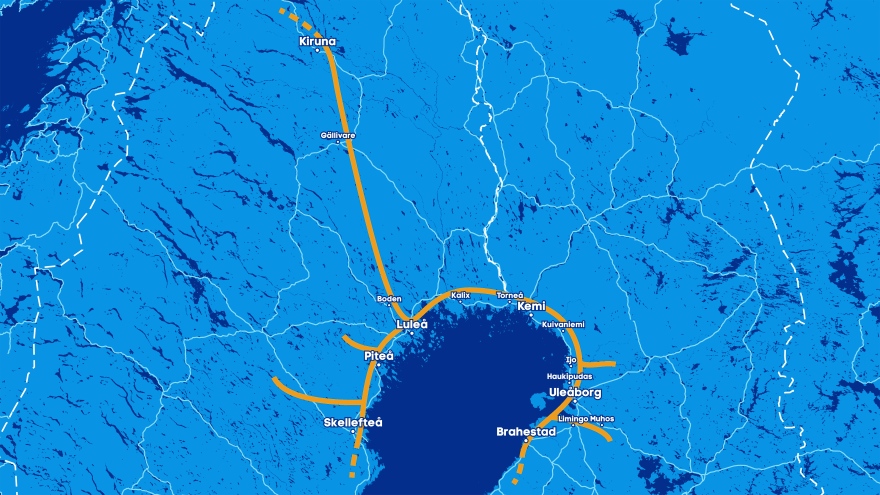 In both Finland and Swedena a prestudy starts for Swedish-Finnish infrastructure for hydrogen along the Bothnian Bay. View original picture , opens in new tab/window

The background to the pre-study, financed by Vinnova, is, among other things, the large industrial investments in fossil-free steel production in northern Sweden and Finland, where very large amounts of green hydrogen are needed. A similar pre-study is being conducted in Finland.

"The major change that is now taking place, not least in northern Sweden, is an industrial revolution that attracts global capital, strengthens Swedish competitiveness and makes industry more sustainable. But conversion requires a changed energy system. We´ll see how a hydrogen infrastructure in interaction with the development of electricity production and the power grid could provide socio-economic and business economic benefits, "Johan Sandstedt says, Research and Business developer at RISE.

"An interesting question linked to the large projects planned in northern Sweden is whether to distribute power to the industry and make the hydrogen on-site, or whether to produce the hydrogen elsewhere and distribute the hydrogen to the industry instead. The issue is very complex and the project is a first step in producing facts that can be used as a basis for decisions, Rikard Gebart says, Professor of Energy Engineering and leader of Luleå University of Technology's hydrogen initiative CH2ESS.

The pre-study is based on the needs and potential in Sweden and Finland. The analysis takes into account the major wind power and hydrogen projects that are underway in the region. The Finnish equivalent of RISE, the research institute VTT, is conducting a similar pre-study in parallel.

"In our pre-study, we will, among other things, analyze how a hydrogen infrastructure around the Gulf of Bothnia can interact with the power grid and where the hydrogen gas can be stored. Our aim is also to develop co-operation networks in Finland and between Finland and Sweden, as well as to map the business opportunities that a hydrogen network in the Finnish Ostrobothnia region provides. The investigation will be completed in the autumn of 2022",  Juha Lehtonen says, a Research Professor VTT Technical Research.

"An infrastructure that connects the various industrial clusters where hydrogen replaces fossil fuels will drive development by improving security of supply, which is positive", Staffan Sandblom says, Head of Hydrogen Development, Fortum.

This pre-study intends to analyse, with a broad approach, the conditions, opportunities, and obstacles for a gas infrastructure in the region and how it could be designed. The pre-study will further establish a collaborative platform for stakeholders, in connection with the ongoing project Swedish Hydrogen Development Center (SHDC) run by RISE and Swerim and the competence centre CH2ESS at Luleå University of Technology .