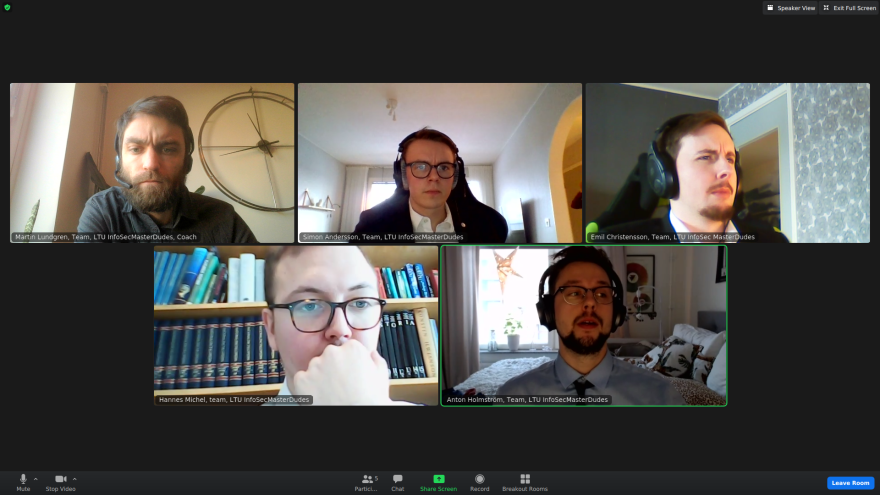 Cyber Challenge is organized by the Swedish Defense University. The purpose of the competition is to increase understanding of cyber attacks, methods and the challenges cyber attacks pose for governments, authorities and citizens. This year, 15 student teams from Swedish universities participated.

The competition began with the team, students Anton Holmström, Emil Christensson, Simon Andersson and Hannes Michel, receiving a situation report on the digital climate in Sweden. The report contained several fictitious risk scenarios that could have a negative impact on the country.

The task was to develop four policy alternatives to stop the development of the scenarios and potentially prevent them from recurring. On the day of the competition, the policies were presented to a panel of judges and eight teams advanced to the semifinals, including the team from Luleå University of Technology.

– After that we received another report that described how the scenarios had escalated and we had two hours to reach a new result. Halfway into the next presentation, we were interrupted and handed another report, now all the scenarios had gone from bad to catastrophic: people died in hospitals that were under cyber attacks, 500,000 households were without electricity and so on. We had barely half an hour to work through the last report and unfortunately we did not find enough short-term solutions in response to the current crisis, says Anton Holmström.

Simon Andersson confirms that time pressure contributed to the difficulties.

– Yes, the most difficult thing was clearly to work on our policies in such a short time. It is really difficult to develop policies that work both long term and short term. When a situation requires that something must be done immediately, a lot must be taken into account if everything is to work well and for all problems to be addressed.

What was the most important thing you learned?

– The importance of working together: it really helps to be a team when you interpret a situation and develop policies based on it. More perspectives contribute to a better overall picture and often a more nuanced picture, says Emil Christensson.

– That the competition consisted of realistic scenarios with realistic conditions. This is exactly something that can happen when you enter working life, says Hannes Michel.

Why is information security so interesting?

– Information security never gets boring, it is a large area that covers many different aspects, everything from technology to management. It is a very dynamic area, it is like a game where potential threats and malicious actors are your opponents, says Anton Holmström.

– Sweden is becoming more and more digital. If we are to be able to develop as a society, it is our responsibility to protect the resources of private and state actors, says Hannes Michel.