The doctorial thesis
The research presented in this thesis has been carried out at the Division of Computer Aided Design at Luleå University of Technology in Sweden. The research project was initiated and supervised by Professor Lennart Karlsson and ProfessorAnnika Stens

In recent years many of the different traditional mechanical and/or hydraulic automotive systems have been replaced or complemented with systems integrated with more or less advanced electronic control units, so called mechatronic systems.

Now the time has come for the mechatronic successor of the hydraulic power brake system and the first step in the development towards Drive-by-Wire: the Electro Hydraulic Brake (EHB) system. This system has no mechanical or hydraulic connections between brake pedal and brake calipers. Sensors and an electronic control system instead control the brake pressure delivered to each caliper. This feature adds another dimensions to the control possibilities of the vehicle brake system and enables adding a wide range of new comfort and safety functions.

The traditional method of working with reduction of stopping distance has been to reduce the actual braking distance by maximizing the deceleration when the driver steps on the brake. However, with the introduction of more advanced control systems it has become possible to attack the problem from a different angle.

The means of this thesis have been to find methods to reduce the reaction time of the driver and the response time of the brake system. There are several meters to cut off the stopping distance since a car at 100 km/h travels 28 meters in one second.

With the help of previous braking behavior and brake system studies together with additional tests and tryouts an additional active emergency braking assist function for the EHB system has been developed. The function identifies the driver's intentions by monitoring the use of the pedals. If an emergency braking situation is identified the function helps the driver to make the stopping process as short as possible.

In recent past, several electronically controlled automotive transmission systems, where wet clutches are used as intelligent differentials, have emerged on the market. These applications generally impose high stresses on the transmission fluids. The fluids must retain the desired frictional characteristics at different torque levels during its lifetime in an environment where the ambient and system temperatures vary in a wide temperature range.

A comprehensive literature review section where the state-of-art in this field is presented gives an insight to many of the problems commonly experienced in this type of application. Different methods to investigate the function of wet clutch transmission fluids are also presented.

Test equipments designed during this thesis work in order to determine the frictional characteristics of transmission fluids are described. These equipments can also be used to measure the actual temperature experienced by the fluid in the contact zone using an infrared temperature measurement method.

Results show the influence of several operating parameters on the frictional behavior of the clutch.

Temperature is shown to have significant influence on the friction characteristics of transmission fluids. The friction decreases with increasing temperature, and it is therefore necessary to measure the correct temperature in the clutch to obtain realistic measurements of friction. 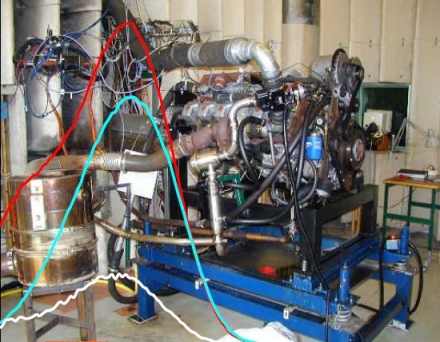 Compression-ignited (CI) engines, commonly known as diesel engines, are widely used power sources with complex emissions used in on-road and nonroad applications. To find out the impact of diesel exhaust emissions on health and the environment, both regulated
and unregulated exhaust gas properties have to be evaluated. Especially, emissions obtained with new fuels and new exhaust gas aftertreatments have to be examined
properly to avoid an increased impact of emissions of harmful substances. This thesis deals with the issue in the following papers: In Paper I, a mixture of acetal and diesel has been investigated in a 9-liter Scania diesel engine. A marked decrease in particle number emissions and the estimated particle mass was obtained when acetal was blended into regular Swedish diesel fuel. A small penalty in engine power was observed, but the net effect was, nevertheless, a reduction in the
emission of carbon dioxide per ESC cycle. Emissions of HC, CO, NOX, some aldehydes and hydrocarbons were only slightly affected by the new fuel composition. An exception was the emission of acetaldehyde, which was almost quadrupled, probably reflecting the
decomposition and oxidation of acetal to acetaldehyde.
In Papers II-IV, the potential to obtain low emissions of particles and NOX from a CI engine, running on ethanol and equipped with exhaust gas recirculation, EGR, catalyst and diesel particle filter, DPF, are investigated. Results obtained from a CI engine
running on ethanol with the ignition improver Beraid were compared with results from a CI engine running on diesel. Both engines were 9-liter Scania CI engines from the same engine family. Paper II covers differences originating from the fuel, together with effects
from EGR, catalyst and the DPF. It was concluded that the emission control system shows a large potential for reducing particles and NOx and that these features could
probably be further improved if the system is optimized for the ethanol fuelled CI engine.
In paper III, the fuels influence on various particle properties was investigated, e.g., particle size and distribution, particle shape, composition and morphology. It was shown that the ethanol fuelled CI engine emitted lower particle mass, particles of smaller sizes and approx. the same or greater number emissions than the diesel fuelled engine. It was also revealed that the solid particles emitted from the ethanol engine are composed mainly of carbon and that the carbon has the same crystallite structure as carbon particles
emitted from engines running on diesel. Furthermore, it was also confirmed that agglomerated particles were dependent upon speed, fuel and emission control.
The purpose of Paper IV was to investigate the fuels as well as the influence of EGR, the catalyst and DPF on four specific aldehydes and 14 individual hydrocarbons. There were both quantitative and qualitative differences between the emitted compounds from the engines running on ethanol and diesel fuel, respectively. The emissions of aldehydes decreased between 56% and 95% when the ethanol fuelled CI engine was equipped with exhaust gas aftertreatment. The corresponding decrease for the diesel fuelled CI engine was between 74% and 94%.

The summarized levels of analyzed emitted hydrocarbons were higher for the diesel fuelled engine compared to the levels emitted from the ethanol fuelled engine. However, the reduction, when connecting the exhaust gas after treatment system to diesel fuelled CI engine was larger, 90 %, than the 47% reduction obtained when the system was connected to the ethanol fuelled CI engine. The exhaust gas aftertreatment system worked more effectively when coupled to the diesel engine. A general conclusion, therefore, is that it should be possible to adjust this system better to reach lower emission levels for the ethanol fuelled CI engine.
Paper V describes how the ethanol fuelled CI engine in Papers II-IV was optimized with different EGR scenarios and tested, both according to stationary (ESC) and transient conditions (ETC). A second DPF was also tested together with an oxidation catalyst.
Particles were clearly affected by the EGR settings and the tested exhaust gas aftertreatment. In fact, when the DPF was used, particulate emissions were lower than
stipulated for onroad regulations, Euro V and EEV. An efficient reduction of NOX emission levels was obtained by applying EGR; depending on exhaust gas aftertreatment,
setting and test cycle used, the reductions of NOX were between 73% and 33%.
Unfortunately, the high reduction of NOX was followed by a concomitant increase of CO, HC and particulate matter, PM, together with fuel penalty. The remedy for the higher
emission levels of HC, CO and PM was an oxidation catalyst and a DPF.
A humid air motor system (HAM) for reduction of NOX was investigated in paper VI.
Earlier studies have demonstrated that the system has a capacity to lower NOX emissions from heavy duty diesel fuelled CI engines. The study aimed to investigate the HAM system´s influence on the emissions of particles, which generally increased, contrary to aldehyde emissions, which decreased and also to monitor essential engine parameters, water consumption, and also to verify the reducing ability. The NOX reduction capability
was verified to be 51% without any optimization.
The complex nature of exhaust gas makes it impossible to analyze all properties of the exhaust. The work in this thesis has been focused on particles, particle properties and emissions of unregulated compounds, in order to elucidate aspects exhaust of other than
the one obtained when measuring regulated emissions.