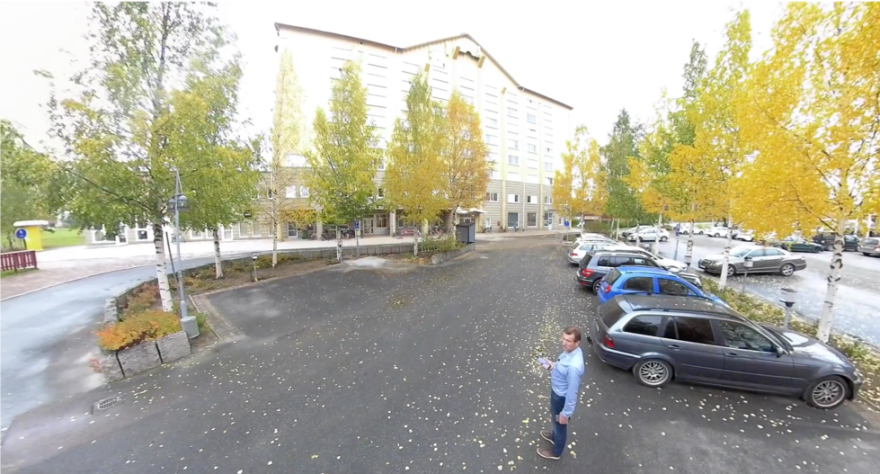 Project manager Arne Gylling talked, among other things, about how it is done when you as a company come and test in the environment. A 360-degree camera showed around the environment both outside and inside.

One of the projects that participated in arranging the webinar was the AI DIH North project. Artificial intelligence and 5G are technologies that reinforce each other. 5G transports data and information, enables huge amounts of data to be sent at extremely high speeds to unimaginably many devices, while artificial intelligence analyzes and offers opportunities for more efficient solutions. An example of this is the robotics group at the university that flies autonomous drones connected to 5G. This means that as soon as the drone has left the ground, there is no pilot in control. The drone is programmed to use AI to analyze its surroundings and make its own decisions, for example to be able to independently avoid obstacles. Autonomous drones can be used in many areas, for example to carry out risky inspections such as in mines. The robotics group is world-class in terms of robotics and drone technology, has won prestigious awards and collaborates with NASA.

- With the help of robotics, intelligent automation and simulation, very difficult and dangerous tasks can be performed. This is a growing subject area, both nationally and internationally. Robotics and artificial intelligence, for example, have been identified by the European Commission as one of the most important subject areas in the Horizon Europe 2021–2017 research initiative, said George Nikolakopoulos, professor of robotics and automation.

One of the companies that is involved and will conduct tests in the 5G environment is Compodium. It is a Luleå based company that delivers services in digital video conferencing and was the first in the world to provide secure digital care rooms. Bengt Grahn, founder of the company, said that he thinks it is super exciting to be involved and put his services on the latest radio technology.

Finally, the student Jesper Gladh was interviewed, who is now doing his ex-job in 5G and Virtual Reality at Ericsson.

The 5G environment is open and welcomes organizations to test products and services and is run together with Ericsson, Telia and Tieto Evry. The webinar was part of the EU's digital information campaign "My Europe", which is about disseminating information about EU-funded projects.