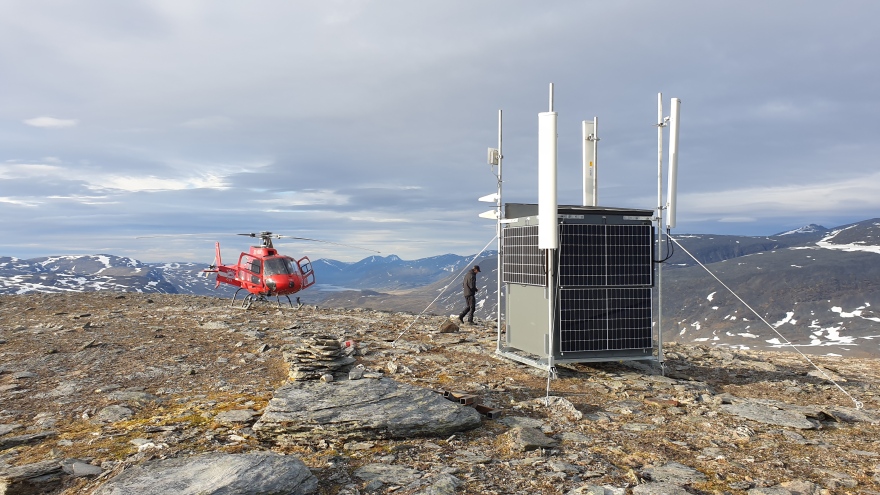 The #fulltäckning project aims to reduce digital alienation by increasing mobile coverage in rural areas – and thereby create opportunities for more people to live and work there.

Read more about the project and the participants at fulltäckning.se

Currently, there is only patchy mobile coverage in the Swedish mountain world, something that can cause problems. In time for the calf marking this summer, Jon-Anders Svonni, a member of Gabna Sami village, hopes that a hotspot installation next to the summer pasture at Rovvidievva southwest of Abiskojaure will be in place. It is a smaller base station in the form of a shed with an antenna, which will provide better mobile network and telephony in the area. During the bright months, March to October, the entire installation will hopefully be powered by solar cells:

– The goal is having cell phone coverage. Nowadays, you can sometimes get some coverage with a directional antenna, but that does not always work. The idea and hope is that everyone will soon be able to call from the summer pastures. It is a great security to be able to call 112 if something should happen, he says.

The digital spots of the countryside

Annika Svensson works as a project manager at the Centre for Distance-Spanning Technology at Luleå University of Technology, which coordinates the project #fulltäckning. She believes that the problem of inadequate mobile coverage ranges from the coast to the mountain world, while the ability to use your mobile phone is important no matter where you are. Good mobile coverage makes it possible to call for help, use security alarms or simply live in the countryside and have a remote job.

– The national goal for mobile coverage is formulated so that it only covers places where there are people registered. This means, among other things, that the network is not dimensioned for the archipelago, where – in addition to residents – there are also many people who live in their cottages for large parts of the year or are tourists. This is also the reason why there is no mobile coverage along Kungsleden or at the summer residence in Sápmi, says Annika Svensson.

The hope is that within the framework of the project, a mast will now be set up in the Luleå archipelago, with the aim of increasing the coverage there. Mats Gustafsson, who has lived on Storbrändön since 2010, runs an IT company from home and says that the coverage can differ greatly between different households.

– For me, things run pretty well, but the network is weather sensitive and others may need to leave home to talk – or sometimes have coverage in the kitchen but not in the TV room. Many people have problems with mobile broadband and have to run extra antennas. In addition, a lot of things these days are digitalized, such as remote-controlled air source heat pumps and streaming services, he says.

The base station in the mountain environment at Rovvidievva southwest of Abiskojaure will also be an important link to the three installations that #fulltäckning made at Laevas Sami village summer pasture in Alesjaure south of Abisko. It was precisely the new mobile coverage in Alesjaure that attracted Gabna Sami village to try.

– This is a spin-off from Laevas' project. I was there and helped with the assembly of the sheds, and thought that the same thing would have been very good for us. A positive effect is that our shed will also be an important link for Leavas network, he says.

But it is not just for Gabna Sami village that there will be positive effects, Jon-Anders Svonni explains:

– Hopefully, everything will be ready by this summer. Networks and telephony will not be available to everyone but require some form of subscription, but you will always be able to alert 112 via these installations, which is good for tourism, mountain rescue services, and other emergency services.

Read more about the project