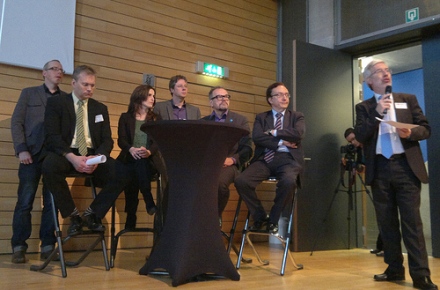 Representatives of Apollo and Fireball attended the conference User-driven Open Innovation Ecosystems go really Local ... Across Borders. Both projects were participating as organizers and arranged interactive workshops, lecturing on the project's content and results, and participated in panel discussions. The conference was conducted in collaboration with the European Commission, DG Information Society and Media, Apollo, Open Cities, Fireball, Enoll and Eurocities.

After the conference, final review meetings were held with both Apollo and Fireball. Michael Nilsson is satisfied with what the project accomplished during his two years. A total of 17 partners has been involved; European companies, universities and cities.

– It's all about finding networks, and use each other's strengths. What does the future look like, where are we heading? Michael Nilsson asks rhetorically.

– The work has resulted in shared increased knowledge. If we share our experiences, we do not need to reinvent the wheel.

Project Fireball has among other things, aimed to coordinate the so-called Smart cities across Europe. The idea is to create partnerships for User-driven open innovation and thereby open up new possibilities for Future internet.

The Apollo project has sought methods and tools for more effective and cross-border Living labs.