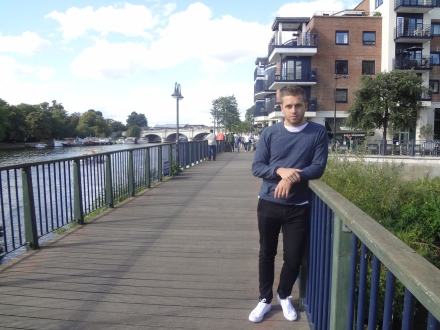 What was the background to your thesis?
– Facebook Data Center in Lulea took the decision to install a new internal network for Facilities, which could then replace their previous network that was in operation during the time the new network was installed. The network would be replaced because the structure was too old-fashioned, which caused problems with redundancy if any link in the network would suddenly be broken. The project was called "Facility Network" (FacNet) and the network would be used by facilities where their role is to monitor, among other things as cooling system and power supply for the server rooms. Software upgrades was performed on the routers and switches which were used in the project.

And what was the purpose with your thesis in this?
– Well, it was to show how I have gone about and done my project during the five weeks period.

Tell us more about it.
– The goal of the work was to install an internal network that would replace another internal network. These units were installed later in the respective racks. Software upgrade was performed on the routers and switches used in the project. Finally, tests were conducted on the new network to make sure that the network was ready to go into production.

Did it work?
– Yes, the network passed all the tests that were run and were ready to be deployed.

How was your thesis received by Facebook?
– The tasks to be carried out was performed and the network was ready to be deployed. They appreciated my work and thanked for my efforts that had been carried out during the five weeks.

What are you planning to do next?
– I will start my employment at an IT consulting company in Luleå with a 1 year long trainee program and hopefully become a part of the company as an IT consultant.
Published:15 September 2014
Updated: 17 September 2014
By:Marie Nolin
Edit page , opens in new tab/window