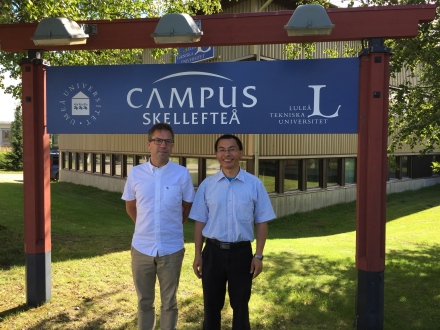 Information om föredraget:
Networks are becoming increasingly complex and service providers incorporate additional functionality in the network to protect, manage and improve service performance. Software-Defined Networking (SDN) seeks to manage the network with the help of a (logically) centralized control plane. We observe that current SDN solutions pre-translate policy (what) into forwarding rules at specific switches (where). We argue that this choice limits the dynamicity, flexibility and reliability that a software-based network could provide. Information Centric Networking (ICN) shifts the focus of networks away from being predominantly location oriented communication environments. We believe ICN can significantly improve the flexibility for network management. In this work, we focus on one of the problems of network management - service chaining - the steering of flows through the different network functions needed, before it is delivered to the destination. We propose Function-Centric Service Chaining (FCSC), a solution that exploits ICN to provide flexibility in managing networks that utilize virtualization to dynamically place functions in the network as required. We use a real-world topology to compare the performance of FCSC and a more "traditional" SDN solution. We show that FCSC reacts to failures with fewer packet drops, adapts to new middleboxes more quickly, and maintains less state in the network.

Information om Professor Xiaoming Fu:
Prof. Xiaoming Fu (M'02 - SM'09) received his Ph.D. in computer science from Tsinghua University, Beijing, China in 2000. He was then a research staff at the Technical University Berlin until joining the faculty at the University of Goettingen, Germany in 2002, where he has been a professor in computer science and heading the Computer Networks Group since 2007. He has spent research visits at universities of Cambridge, Columbia, UCLA, Tsinghua, Nanjing, Fudan, Uppsala, and UPMC. Prof. Fu's research interests include network architectures, protocols, and applications. He is currently an editorial board member of IEEE Communications Magazine, IEEE Transactions on Network and Service Management, Elsevier Computer Networks, and Computer Communications, and has served on the organization or program committees of  leading conferences such as INFOCOM, ICNP, ICDCS, MOBICOM, MOBIHOC. He has served as secretary (2008-2010) and vice chair (2010-2012) of the IEEE Communications Society Technical Committee on Computer Communications (TCCC), and chair (2011-2013) of the Internet Technical Committee (ITC) of the IEEE Communications Society and the Internet Society. He has been involved in FP6 ENABLE, VIDIOS, Daidalos-II and MING-T projects and is the coordinator of  FP7 GreenICN, MobileCloud and CleanSky projects. Prof. Fu is the recipient of the ACM ICN 2014 Best Paper Award, IEEE LANMAN 2013 Best Paper Award and the 2005 University of Goettingen Foundation Award for Exceptional Publications by Young Scholars. He is an IEEE Communications Society Distinguished Lecturer.