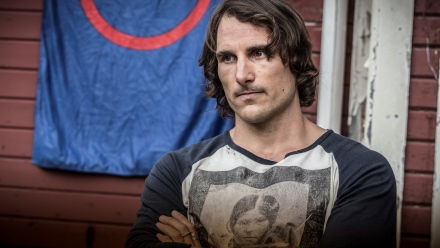 Oscar Skagerberg is an alumnus of Bachelor of Arts in Acting programme.  He studied in Lulea from 2005-2009. He is currently involved in the Franco-Swedish thriller series Midnight Sun set in Kiruna and Paris which was broadcast on SVT in the autumn and now in several other countries. The series is directed by Björn Stein and the screenplay was written by Måns Mårlind. Oscar plays the role of Christopher Hanki, the leader of the Young Sami Association fighting for Sami rights and opposes the relocation of the city.

Hello, Oscar. How did it feel to return to Norrbotten again for the filming of Midnight Sun?

Like coming home again. After 4 years in Lulea and by various tours and travels, I have been virtually the entire Norrbotten. So Norrbotten and its inhabitants have a big place in my heart. Peace and nature is something I often long for.

What would you say was the best with your training and studying in Lulea?

To come to a new city, with lovely people, a "manana" mentality, which really appealed to me. That is more important than where you are going. The training gave me a professionalism both on and off the stage. The only thing that I could miss was that the school was not on campus. Would have met students with other specializations and taken part more of student life.

What is the future for you, what happens next?

Right now I'm just down to the Gothenburg Film Festival for an audience interview about my work and how I see it. Then it's off to the Berlin Film Festival. Also works on four projects, where I am already in the production stage. Two TV series and two feature films. So I try to go more to come in earlier in the projects. Last but not least, begin to move overseas and take advantage of "Midnattssols" successes.