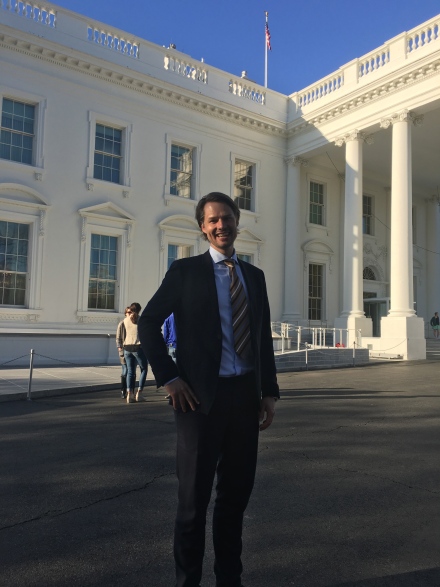 You are currently working at the Swedish Embassy in Washington, you want to tell me what you're working on and what the best thing about your job?

I am Science & Innovation Counselor, which means I is Sweden's representative in the United States on issues related to higher education, research and innovation. The best thing about the job is that it is a mixture of classic diplomatic work and analysis work more like academia. Right now I do, for example, three separate studies involving EdTech / Education Technology as a growth industry, President Obama's seven-year work on cybersecurity and what is required of the policy of the Internet of Things will become widespread in industry and society. At the same time I put the program for our higher education and research as visiting Washington in a few weeks for instance, take part in the Arctic Mini Trial Meeting at the White House. Then I wait with bated breath whether there will be some American Nobel Prize winners this year - it tends to be a handful each year. We always invite this year's US award winners at a public seminar at the House of Sweden, then they get to meet US President and reception at Blair House, full day ends with a dinner with invited guests at the Swedish ambassador's residence here in Washington DC.

To gain an insight into politics and diplomacy World Capital is the best work - in my work, it is obvious that extremely good reputation Sweden has in the United States, not least in the areas that I represent.

What was it that made ​​you got your current job?

It probably can anyone respond best to. I hope it's because I've done well in the past - since it is obviously a lot of chance too. One requirement is to have a doctorate, and then I have to say the least a sprawling background that might be desirable for this type of job. After the defense at LTU, I returned to Stanford University in California for a mini-postdoc, then I moved back to Sweden and has since been a management consultant, presenter on research funding VINNOVA, started their own business, working with Market Analysis at LKAB and has been thematically responsible for innovation issues Growth Analysis foreign offices in Brazil, India, Japan, China and the United States. Apparently lacking a common thread in what I have been doing in the past.

What did you study at the university and what was the best with your studies / studies?

I started to read MSc open entrance and chose late industrial economy with emphasis on technical design and business strategy. I had no thoughts of doing a PhD, but when I met Thomas Stock, who later became my supervisor, I changed my mind quickly. Best of studies at the university was that it gave me the opportunity to take the liberty to do whatever I wanted. Among other things, I did an exchange semester in Singapore in civil engineering studies and then I lived during doctoral studies a year in Tokyo and six months in San Francisco / Palo Alto. I have had the privilege of very fine mentors, among other things, my supervisor Thomas but also Rolf Back at the Division, LKAB's former CEO Lars-Eric Aaro, who was president of the research center I belonged, has also been a source of inspiration. Then I could play basketball in my parent club Sunderby SK throughout the study, which is not to underestimate.

Among the most fun with my current job is that each term has an intern at my unit from Sweden, it's always fun to see how they grow with the task. Should I give advice to those who will enter the labor market is to avoid believing everything stands and falls with the first job, there is also no template for working life, do what you think is fun, challenging and stimulating. Another is that many people talk about first impressions, I think it's even becoming slower to finish in style. Try to learn as much as you can just to those you work with, both managers and colleagues. Get a mentor, someone who can give constructive criticism and who knows you well, it need not be someone from work. Some talk about the importance of networking, I think it is better to have a few key contacts you know well, rather than the hundreds or thousands on LinkedIn, it's pretty clear here in Washington, DC, to be proffsminglare without having something to offer to take you nowhere.

How do you see the future, what happens next?

The conclusion of my thesis was that in a changing world is the adaptability and flexibility to be preferred over detailed plans, I usually because most try not to plan and instead try to take advantage of the opportunities that arise.I hope it's something that's inspiring and stimulating while the right bit uncomfortable.