In 2011, the Vice-Chancellor ensured that an additional strategic investment of SEK 2 million was allocated to the university's Student Activities Fun. The funds must be used over a 5-10 year period with the purpose of promoting the social environment at the university in order to increase student satisfaction and their study results.

The Fund's Board of Directors consists of the President, Head of Student Services and the Chairman of both student unions. The Board meets once per semester and decides on the allocation of the funds. The deadline for applications to the various meetings are October 15th and April 15th.

Consider the following when applying:

Some examples of successful applications in 2014: 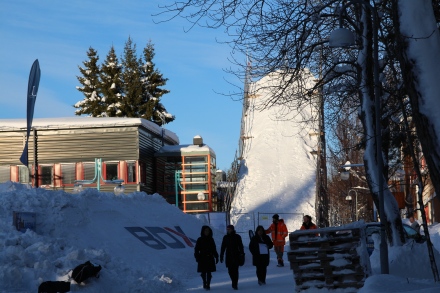 StilL Alpina received grants to LTU Big Air, which took place on 6 February 2015. Previously, the competition was based in Måttsund, but thanks to, among other things, funding from the Student Social Fun it was possible to hold the event in the center of campus of the university Rail Arena. The competition consisted of a 12 meter high ramp where skiers and snowboarders competed for the coolest trick. A DJ and an announcer hosted the event which was broadcast live on the big screen. The event drew over 1000 spectators. Link: Film LTU Big Air 2015

Dating back from the 1970s, Geolusset,  Luleå University of Technology's oldest ball is the only ball at the university which is open to all students. It was threatened last year when one of the main contributors withdrew funding. Thanks to contributions from the Student Social Fund, it was able to continue for another great year.

The Luleå chapter of the student group, Engineers Without Borders, organized a Christmas Bazaar for the students in the atrium on 3 December with funds granted from the Student Social Fund.

Donate to the Student Activities Fund:

It is possible to make a contribution to the fund. This is done through a deposit at Luleå University of Technology bank giro: 5050-0495.  Mark the payment with "Project Number: 805530" as well as the name of the sender.