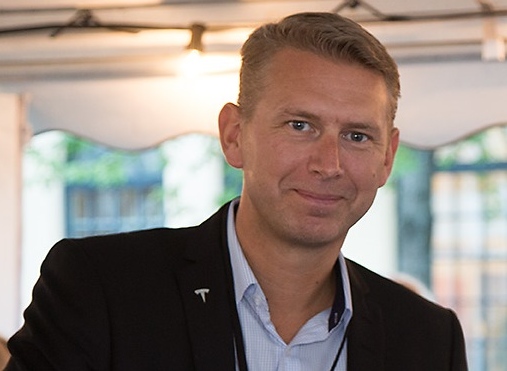 - Many people have come to Tesla because of the incredibly strong vision, the will and passion of the company to transform the automotive industry. It gives a special feeling and, commitment of the employees, as one can find in small startups, but which Tesla managed to maintain, despite having now passed 10,000 employees, says Peter Carlsson.

He is featured in Sweden and abroad, Peter Carlsson, since he in 2011 became Vice President, Supply Chain, for the Silicon Valley company Tesla, an upstart and a challenger to the traditional car industry in the world that have significantly higher annual volumes and incomparable capital investments. He was recruited for the task of building a global purchasing, logistics and industrialization function at Tesla. This means that Peter Carlsson is responsible for purchasing, all the logistics of materials to the factories - and to finally get the finished cars to customers. His experience from Ericsson's growth on the mobile side has been extremely important to him when he based organization and working in Tesla. One goal is to reduce the costs of vehicle production. The price tag on Tesla's electric cars is around 800 000 SEK.

The company with few goals

Tesla Motors was founded in 2003 by a group of engineers in Silicon Valley who wanted to prove that electric cars can be better than petrol cars. Tesla markets itself as the company with the mission, to accelerate the world's transition to sustainable transportation.

- The company has been very clear in its message and has quite a few goals, right now it is about to launch the Model X in time and to scale up production of the new stationary batteries. Elon Musk (founder and CEO) always ensure that it is clear what is the priority at all times, says Peter Carlsson.

- All employees with a critical problem to solve, is expected to work around the clock until you have solved it, he says.

Next door to Stanford University

Peter Carlsson is based in Palo Alto, California, where Tesla's headquarter is located. He lives opposite Stanford University, one of the world's most prestigious universities, where many of the world's Nobel Prize winners studied. Stanford's business park, the Stanford Research Park, originally the Stanford Industrial Park, was one of the first in the world with a focus on high technology - and contributed to the emergence of precisely Silicon Valley.

Peter Carlsson took the prestigious job at Tesla, although he did lose much in salary.

- First visit to Tesla was incredibly inspiring. There was an incredible energy in the office, a bit like a trading rooms on Wall Street or a newsroom. The people Elon had recruited around him was incredibly impressed and when I got to testdrive a couple of prototype vehicles, I knew that something big was in the offing. I met Elon Musk two weeks later in LA, and was completely sold, so I took a hefty pay cut and moved to Palo Alto, says Peter Carlsson.

Peter Carlsson has a business degree with a specialization in production and quality control from Luleå University of Technology and says that he had some of his best years in Luleå. The combination of education, the intimate environment and the life-long friends from that time has been important in his career.

- The knowledge that I had with me about the production and quality control from Luleå University of Technology meant an awful lot when we built up an approach for how we could scale up all mobile providers in the 90s. I had the privilege to visit and study in detail hundreds of factories and production processes early in my career and it has given me a lot of references later in my career. Then, well passion and perseverance added features that have been important for my career. If I'm not really passionate about a product or service, I will not perform at my best, he says.

His advice to those who graduate today from Luleå University of Technology in similar areas:

- Follow your passion, choose organizations that grow and gain work experience from various parts of the world, says Peter Carlsson

Master Programme in Business and Economics

Bachelor Programme in Business and Economics