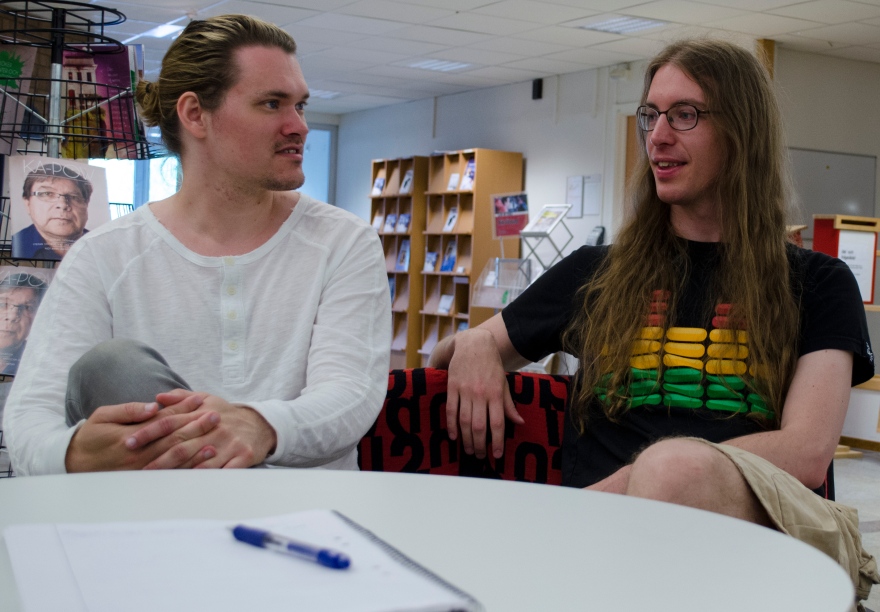 Jörgen Häll and Kristofer Morhed, two of the participants in the Sunday Club. Photo: Anna Åström

The five students Alfred Jimenez, Olle Sundström, Mikael Mannberg, Jörgen Häll and Kristofer Morhed have their education Music, artistic candidate in common. There follows naturally an interest in music, and after that regularly have met to discuss music for two years, hatched the idea to create a podcast that reaches an public.

- I think it was Alfred and Mikael who said he had sent an application to the Youth Board. When we got it, the plan is to publish a new podcast every week for a year. We have already done two pieces conaining discussions relating to classical music of all kinds, says Jörgen Häll.

The name Sunday Club is a wink to the Monday Group, which was an association of Swedish composers, musicians and music scholars who regularly socialized and discussed the composition on Mondays from 1944 until the end of the 1940s. Sunday club is more focused on, with the starting point in the classical music, making contemporary music accessible.

- Sunday is generally a better day than Monday, why we changed the day. With our little humorous program, we want to somehow bridge the gap between modern man and the modern art music. You do not need a fine education to listen to this music, rather the opposite, says Kristofer Morhed.

Community grant from the National Youth Service, Youth in Europe, is on 62 000kr and the with that money the Sunday club plans to visit festivals where they can find stories for his podcast. Closest is Festival in Piteå.

– Besides focusing on coverage of the concerts we'll also try to interview active composers and musicians of different styles. Some trips have actually already been planned, including Uppsala Guitar Festival and already visited "New Directions" in Luleå. Moreover, Alfred will be studying Master, Composition in New York, and he will thus report current events and interviewing artists there, says Mikael Mannberg.