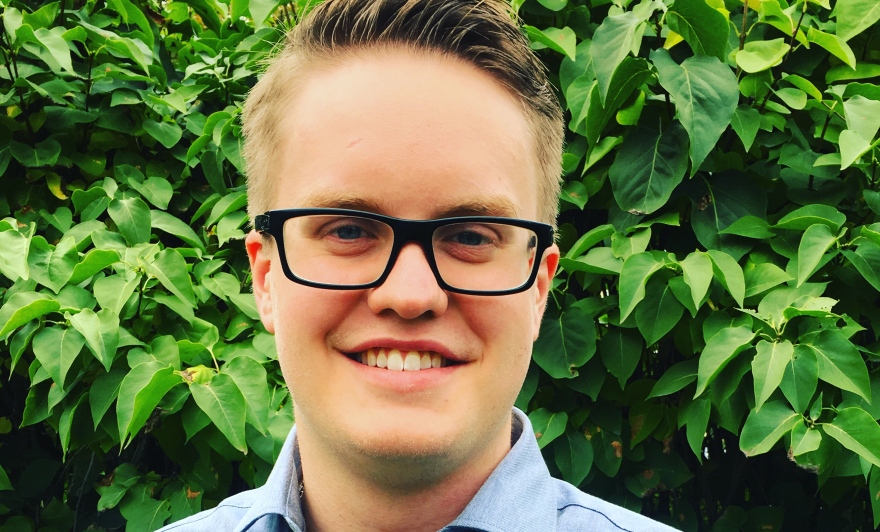 The Lilla Polhemspriset is awarded annually by the Swedish Association of Graduate Engineers for the best degree project at the Master's degree program or equivalent in Sweden. The prize consists of SEK 50,000 and is awarded at the Polhems party on October 19th. The nominations are made by Sweden's higher education institutions that have the opportunity to nominate two jobs each.

"This was a very nice surprise I have to say! I was told earlier this spring that I was nominated. That I would get the price was nothing I had believed in. To find out that I'm the one who is actually awarded the prize feels really honorable, and of course really fun, says Albin Nilsson, who is Luleå University of Technology's first winner of the prize.

From the forest industry's solid fuel boilers, as well as from municipal bio-power plants, large quantities of ashes contain valuable minerals, which can therefore be used for forest fertilization. The ash can be used to upgrade biogas to vehicle gas by absorbing hydrogen sulphide and carbon dioxide from the biogas, which produces a carbonated ash. In order to practically return the carbonated ash to the wood, it is required that it is available as a granule of appropriate size.

"In my degree project, I was able to show that wet granulation, with only minimal addition of bentonite, is an appropriate method of use to increase product size," says Albin Nilsson.

The lacquer properties, which are important properties of the final ash product, were not affected by granulation, as solid calcium hydroxide bridges bind together carbonated ash alone. These bonds quickly break up upon contact with water, which exposes the ash particles from the granular structure.

"Albin is hugely talented and succeeded with something that very few could handle. Within just three weeks, he managed to take on the granulation theory, arrange the equipment, tailor the granulation parameters for the ashes in connection with a statistical study, and build a simple test device, thus measuring the strength of the granules. He obviously encountered various kinds of problems, but solved everyone in the best possible way. Without feeling the other nominees, I think Albin is a worthy winner", says Johanne Mouzon, Assistant Professor of Chemical Engineering at Luleå University of Technology.

The thesis work was performed on behalf of Processum in Örnsköldsvik.

"We congratulate Albin Nilsson on the excellent achievement of the degree project. The result is interesting and is an important part of our development work to utilize the large amounts of ash generated in the forest industry and in bio-fired heat plants. Because the ash first cleans biogas and then forest manure makes it double benefit", says Gunnar Westin, Business Developer at RISE Processum in Örnsköldsvik and supervisor for this degree project.

Engineer from Ö-vik is praised for his method
ALLEHANDA