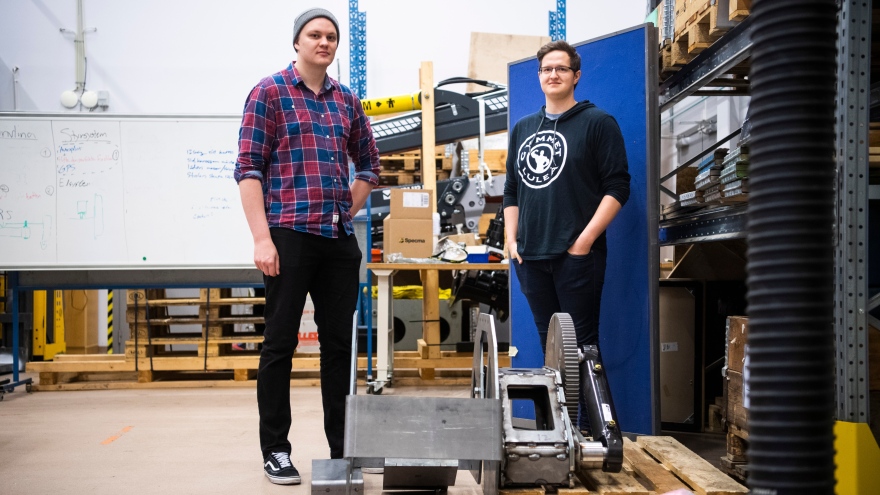 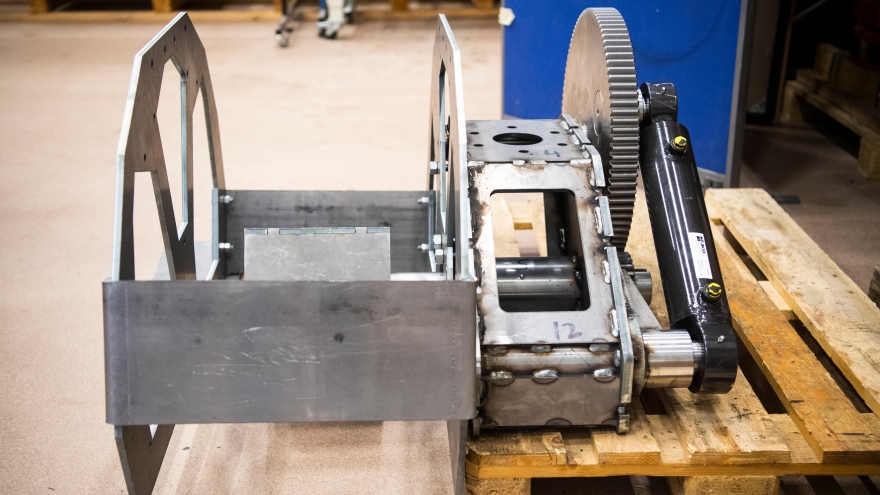 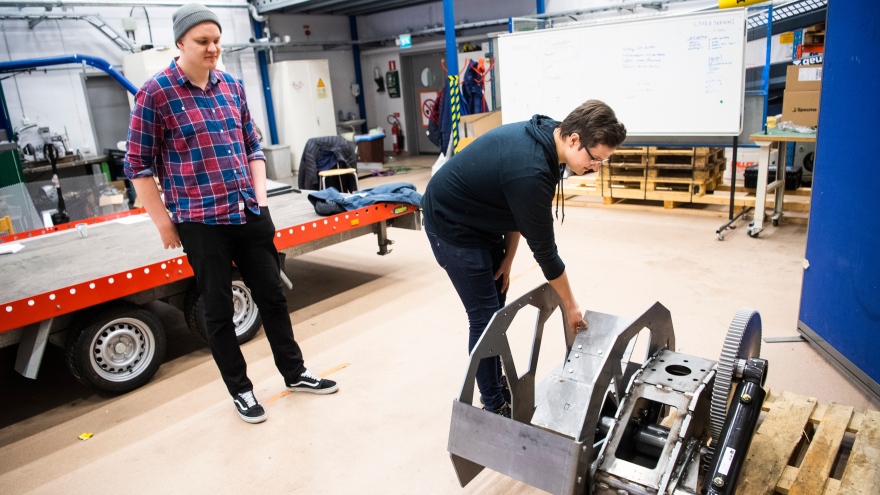 All projects in Sirius 19

BAE Systems Hägglunds: Further develop the driveline for the BvS10 Beowulf all-terrain tracked vehicle.
Skogstekniska klustret: Develop an inversion ground preparation rig that is more environmentally friendly than today's solutions.
Husqvarna Group: Create a functioning test rig to provide increased knowledge of how the material in saw chains should be manufactured to increase tool life.
Sandvik Coromant: Develop a prototype for a smaller and faster milling machine.
Scania: Improve the cooling system in buses to reduce noise.
Volvo Construction Equipment: Simulate a gravel pit to predict how the site will change over time and what the machines' service needs look like, develop a concept that is smooth as a wheel loader but takes up less space and create a computer simulation model for buckets to avoid conventional prototype testing.

The project group, consisting of students Anders Nilsson, Hampus Persson, Kalle Rehnström and Samuel Hedström, worked with their prototype for inverse soil preparationon on assignment for "Skogstekniska klustret", an association of about ten companies in the Swedish forest machine industry.
In short, the method involves digging up soil during soil preparation, turning it over, putting it back in the pit and then planting on the same spot. The reason is that the new plants easier will make use of the soil's minerals and, in the long run, survive better. This way of soil preparation causes less soil damage than conventional tillage, something that is becoming increasingly important in forestry. The group's developed units handle all steps in the process except planting.
– The idea from the beginning was that the aggregate would also handle the planting, but we realized quite quickly that we would not have the opportunity to solve it within the framework of this course, says Samuel Hedström.

Aggregates for inverse ground preparation are already on the market, but the group's prototype makes it possible for the vehicle that it is connected to to be in constant motion. Something that is not possible today.
– With the aggregates that exist today, the machine must stop for every pit that is dug, the idea with this unit is that the machine can be in constant motion, which makes the work more efficient, says Samuel Hedström.
The prototype that the group has made is a test rig, and the idea is that it should be adapted based on what the tests shows.
– Hopefully it can be made much smaller, something that the tests will show. We hope it will be so light and flexible so that it can be driven behind a quad bike, says Samuel Hedström.

During the course of the work, the group has followed a special process for product development, in which one initially creates a requirements specification according to what the market demands. Then you can, for example, weigh cost and efficiency against, as in this example, soil damage.
– Our prototype will never be able to compete with a harrow in efficiency, but since today's forestry really needs to minimize soil damage, this concept wins, says Samuel Hedström.

Both Samuel Hedström and Kalle Rehnström highlights how rewarding it has been to work in such a reality-oriented project.
– Having a fixed framework and a limited budget means that we are forced to develop. You have to adjust the project along the course of the journey, compromise and find solutions. Of course, if we had had unlimited money, we could have implemented better solutions, but now we had a budget to relate to. Just as in real life, says Samuel Hedström.
Another valuable part of the project is, according to the group, that most contact has been with the industry rather than supervisors at the university.
– It is a great lesson learned – that there are experts. Ask questions and hand over the work to them instead of welding yourself, for example, says Samuel Hedström.

For the group, which has worked with the prototype since March last year, degree projects are now waiting.