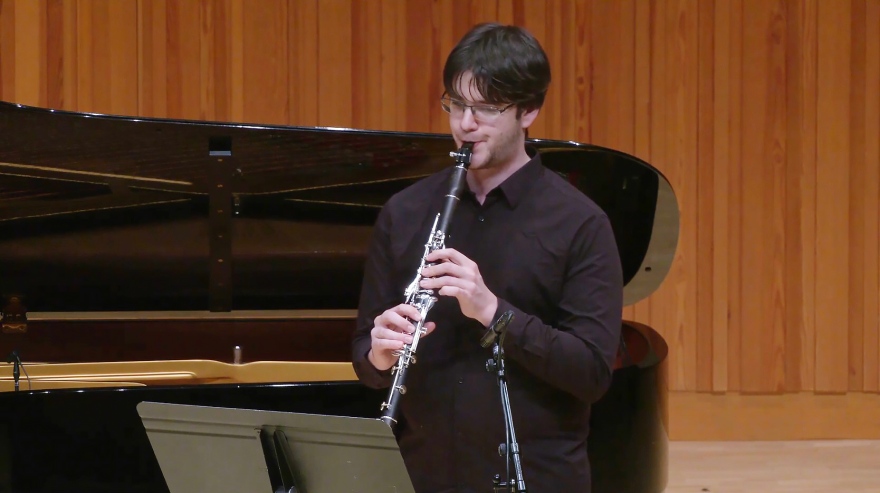 Vadstena Academy is a small opera house in southern Sweden with the mission to vitalise the opera genre by performing contemporary music or older music that is undeservedly forgotten. The participators in the Academy’s production are all either students or in the beginning of their career and they are supervised by experienced professionals in the field.

–      I am surprised but grateful, says José Luis Relova Gallego.

The scholarship to José Luis Relova Gallego was received from the Fund in Memory of Ingrid Maria Rappe. During his stay at Vadstena Academy he played clarinet in “Breaking the Waves” – a modern opera with music by Missy Mazzoli and libretto by Royce Vavrek first performed at Opera Philadelphia, USA 2016.

– I was surprised that I received the scholarship. It is not the kind of music where you get the chance to shine as a protagonist, we mostly have the role of accompanying the soloist and setting the different atmospheres. I am glad nonetheless I got the chance to play since I am very interested in contemporary music.

In Vadstena he also played “Gnarly Buttons” a clarinet concerto by the American composer John Adams.

–      It was a unique experience for me to play as a soloist with a small chamber orchestra. All the musicians were very talented and passionate about their craft. I believe they awarded me the scholarship partly because I had to play the concerto as a soloist and they wanted to acknowledge my effort as a musician.

The clarinet was not his first choice

The clarinet was not his preferred instrument when he was a child, it wasn’t even his second choice.

–      I listened to Peter and the Wolf by Prokofiev, and I really liked the bassoon, but my parents could not afford such an expensive instrument, then I suggested the oboe. My uncle –who is also a musician– advised my parents to choose a less "difficult" instrument for a child since making reeds is something you need a lot of discipline for. But I am very glad I picked the clarinet; it is a part of me and I think if I had picked differently, I would not be the same person. [SW1]

As it happens, Saúl Canosa, a clarinetist who was to become his teacher started teaching on a newly built music school in Santiago de Compostela where Jose Luis Revolva Gallego grew up. He inspired José Luis Relova Gallego to play the clarinet. Through the years the instrument has become very dear to him.

An instrument with many colours

–      Saúl was my first teacher. He taught me to be respectful towards my craft as a musician. After my education with him I went to Zaragoza to study my bachelor with Francisco García. This part of my life was one of the most enriching musically and personally since it was the first time I lived away from home. Many of my best friends nowadays are from this period. I continued my education in Barcelona where I did my first master with Isaac Rodriguez who I very much respect and admire. This instrument has so many colours, and it can be like a chameleon and for that it is used in so many genres. It also conveys such a wide range of emotions with ease, and it has the ability to produce from the nastiest of the sounds to the most beautiful ones.

However, when it was time to choose a subject for higher education, he was unsure. He began both physics and music bachelor in 2015. After a while he realized he would feel more fulfilled as a musician than as a physician and continued with the clarinet. But he thinks that knowing mathematics and physics can be useful for a musician.

– Music, especially contemporary music, is based on divisions and fractions. Contemporary music has a lot of unconventional ratios in rhythms. The knowledge of mathematics helps you approach musical "challenges" in a different way.

It was his first clarinet teacher, Saúl Canosa, who made José Luis Relova Gallego take an interest in contemporary music.

–      There is so much that I like about contemporary music. Contrary to old music you can talk with the composer to better understand what their intention is with the piece. I also think that composers today can be freer in their artistic expression compared to composers in the times of Mozart and Bach who had to compose for their survival.

It was his passion for contemporary music who took him to Piteå and the master programme International Contemporary Music Academy that was given together with the chamber ensemble Norrbotten NEO.

Contemporary music took him to Piteå

–      I was very happy to come to Sweden in 2019 for the first time to work in contemporary music projects. Unfortunately, many projects got cancelled because of corona, still we got many experiences both as performer and audience. We attended a concert by Norrbotten NEO. It was a piece called Solstice. The piece was performed in total darkness. Suddenly the percussionist started to scream. As part of the audience, we did not know what is happening but as for me I felt a primal fear. This is what I like about contemporary music: you can only expect the unexpected.

–      Robert Ek is not only an amazing clarinetist but a very good mentor. My experience from Spain is that many teachers there try to fix all problems at once.  Robert’s approach is so precise. He tells you what to focus on and take it from there onwards, step by step.

José Luis Gallego has finished his studies in Piteå this summer. It is not only music that made him stay in Piteå. His girlfriend from Boden completed her bachelor in singing one year before.

–      I like it in Piteå. It is a quiet place, and it suits me as a person and as a musician. I also like Sweden and Swedish culture including the surströmming, says José Luis Gallego and laughs.

– people are kind and the working environment is something that many would love to have. During these three years I got many good experiences and if I get the opportunity to work in Sweden I would come without a doubt.

Surströmming is fermented herring. It is a popular dish, especially in northern Sweden, around autumn. It has a pungent smell.