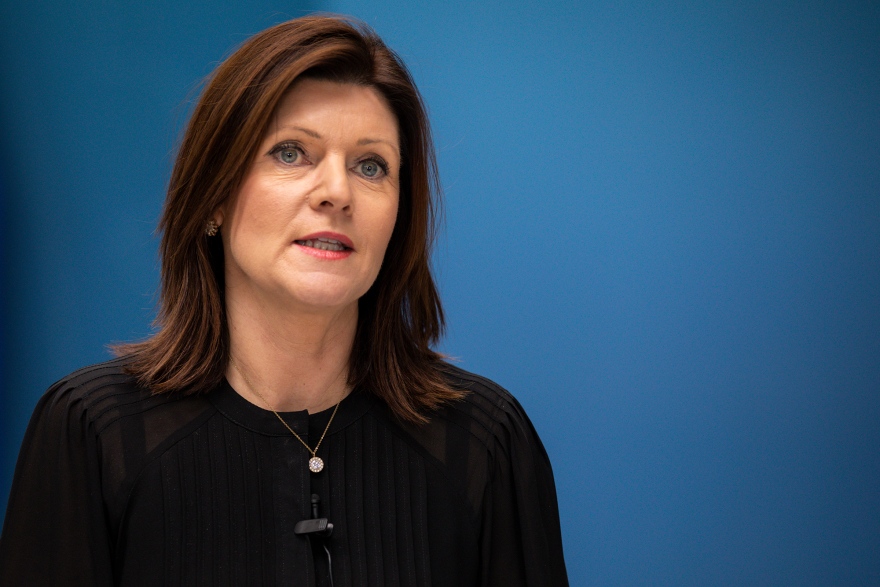 “I remember how proud we were to represent a relatively young higher education institution in strong growth that dared to think outside the box", says Eva Nordmark, former Minister om Employment and Alumnus of the Year 2022. Photo: Ninni Andersson/Regeringskontoret View original picture , opens in new tab/window

“Luleå University of Technology has every opportunity to be a forerunner and lead, by example in the green transition and widening representation. Universities have an important role in democracy, by educating, researching and disseminating facts and science.This is also how our society develops. I am proud that Luleå University of Technology has always been good at making its results visible and sharing new knowledge.”

As a five-year-old, Eva Nordmark moved to Porsöberget, just under a kilometer from the university campus in Luleå. When she got a little older, her mother worked as a janitor at the university, and she herself worked one summer in her teens as gardener there. The physical environment was thus not alien to Eva Nordmark. In contrast, the university as an educational institution was terra incognita.

“No one in my family had a university education, so it was not obvious for me to study further. In Swedish Social Democratic Youth League (SSU), I made friends who studied at the university. Through them, that world was de-dramatized for me.”

The politically engaged Eva Nordmark decided to study political science. Although SSU was a political school in itself and although there is room for different opinions in a youth association, the studies in political science added a new dimension to her political development.

“At the university, I met students with different political views than mine. It gave me a deeper understanding of different ideologies. We had a lot of fun together, we learned a lot from each other and I made friends who have followed me through life.”

During the years 1995-2000, Eva Nordmark was a member of what was still called Luleå University College of Technology's board. An important part of the board's work dealt with the going from university college to university.

“I remember how proud we were to represent a relatively young higher education institution in strong growth that dared to think outside the box. It was time for us to take the next step in development and become a university.”

“I have my heart in Luleå University of Technology, so it felt natural for me to accept the honorable assignment as chairman. It was a privilege to lead a group of people with so many different skills.”

In 2019, she was appointed minister of employment with Stefan Löfven as prime minister, a task she continued to be trusted with under Magdalena Andersson. In that role, equality and the establishment of newly arrived immigrants were her responsibilites. According to Eva Nordmark, levelling social recruitment imbalance to higher education, regardless of the cause, is important both for justice and social economic reasons. The ongoing transition to fossil-free production in Norr- and Västerbotten brings with it an enormous demand for educated labour, not only for the new industries, but also for the service sector, which is necessary for the region to be attractive to live and work in.

“Luleå University of Technology is an international window to the outside world. It is a knowledge hub in the middle of the green transition. We can show the world that climate ambitions are not in conflict with jobs, on the contrary they are prerequisites for each other.”

She highlights the various fast tracks as a way to make use of foreign competence that comes to Sweden. An equal labour market is also necessary to meet the needs of the labour market. Eva Nordmark thinks that the new companies in the green industry work actively to create workplaces that attract both men and women. But the gender-segregated labour market persists. The gap between foreign-born women and the rest of the workforce is particularly large.

Equality – not just a women's issue

Eva Nordmark emphasizes that gender equality is not just a women's issue. During her time as chairman of the university board, she was struck by how big the difference was between the proportion of women and men who went on to higher education in certain locations in Norr- and Västerbotten. Eva Nordmark hopes that the new adjustment study support, which came into force on 1 October 2022 and is part of a major reform of Swedish labour law can contribute to more people of working age continuing their studies. The transition study support means that anyone who has turned 27 and has worked for at least eight years is entitled to a grant for studies for up to one year.

“I believe in lifelong learning. If you are a 43-year-old mechanic with back ache due to your work,  both you and society will benefit from giving you an opportunity to retrain as a high school teacher.”

Eva Nordmark feels honoured that her lifelong and warm relationship with Luleå University of Technology is now crowned with her being appointed alumnus of the year.

“Luleå University of Technology has every opportunity to be a forerunner and lead by example, in the green transition and widening representation. Universities have an important role in democracy, by educating, researching and disseminating facts and science.This is also how our society develops. I am proud that Luleå University of Technology has always been good at making its results visible and sharing new knowledge", she says.