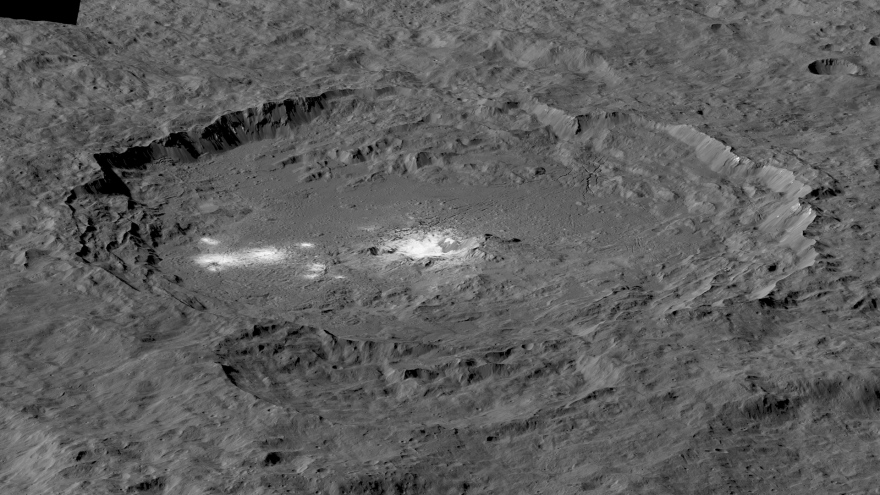 The project is led by Axel Hagermann and Stefan Schröder of the Division of Space Technology on Space Campus Kiruna. They have brought together an international group of over 80 scientists who will collaborate on the CALICO project. Huge quantities of salt has been found on the planet which is one of many things the researchers will analyse.

What makes salt on Ceres so interesting?

Ceres is classified as an ocean world, a type of solar system body where large quantities of liquid water exist or have existed in the past. Recently the scientific interest in these ocean worlds had increased as the conditions in these bodies could be, or have been, supportive of life.

– Ceres could once have had the conditions that support life in its interior. There is organic material and an abundance of salts on the surface. This material has likely originated in Ceres’ interior and could therefore tell us something about the chemistry of the early stages of the origin of life in the solar system, Axel Hagermann says.
CALICO aims to land on Ceres in a crater called Occator, where salt-rich deposits indicate that brines recently have erupted onto the surface. There, CALICO will make use of advanced instruments from leading research institutes all over Europe to analyse the chemistry, mineralogy, geology and the physics of the surface material. Furthermore, with the help of the instruments the scientists will also be able to identify signs of aqueous activity and find out whether there are liquids below the surface on Ceres.

– The brines that form the origin of the salts are very interesting because watery subsurface liquids are now seen as one of the most likely candidates for habitability in the outer solar system, Axel Hagermann says.

The M7-mission is part of ESA’s science programme with a budget of 550 million euro per mission. Dozens of proposals were submitted to ESA by researchers all over in Europe earlier this year. CALICO is one of the five missions that ESA has chosen to be studied further. The final candidate will be formally announced by ESA in 2029, with a possible launch taking place 2036 or 2037. If CALICO were to be selected it would take five to seven years to acquire data; that is how long it will take to get to Ceres.

– Currently Luleå University of Technology is leading the study of the space mission. If CALICO were to be selected and the mission was successful, there would be groundbreaking fundamental science potentially revolutionising our understanding of the origin and evolution of the solar system, Earth and life and Luleå University of Technology would be at the centre of this discovery, Axel Hagermann says.

The CALICO consortium currently consists of more than 80 researchers from institutions in Europe, Japan and even New Zealand. Instrument contributions were proposed by institutes from Belgium, France, Germany, Italy, Sweden and the UK. The proposal study was also supported by aerospace companies in Germany and Poland, with the tech company OHB Bremen providing the conceptual architecture that is critical for this type of mission.

The CALICO prestudy was developed by researchers Axel Hagermann and Stefanus Schröder, in Atmospheric Science, in collaboration with René Laufer and Harish Rao Ramavaram, researchers in Onboard space systems at Luleå University of Technology.