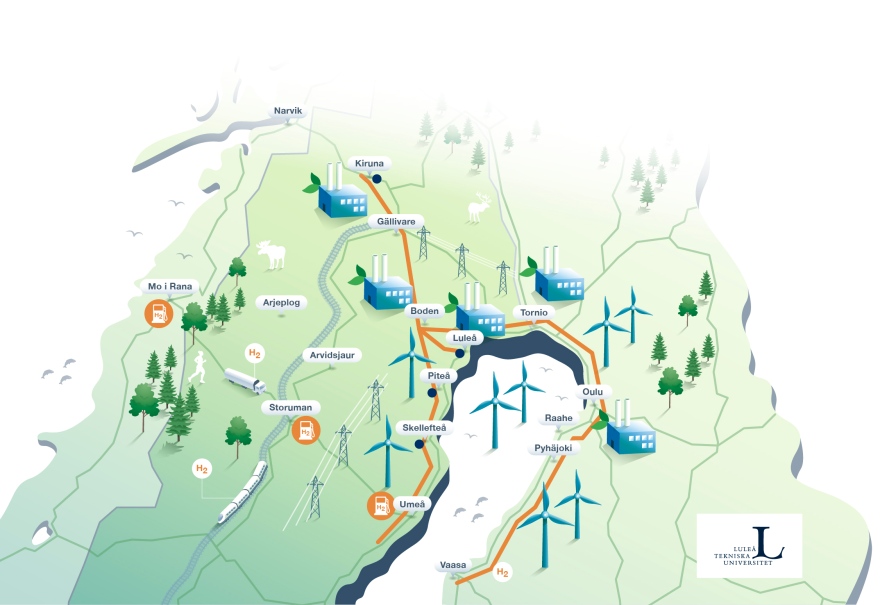 Illustration of hydrogen as part of the energy system in northern Sweden. View original picture , opens in new tab/window

More research, development and education, as well as coordination, are also important to accelerate the implementation of hydrogen.

"Our prestudy assumes that there are great advantages to hydrogen pipelines when transporting large amounts of energy. Regardless of whether hydrogen will be produced very close to an industry, or close to the electricity production, hydrogen pipelines will be needed. The hydrogen pipelines that are placed below the ground surface can be built by individual actors and the hydrogen is sold bilaterally. Or larger infrastructure can be built for the transport and storage of hydrogen that is used jointly, something that opens up a new hydrogen market", Cecilia Wallmark says, Director of Centre for Hydrogen Energy Systems Sweden, at Luleå University of Technology.

The prestudy has been carried out by Luleå University of Technology and RISE in 2022 in collaboration with 24 actors with interests in hydrogen in northern Sweden, and has been partially financed by Vinnova.

A key to achieving the climate goals

Hydrogen has been identified by the EU as a key to achie the climate goals by 2050. The Swedish Energy Agency suggested to the government a national strategy for hydrogen, based on the value chain of the fossil-free initiatives made by the mining and steel industry. Hydrogen has been used by industry for over a hundred years and there are today a number of short hydrogen pipelines in Sweden, for example in Sandviken and Stenungsund. Elsewhere in the world, long pipeline systems are in full operation for transporting hydrogen. The large-scale introduction of production, distribution, storage and use of renewable hydrogen in the mining and steel industry that is planned in northern Sweden is, today outstanding, even globally.

The arctic climate is a challenge

Not least the arctic climate poses challenges for the new infrastructure with hydrogen pipelines. Complementary research and development is essential. These include, among other things, technical questions about new materials to minimize leakage in hydrogen pipelines in cold climates, planning support for the best location of hydrogen pipelines, but also about how the regulatory framework should be developed. More analyzes are needed to increase understanding of the completely new energy system that may emerge in northern Sweden and Finland, where hydrogen pipelines will probably become a central part. The prestudy also suggests to coordinate education about hydrogen and to launch a special research program about hydrogen pipelines and hydrogen's possible complement to the electricity grid.

This project has shown that the investment for hydrogen infrastructure with hydrogen pipelines or power lines involves relatively low costs compared to the investments needed in process technology and for the production of the gas itself, despite potentially very large investments and constructions for infrastructure. A new type of infrastructure is emerging that lacks appropriate regulations for ownership and governance. Today, there are large gaps in legislation when it comes to building a hydrogen infrastructure in Sweden. In order to reduce the uncertainty of investing and facilitate development, the preliminary investigation recommends a more thorough investigation and development of the legislation surrounding the hydrogen system and that Sweden adopt a national strategy for hydrogen, based on the Swedish Energy Agency's proposal.

"When a combined hydrogen and power network is created, it will also lead to a new business situation and completely new business opportunities, not least for municipalities and companies along the hydrogen pipeline in northern Sweden. Therefore, further research aimed at developing an efficient hydrogen market is needed", Johan Sandstedt says, business developer and focus area leader, Industrial transition at the research institute RISE.