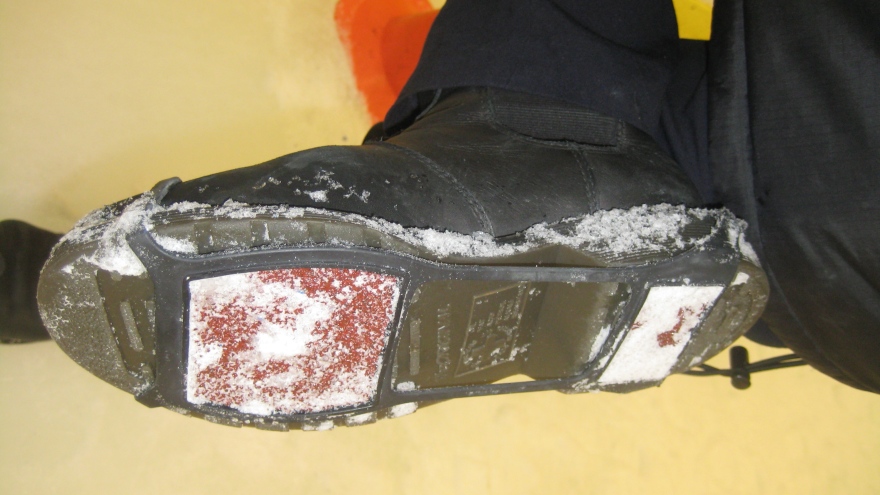 Technical tests only, are not enough to develop the Swedish standard for winter shoes and slip resistance.

- Unlike normal standards, we need to have with real people when we test winter shoes and slip, says Glenn Berggård, researchers in Traffic Engineering at Luleå University of Technology.

In Sweden every year some 10 000 men and 15 000 women are forced to seek medical care because of injuries from falls on snow and ice. Persons injured in falls on snow and ice get more severe injuries and longer convalescence compared with pedestrians falling on bare ground. The societal costs of falls on snow and ice is at least twice as great as the cost of winter maintenance. Transport Administration would therefore identify the methods and tools that can prevent falls in winter and make it possible to walk safely all year round.

Winter 2014/2015, a interdisciplinary study was made by researchers at Luleå University of Technology, to obtain knowledge on how future standardized tests should be designed. The major conclusion of these tests, which are now established, is that the researchers believe that physical tests by people should be part of tests of winter shoes and slip, as a way to produce a Swedish standard. Technical investigations of shoes and slip in terms of materials, friction, and function in relation to the winter surface and the temperature is not enough. People are after all walking with their shoes on.

The subjects' reviews of properties are, according to the Luleåreserachers, the most important knowledge today of what is good or bad with winter shoes and slip and should be included in a standard.

- In order to still be able to measure  what the subjects can relate to only as an experience, we would like to, for example, try to perform non-slip tests, as we attach an accelerometer on foot and hip on our subjects. Then you can measure how big speed change is, ie how well a person can parry when he or she slips on different surfaces with different shoes and slip resistance.

When you slip, the foot continues where it would actually stop. The ability to slide when you fall, decreases the older you and therefore the importance of good winter shoes and slip resistance, is increasing.