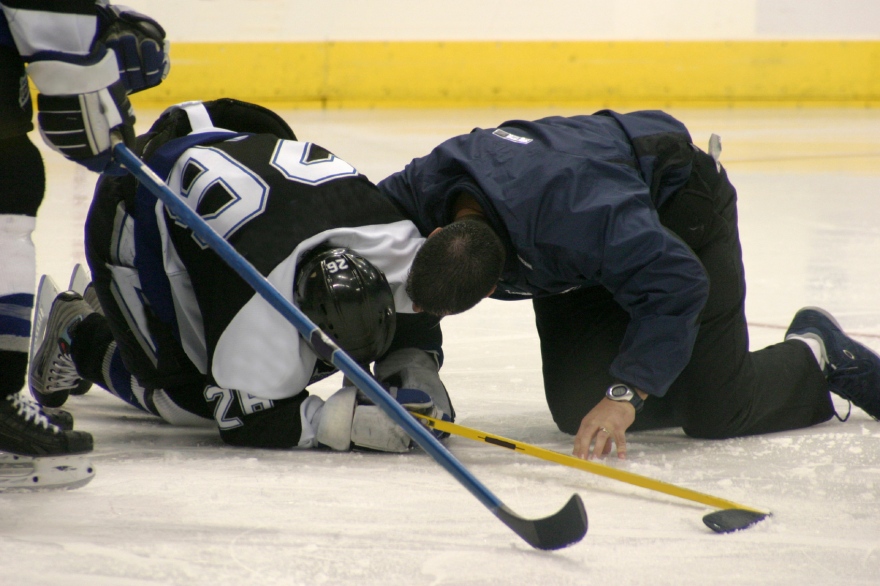 A new study from Luleå University of Technology shows a large increase of the number of concussions among elite ice hockey players. View original picture , opens in new tab/window

- You must do everything you can to reduce concussions in ice hockey. Today we have 40 players in Sweden who we know have stopped hockey, because of the aftereffects of concussions, says Yelverton Tegner.

Yelverton Tegner, one of the nation's foremost experts on concussions, now with two researchers at Luleå University of Technology, will make a survey of Swedish ice hockey players, who quit because of concussions. Several of the players are drawn with constant headaches and difficulties in concentrating. They are sound and light sensitive, have hearing loss and depression. Many are left with lifelong problems.

- We have a 15 year old player who had to quit because of the suites from concussions in hockey. He goes with constant headaches, difficulties in concentrating, and difficulty coping with the school. Then it is not funny anymore, says Yelverton Tegner.

Furthermore, Yelverton Tegner, in collaboration with researchers from the University Hospital in Uppsala, will make inquiries with the so-called PET camera of individuals with lengthy complaints after concussions. PET is an examination that allows you using radiolabeled drugs and can create three-dimensional images of the brain, in order to better assess various diseases.

He has for years researched concussions among ice hockey players in Sweden. The past forty years he has been Luleå Hockey physician. He feels that the number of players finishing hockey because of their brain injuries has increased markedly in recent years in Sweden and he has seen moments on the ice where the damage is greatest. A serious torque is obviously a challenge, aimed directly against the head, another when two players standing and grubs in the frame and one other player comes in and tackles.

- But the most severe concussions for players, are usually when a player is standing still and not see onother player coming tackleing. During an unprepared tackle in hand, the body makes its own rotation and father aside. Head come next, and then there will be a strong rotation in the brain, says Yelverton Tegner.

Yelverton Tegner believes that the tackles in hockey had earlier the purpose, to stop a player.

Yelverton Tegner, says, that players are paid to play hockey. If they are shut down following a decision of the disciplinary committee, because of the foul, he does not understand why the salary is paid during that time. The latter is a model that is practiced in the NHL. He says, there unfair, dangerous game, is not just a impact for the team, but also a direct economic impact, that is felt for the unfair player's wallet.