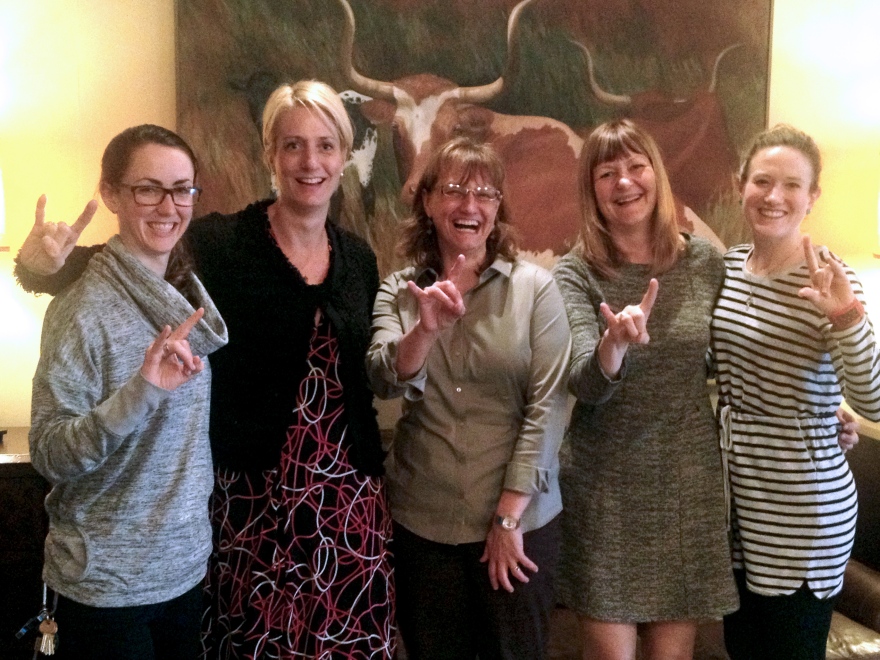 Professor Darla Castelli (center), at the University of Texas at Austin, welcomed Anna-Karin Lindqvist and Catrine Kostenius (on each side of Castelli). Here, together with two of Professor Castelli's doctoral students (outer left and right).

– We were welcomed with open arms. My feeling is that we value each other's knowledge and experiences, which is a good start for a productive collaboration, says Catrine Kostenius, Assistant Professor of Health Science at Luleå University of Technology.

In March, Catrine Kostenius and Anna-Karin Lindqvist, a doctoral student in physiotherapy, visited Austin, Texas, to present their own research and recent research from the Health Promotion Group at the Department of Health Sciences. They also met researchers, learned more about recent research at University of Texas at Austin and visited their well-equipped laboratories.

– We focus on health and enabling ICT in our research projects and they have other fascinating experiences so in collaboration between these two research groups we could complement and enrich each other. It feels like a real win-win situation, says Catrine Kostenius.

Empowerment as a tool

The research team Catrine Kostenius and Anna-Karin Lindqvist visited is producing world-leading research in the area of physical activity and cognitive ability. The studies they performed in their well-equipped laboratories have increased knowledge about the positive link between physical activity and learning. The research conducted by the Health Promotion Group at Luleå University of Technology emphasize empowerment as a basis, that is, giving voice to the participants and invite them to actively participate throughout the research process.

– The researchers at the University of Texas at Austin have well-equipped laboratories and conduct research on how the body and brain are effected by physical activity, and we have experiences of the practical use of ICT to promote health. In my dissertation project, students were involved in the creation and implementation of a health promoting intervention in school with the help of mobile phones, says Anna-Karin Lindqvist, who is planning an upcoming post-doc at the University of Texas, Austin.

Darla Castelli, assistant professor at the Department of Kinesiology and Health Education at the University of Texas at Austin, has received the prestigious assignment  of evaluating the nation wide project Let's Move.  The president’s wife Michelle Obama initiated the project to improve children's health through increased physical activity. Some challenges has surfaced in the implementation of this large scale project as is to be expected according to Darla Castelli who also suggests that one of the many opportunities for improvement may be an approach based on empowerment, where the schoolchildren are involved in the implementation of the project.

– The Health Promotion Group here at Luleå University of Technology frequently explore and discuss empowerment-based approaches, the advantages and challenges, and we are more than happy to share our experiences in this field, says Catrine Kostenius.

Enabling ICT is a highly prioritized research area at Luleå University of Technology. The first contact with Darla Castelli was made during a visit earlier this year by Vice–Chancellor Birgitta Bergvall-Kåreborn, which paved the way for this new collaboration. Financial support from the Group for Enabling ICT also made the trip to Austin, Texas, possible.

– The cities of Luleå and Austin have previously found connections. Luleå was placed on the world map when Facebook was established here and Austin is well known for the South By Southwest a set of film, interactive, and music festivals and conferences that take place every year in mid-March. In these contexts contacts have been made between the cities and it feels great that the research groups at both universities now also connected, says Anna-Karin Lindqvist.