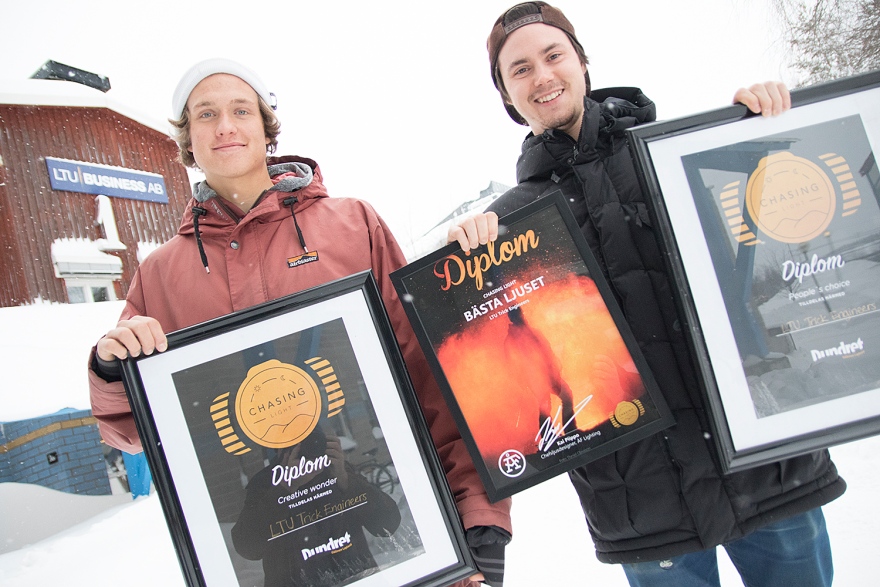 - It was very inspiring to work with light. It gives a lot of inspiration to me regarding lighting to my studies in engineering design, says Carl Hansol.

- We had three days to create the film. We designed a concept that was about a skier who hunts and captures the "light" which then lights up the whole Dundret said Carl Hansol.

The inspiration for this year's edition of Chasing Light-race emerged during coaching conversations with lighting designer Kai Piippo in the development Illuminate Swedish Lapland LTU Business ABresulted in the fall of 2014. The result was a spin on Dundrets existing competition Chasing Light - where lighting this year got a completely different price category.

- Evening scenes are more difficult since it requires a lot of light to create a soothing atmosphere. We got into it in the end, especially in backlit scene that was filmed in red light. It was probably the way of thinking that made ​​us won the light category, says student and the entrant Stefan Lindstedt.

The contest Chasing the Light is a special weekend in January when lighting designers, students and skiers gather to experiment with to illuminate the mountain.

- Highlight Swedish Lapland was the inspiration for many unique ideas. Along with lighting designer Kai Piippo, we developed concepts utter that gave life to the snow and the mountain in entirely new ways, says Tommy Niva, president of Dundret.