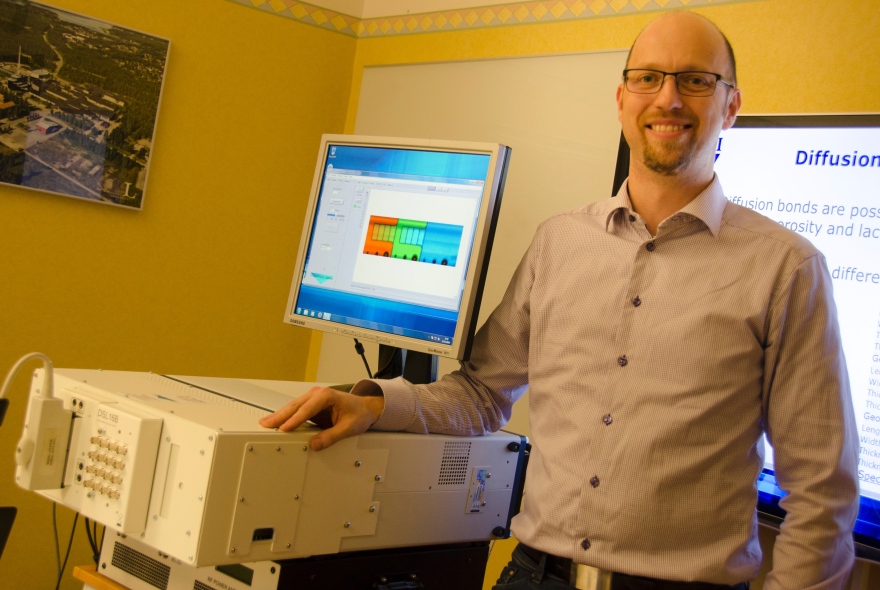 Johan Carlson, Professor in Signal Processing at Luleå University of Technology, next to the ultrasound scanner that will enable new research in the aread of diffusion bonding. Photo: Linda Alfredsson

It is the project BondTest and money from the University's lab fund that enabled the purchase of an ultrasound scanner. The project started in February this year, will last for two years and Luleå University of Technology has nearly four million kronor of the total project funding. During the project, researchers will develop the technology to use ultrasound in the investigation of the so-called diffusion bonding.

Diffusion bonding, ie, two separate metals being joined molecularly by compressed under high pressure and high temperature for a long time, is mainly used in complex mechanical structures that are difficult to weld and when there are high demands on strength. Already, ultrasound is used when testing such structures and laminates, but that requires a relatively thick sample of material.

– There are mainly two problem areas when conventional ultrasound is used to test the strength: when the layers are thin and when dealing with different materials in different layers. The challenge is therefore to assess the durability of thin materials and structures, says Johan Carlson. 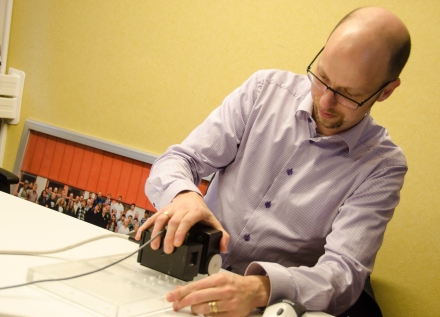 By using a probe, a three dimensional image of the material is generated. The flexibility of the equipment will provide the opportunity to study problems that were previously not possible.

An alternative to ultrasound is to use a random sampling method. Basically, a material is simply taken apart in order to find out how well it holds.

– The key is non-destructive testing and that is where the ultrasound enters the picture. Ultrasound is also harmless to the operator, relatively cheap and the equipment is portable. Hopefully it will also be possible to inspect components in operation.

By using a probe, an ultrasonic sensor that consists of between 64 and 128 sensor elements, a three-dimensional image of the material under investigation is created. A combination of physical modeling, and advanced signal processing methods will result in that even thin material structures can be examined by canceling the reflections that occur because of the materials structure. In this way, defects will appear.

– What is unique is that the ultrasound scanner works as a research platform. We can rebuild it and reprogram it. For example, we work with imaging algorithms to detect and characterize various defects that may occur, says Johan Carlson.

– The flexibility of the equipment allows us to study problems and application areas that were previously not possible.

In addition Luleå University of Technology, also Diagnostic Sonar, I-Deal Technologies, EWF, Rubico, and TWI participates in the project BondTest. The project is funded by the EU Seventh Framework Programme.