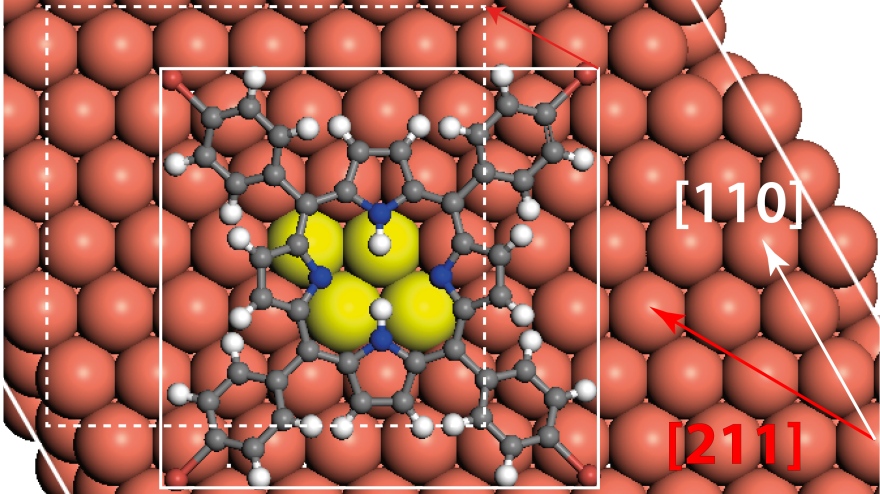 Copper atoms on the surface in orange, with four atoms marked in yellow, shows how the molecule is manipulated along the surface of the simulations. The molecule's atoms are shown with gray spheres of carbon, blue for nitrogen and white for hydrogen, and red for bromine. The white squares denotes the square shape of the molecule before and after the manipulation, in this case. View original picture , opens in new tab/window

– Materials of the future, like flexible, wearable electronics and organic electronics, will define the way we live and interact with the world. Organic molecules, made out of carbon and hydrogen, lie at the heart of these developments. Molecular materials have already had an impact on technology through, for example liquid crystals in displays for clocks and other portable electronics, and could further be used for cheaper and better technology for flat screens and solar cells, says Andreas Larsson, chair professor in Applied Physics at Luleå University of Technology.

– Molecular materials are going to provide us with lighter, thinner, cheaper, stronger and more powerful products. The development of computers is approaching a time where the devices are comparable to the size of molecules, which has led to the advent of the term molecular electronics. Here single molecules are envisaged as single molecule transistors and single molecule memory cells, says Andreas Larsson.

Important interface between molecule and metal

The latest methods within experimental and applied physics were used to pave new way for molecular materials. The researchers have studied the behavior of individual molecules on a copper surface, and have for the first time been able to manipulate a larger organic molecule with atomic precision and understanding. The research on molecular materials differ from traditional materials research in that the interface between the molecules and other materials become extremely important for the elucidation of future applications.

– For molecular materials it is important to understand how it interacts with its neighboring materials, usually metals, where electrons are transferred, and how the molecules and the metal changes due to the interaction.

– When repeating the molecular manipulations in quantum mechanical computer simulations we were able to explain the observations. In this particular case the interaction is governed by the copper metal surface's pliable electronic structure that has the ability to adapt to the surface bound molecule, in combination with the molecules’ flexibility to adjust the shape in order for its atoms to interact favorably with the underlying copper atoms, says Andreas Larsson.

The article in other media