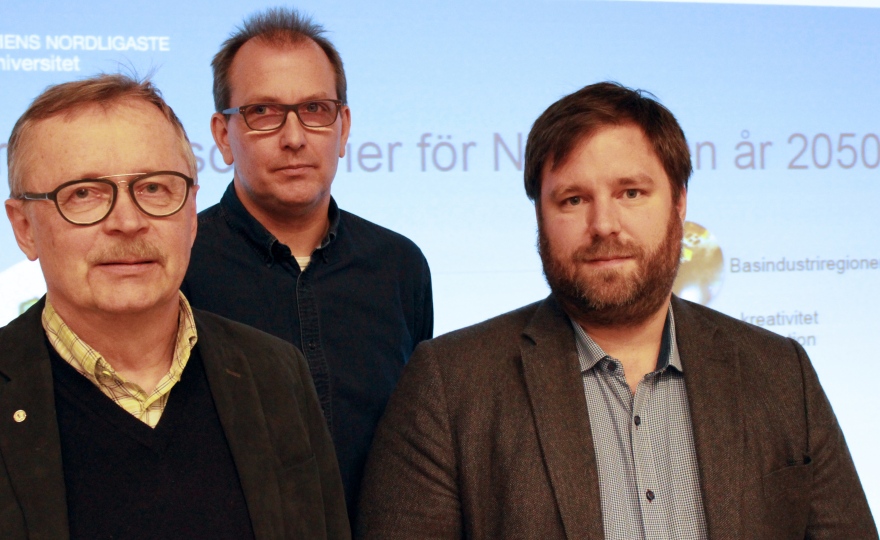 - But actually we are more interested to hear what you in the audience think about the future development in Norrbotten, said Håkan Ylinenpää, Professor of Entrepreneurship and Innovation at Luleå University of Technology.

Recently the research quartet gave a presentation of the different scenarios to an audience at Luleå University of Technology. The idea during their tour of the future in Norrbotten, at various authorities, is to launch discussions about the issues that the four researchers have grappled with and that have resulted in a total of six reports. The latest report is perhaps the one that attracts the most to reading. It presents five imaginative scenarios of how development in Norrbotten could unfold. The researchers have come up with these scenarios based on their scientific disciplines and by analyzing issues affecting Norrbotten in 2020 and 2050, for example, which forces and counter-forces will assert themselves in Norrbotten? What are the challenges that the region will face? What opportunities have regional decision-makers to affect the future?

- The university's role will for example be very different, depending on which scenario will emerge, said Håkan Ylinenpää.

On tour in Norrbotten

In the meta-analysis the researchers' five previous reports are woven together and analyzed and in this way the different scenarios emerged. Based on these results and the report, the question is compiled and discussed around the county, whether Norrbotten does the right priorities, or if something should get change. The goal is to obtain a common knowledge in Norrbotten of opportunities in relation to the county's growth prospects.

- We don´t know of course what Norrbotten will look like in 35 years from now but we can describe possible scenarios of how it could look. Some of these scenarios are to some extent a reality already today, says Patrik Söderholm, Professor of Economics at Luleå University of Technology.

The five scenarios include, the Base Industry Region (based on a traditional approach to regional development where the population increases in the areas where industry chooses to locate), Knowledge, creativity and communication as a driver of regional development (i.e., obs are created in the municipalities where people choose to live), change in global climate with new opportunities (based on the assumption of Northern Europe as a prospering region because of our colder climate), Smart specialization based on related variation (the dependence on base industry is complemented by activities linked to the region's traditional industries and skills) and finally diversification according to a national average model (an industry structure that mimics Sweden as a whole, that is, no special regional character).

For each of these scenarios, an analysis has been along a number of dimensions such as the business structure, investment needs, education and skills requirements, norms and attitudes and, finally, the importance and the forms of political intervention.

Funded by the university and County Administrative Board

The report of the scenarios as well as the other five reports are based on the Regional Development Strategy (RUS) for future sustainability in Norrbotten 2020 and Norrbotten Innovation Strategy (RIS). Funders are Luleå University of Technology and the County Administrative Board county grants. The other two participating researchers from Luleå University of Technology are, Thomas Ejdemo, Research Engineer in Economics and Daniel Örtqvist, Professor of Entrepreneurship and Innovation.

Read more about the vision of the future in Norrbotten