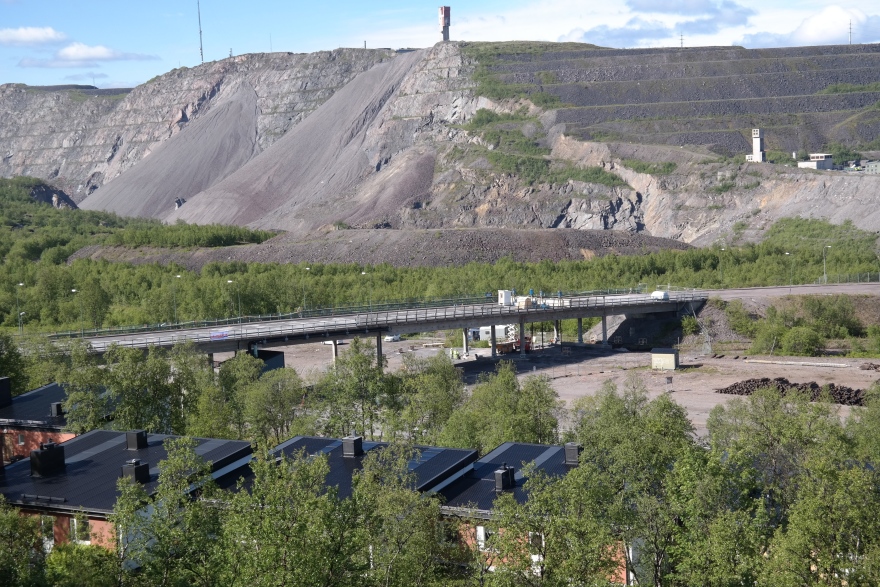 The 120-meter-long prestressed concrete bridge along the mining road in Kiruna tested by researchers at Luleå University of Technology on Thursday. View original picture , opens in new tab/window

- The tests were extremely successful when two bronze three beams loaded to fracture with a load of about 5.5 - 6 Mega Newtons per beam, corresponding to 550 to 600 tons, which means that the bridge can handle more than the preliminary estimates we made before the test, says Thomas Blanksvärd researchers at Luleå University of Technology.

The bridge that on Thursday charged until the burst is a 55 year old viaduct along the mining road from Kiruna city hall over the road E 10 to LKAB. It is a 120 m long prestressed concrete bridge in five spans.

The test, which also Swedish Construction Industry Development were partners, is to develop methods and models that can describe the behavior of prestressed bridge structures. On this basis, one should be able to predict the service life of bridges. The demands on today's road and rail infrastructure is increasing and will continue to increase. The needs will be greater traffic volumes, higher speeds, heavier axle loads, reducing costs while maintaining safety.

- As we use our existing infrastructure harder and more efficiently, it is important that safety is maintained or increased, which is why the experiment, says Anders Carolin, Transport Administration.

The measurement program in the bridgetest covers some 100 sensors placed at strategic positions in order to measure how the bridge behaves with and without load. They also do a vibration analysis without load to produce bronze natural fluctuations. Using models developed by the University do then a new measurement to detect a damage incurred.

- It remains considerable work to evaluate the results from all the sensors and evaluate, update and develop methods and models that can describe the behavior of similar prestressed bridge structures located in the country, says the university's researchers Thomas Blanksvärd.