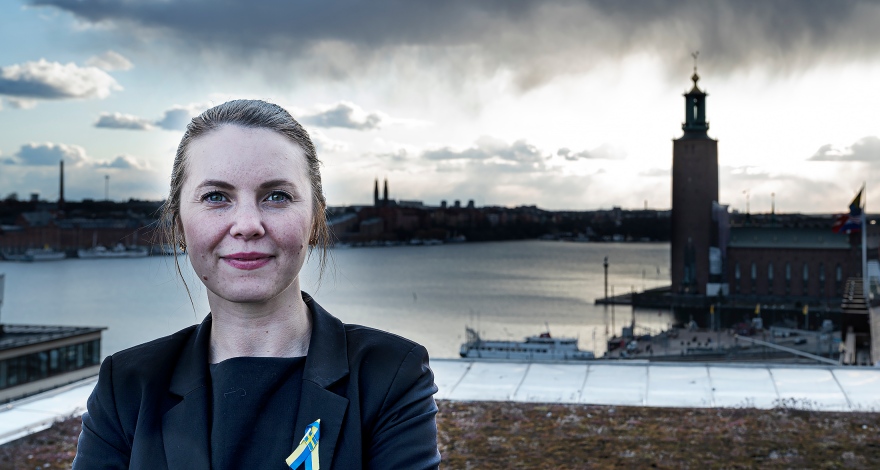 “It is fantastic that Luleå University of Technology is so closely linked to business, basic industries and natural resource management in the region." Photo: Staffan Westerlund View original picture , opens in new tab/window

As Minister of Public Administration, Ida Karkiainen is responsible for the government's cooperation with Sweden´s municipalities and regions. She was recruited for this assignment through her position as a non-political official in the Norrbotten Region. In that role, she had close contacts with Luleå University of Technology.

“Luleå University of Technology was a natural partner in various projects that dealt with regional development. Our universities throughout the country are important because they give people the oppurtunity of education and they are also important because they supply society with a skilled labour force. The opportunity to study in Sweden probably contributes to Sweden being ranked as the second best in the world in terms of innovation by the UN intellectual property organization WIPO.

Luleå University of Technology occupies a somewhat special position among Sweden's higher education institutions in terms of its significance for regional development.

“It is fantastic that Luleå University of Technology is so closely linked to business, basic industries and natural resource management in the region. It was also emphasized in the latest government bill for research that the university is good at this. At the same time, the freedom of research from external influences is important. Freedom is a prerequisite for research to be able to solve current societal challenges.”

Ida Karkiainen has always been interested in societal issues. But the her commitment to a political party came late. Her political school was the student council during school time in Haparanda and later Haparanda's youth council, a non-partisan organization working for young people's participation in the municipality.

Political science – at a technical university

In high school, Ida Karkiainen attended the science program. But it was social issues rather than science that attracted her when she began to look at the range of higher education programs. To her great joy and surprise, it was possible to study political science at Luleå University of Technology – joy because Luleå is relatively close to her hometown of Haparanda and surprise because she did not think that a technical university offered social science educations.

“It was a broad education on issues that interested me. Many of my teachers in high school thought that I should apply for an education at the classical universities in Lund or Uppsala, but I had no desire to move.”

She ponders on why the teachers thought she should go to the old and venerable Unviersity towns. She believes that it has to do with the Norrbotten self - image. Moving from Norrbotten as a young person was perceived by many as a sign of success and to remain a proof of the opposite. The people of Norrbotten have not yet got used to the fact that the county is now one of Sweden's most dynamic regions in the forefront of the green transition. The region's university is a strong contributing force in that process.

Ida Karkiainen herself has been faithful to Norrbotten and Happis, both as a student and Minister of Public Administration. She commutes between Haparanda, where she lives with her partner and two children, and the office at the Ministry of Finance in Stockholm. During her studies, she commuted between Haparanda – where she worked extra at the supermarket ICA and worked as a youth leader at Ungdomens hus – and the university in Luleå. It was now that she, after muvh consideration, decided to become a Social Democrat.

“I had studied for two years before I became a member. By then I had read political history and theory. We had studied the ideologies of the different parties and only then did I feel that I could make a choice that I could stand for.”

She is very pleased that she chose to study political science at Luleå University of Technology and she often goes back to the course literature to find perspectives on various issues that end up on her desk in the assignment as Minister of Public Administration. The programme had a strong focus on natural resource management. As a student, Ida Karkiainen was more interested in democracy issues.

“But now afterwards I have gained a huge interest in natural resource management. It is about conflicts of interest and how we manage our common resources, says Ida Karkiainen.”