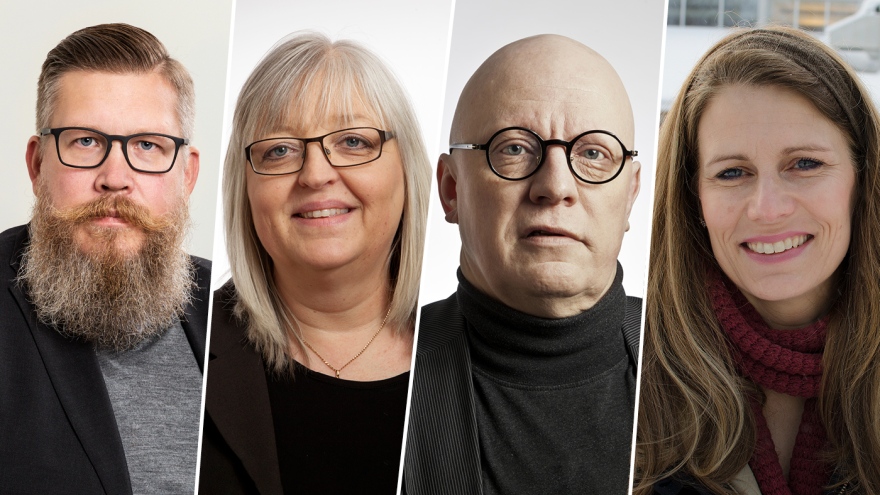 A highly topical issue discussed by the panel was the role of scientists in the debate in the media during the corona pandemic.

– I think there are two professional groups that need a little self-examination during the corona pandemic, they are scientists and journalists. I wish I had heard more scientists who more often replied, "I do not know." Journalists, on the other hand, tend to have their favorite scientists who are allowed to comment on everything, even if it is not their own research subject. So I think there is huge potential for improvement among both scientists and journalists, Pär Weihed says, Pro Vice-Chancellor at Luleå University of Technology and Professor of Ore Geology.

Current problem in the world

False news, misinformation or "fake news" is a problem all over the world today and poses a threat to modern democracy. Incorrect information that is intentionally disseminated by well-organized actors who act for their own gain, can spread very quickly via social media with devastating consequences. Is technology the solution to dealing with fake news or is it part of the problem? What is the significance of education in counteracting the effects of false news in a democracy? How do we best train for critical thinking in school? And what about our researchers, is that what they always say to trust? These were some of the issues discussed by the researchers in the panel.

Fake news - a phenomenon with many faces

Just defining fake news is a challenge and sometimes the term is deliberately used to tarnish opponents in a political debate.

– Fake news is a term used on everything from deliberate misinformation to destabilize a situation, to a simplified, biased reporting, where you may only show one side of the coin. Fake news has also become a rhetorical concept that political opponents stick to each other when they do not agree with a perception of reality. And where is the line between political messages, where you try to win public opinion by highlighting your perspective, and conscious manipulation of the news flow? Simon Matti said, Professor of Political Science at Luleå University of Technology.

In social media, fake news can spread very quickly and some research shows that they even spread faster than "true news".

– Anyone can create a news item on social media, post it and claim that the news item has a truth value. A study at MIT, Massachusetts Institute of Technology, shows that fake news spreads six times faster than true news, without the help of technical aids such as bots. It is we humans who spread the false news faster than the true stories, and then of course the question is, why? Then we have technical digital innovations, such as deepfake, which means that we have the opportunity to manipulate both sound and image to spread fake news, Anna Ståhlbröst said, Professor of Information Systems at Luleå University of Technology.

The researchers debated on not scientific grounds during covid-19

– It is completely natural that there are different perceptions and perspectives on an issue. When research has not been successful, it is a matter of setting up hypotheses and theories and testing them, where researchers from different quarters do not see the same thing. But I agree that there is room for self-examination, precisely these self-appointed experts, who are not in the field but feel compelled to appear in the media. I also think the media has been bad at asking follow-up questions. The media has reported figures but not asked why it is this way. There has been no time for in-depth studies, Simon Matti said.

To counteract fake news, the school has an important task when it comes to our democratic values. The Swedish school has both a knowledge mission and a democratic mission which, among other things, is about conveying and anchoring respect for human rights and the basic democratic values on which Swedish society rests.

– In the subject Swedish, fundamental value issues are very important. I usually emphasize fiction as an important source to draw from, because there you have the opportunity to take part in how other people have thought and felt through different times and in different cultures.Then you have the opportunity to meet people you would not otherwise meet; the meeting with the other, Caroline Graeske said, Associate Professor of Swedish and education at Luleå University of Technology.

She said that the school also has an important task when it comes to teaching source criticism, the ability to analyze different types of information.

– It is not an easy task. It is also about daring to meet opinions other than your own in the filter bubble you are in. I strongly believe in dialogue and communication, and that is something the Swedish school should work for, Caroline Graeske said.

Simon Matti emphasized that we should not take democracy in Sweden for granted, even though we generally trust our political institutions and our democracy.

– We know that among younger citizens, for example, there are certain tendencies that the democratic system is not valued as highly. It is not perceived that democracy is as important as other groups in the population. Here it is important to have a continuous dialogue about what democracy is and how democracy works and why democracy is preferable, compared to other forms of government, Simon Matti said.

Finally, Caroline Graeske advised the audience to read the book Främlingsfigurer by Mara Lee as an in-depth study of the charges of language in the construction of the stranger. The panel discussion was led by moderator Lena Callne, journalist and former employee at SR Norrbotten.