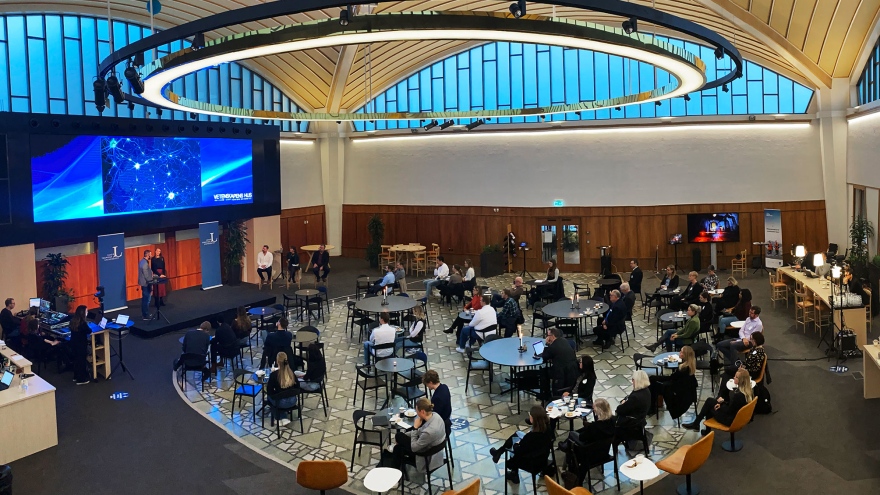 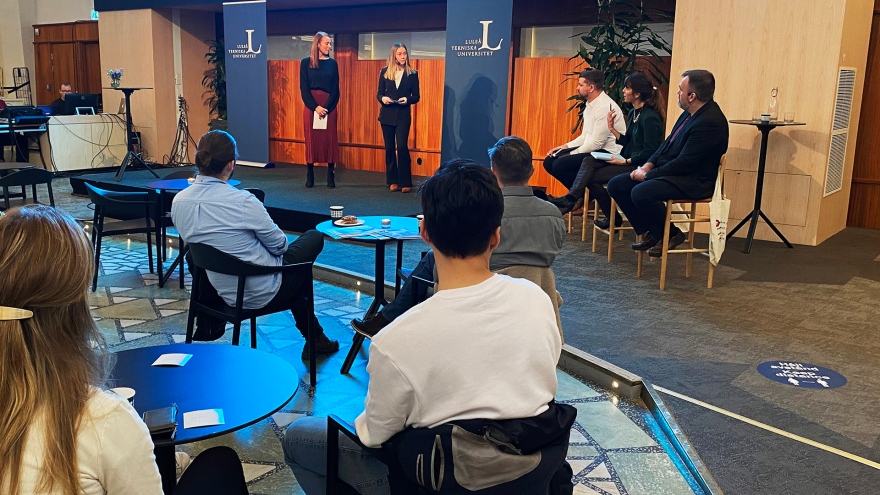 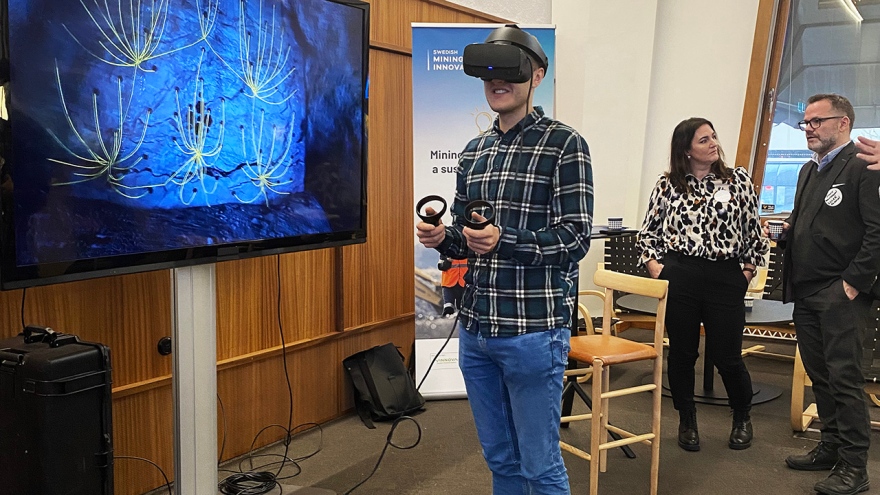 Marita Holst, head of the unit for collaboration and student recruitment, started the day and told about how the university's innovation system has taken great strides in recent years.
- I hope that this day will give you information and inspiration, and lead to new collaborations, she said in her opening speech.

Roland Larsson, responsible for one of Luleå University of Technology's major investments, CREATERNITY, encouraged more people to become engineers.
- The green transition opens up fantastic opportunities for new innovations - save the world and become a rich hero.

The audience voted for student ideas

The day offered sharp idea pitches from students where the audience could digitally vote out which idea they thought had the greatest potential. The winners, who were awarded SEK 10,000 for each idea, were Matilda Öhman, for her idea of a parking disc in app format, and Albin Sämfors and Casper Johansson for her idea of a more sustainable food packaging.

Both the researchers and the students received feedback during the day from a trio of business development kites: Niklas Grönberg at LTU Business, Emma Hansson at Arctic Business Incubator and Per Nilsson at Norrlandsfonden.

Among other things, Niklas Grönberg emphasized the importance of testing his idea early on in order to "fail" and not invest time and resources in an idea that will not work. Emma Hansson agreed that what she is looking for in a good business idea is that there is a market, that the idea is scalable, and not so easy to copy.

Researcher pitches that make a difference

Anna-Carin Larsson, assistant professor of interface chemistry, presented her research which aims to develop a new flame retardant that can be produced with natural and non-toxic substances. The potential is great due to increased legal requirements and as more and more flame retardants that contain harmful ingredients are banned.

Researcher Anna-Karin Lindqvist, assistant professor of physiotherapy, presented another but also important research that deals with how we can make our children become more active in everyday life, above all by getting to school by walking or cycling.

Malin Winsa, CEO of Noah - Local food said that the number of farmers in Norrbotten has decreased from 10,000 to today's 150, at the same time as the demand for locally produced food is increasing. By buying food directly in their app, you support local producers who then get to keep more of the profit margins.

The theme of sustainability and food production continued with Moa Johansson, CEO of Containing Greens. She inspired by telling about their journey that began in LTU Business' summer program, where they would address a societal problem linked to the UN's sustainability goals. The company now uses hydroponic container plantations to grow vegetables and herbs all year round in the Arctic climate, using waste heat from server halls.

From research idea to startup

The day ended with four startups based on research ideas at Luleå University of Technology. One of those who presented was Jens Eliasson, CEO of Thingwave, who told about how he started as a student at Luleå University of Technology in the 90s, then became a researcher and eventually took the courage to quit as a researcher and invest in his company as entrepreneur. A successful company that now develops and delivers sensor technology to the mining industry.

During the breaks in the program, visitors had the opportunity to test a VR environment from Swedish Mining Innovation and thereby experience a virtual visit 1,300 meters underground.

Marita Holst ended the day by encouraging more people to take advantage of the free and confidential innovation support that the university offers all its students, researchers and employees. She also advised companies on the possibility of developing by collaborating with the university's researchers and students.

Do you want to develop with the help of the university?
Check out all the possibilities here