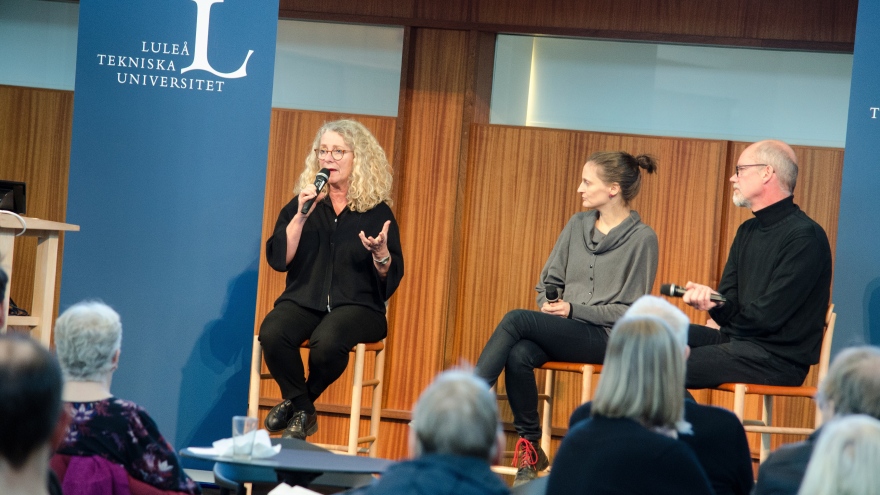 Maja Runeberg (in the middle) is concerned about populist cultural policy. In the talk Marianne Söderberg, cultural journalist and teacher at Luleå University of Technology, Maja Runeberg, actor and Artistic Director of Lule Stassteater, as well as Ricky Sandberg, cultural worker and former Art Director at Havremagasinet participated. They agreed on that there is a strong link between democracy and culture, and expressed the importance of the need for cultural freedom, especially in a time of increased polarization in society.

Only 65 per cent ​​of Sweden's regional culture politicians believe that the principle of arm's length distance from controlling the culture is absolute. It shows in a survey made by SVT. 35 per cent are more insecure or opposed to politicians not being able to stop public funded culture. Maja Runeberg said that the zeitgeist is always reflected in art, so there are no need to control it. She also lifted examples where Swedish local politicians have wanted to stop plays at theatres because of the content.

–  It's horrible that it happens during the 2010's. We also see it when we look at Europe, like in Poland and Hungary, she said.

During his time at the Havremagasinet, Ricky Sandberg focused on culture as a tool in the democratic process.

–  The link between art and audience where we get an interaction must be strengthened and here culture policy in Norrbotten needs to be improved.

Marianne Söderberg pointed out that the culture must be open, but not controlled.

– When the thumbscrews are drawn around the freedom of expression, it leads to consequences for those in the cultural sector. The artist must be free to express and investigate, but theaters, art galleries and other venues obviously have a responsibility to make the culture available.