Ayanne De Oliveira Maciel, Ulrika Rova and Io Antonopoulou, who are all researchers in Biochemical Process Engineering at Luleå University of Technology, capture carbon dioxide together with SunPine. 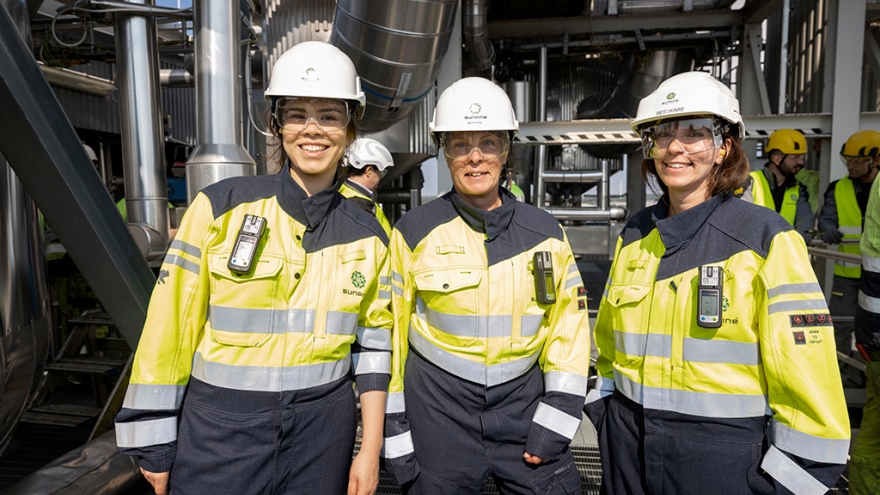 Carbon dioxide is captured at SunPine in Piteå in northern Sweden. 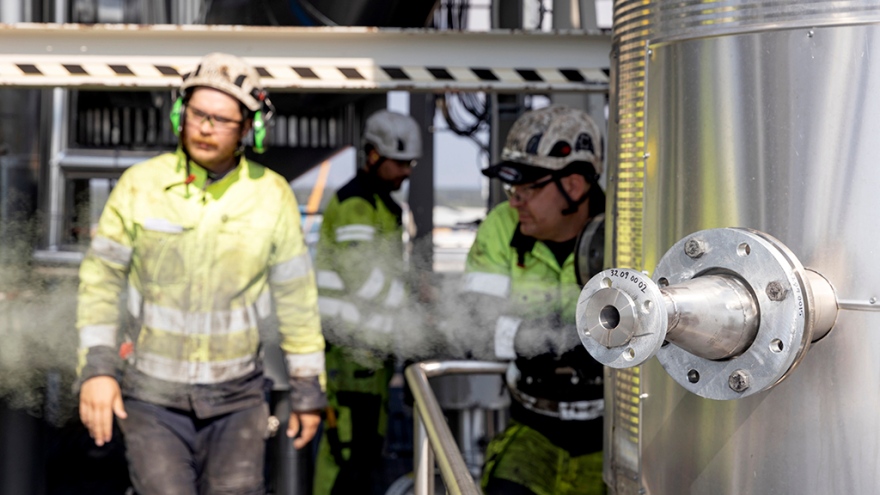 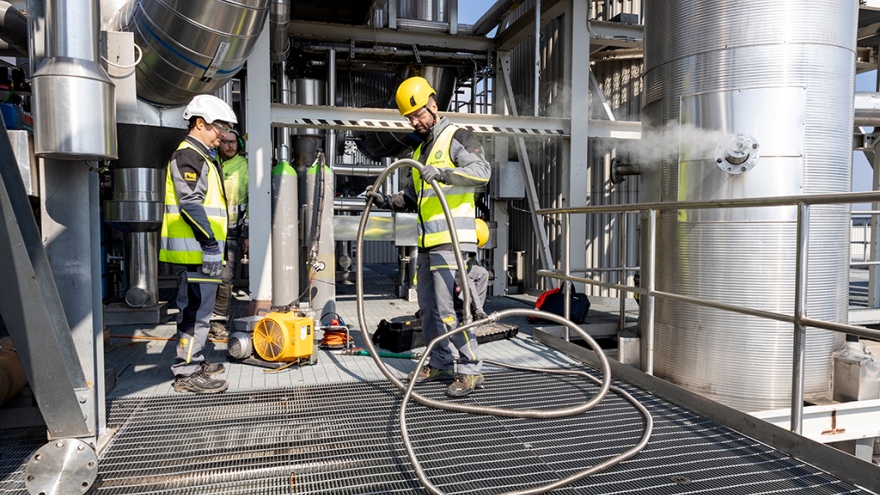 Io Antonopoulou, participates in three major projects with carbon dioxide capture, including the VIVALDI project in collaboration with SunPine. 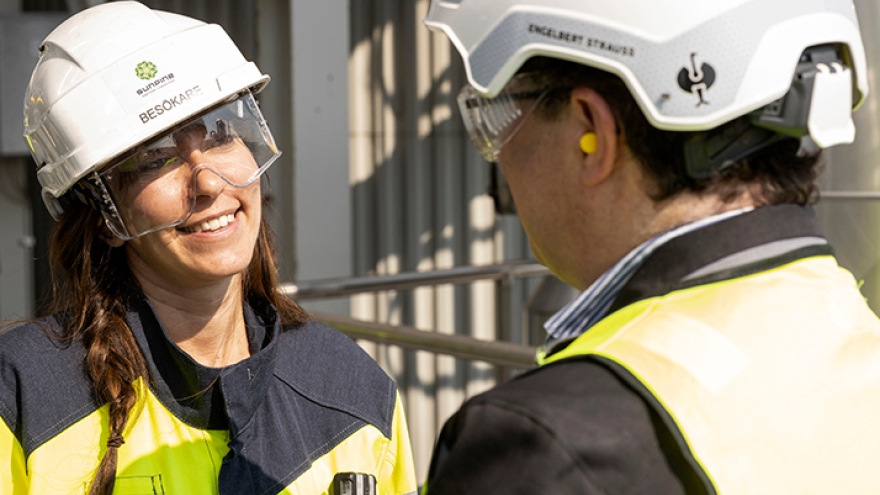 SunPine in Piteå in northern Sweden 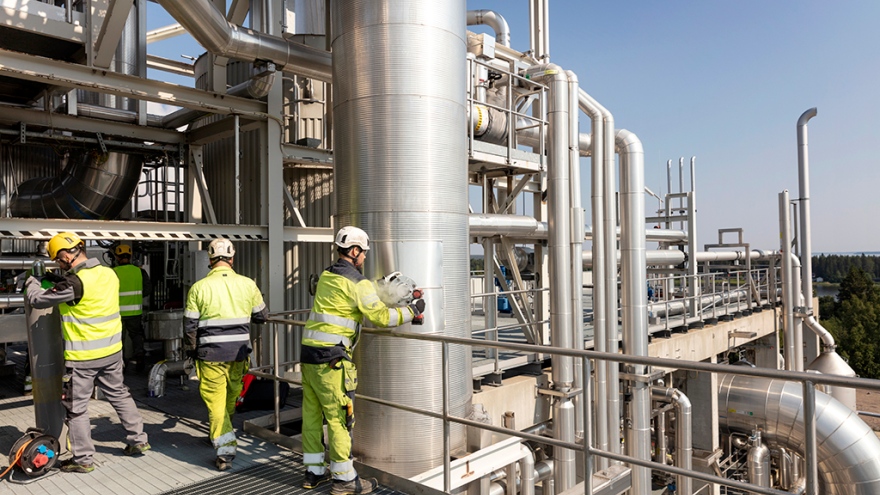 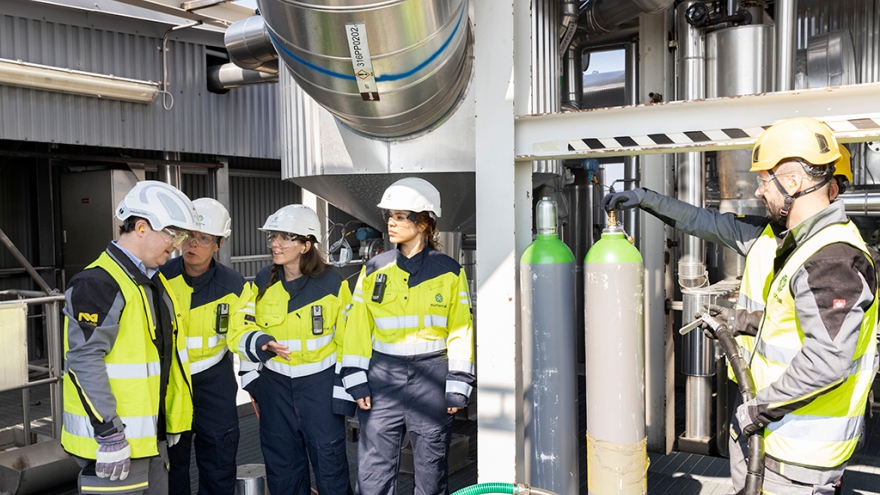 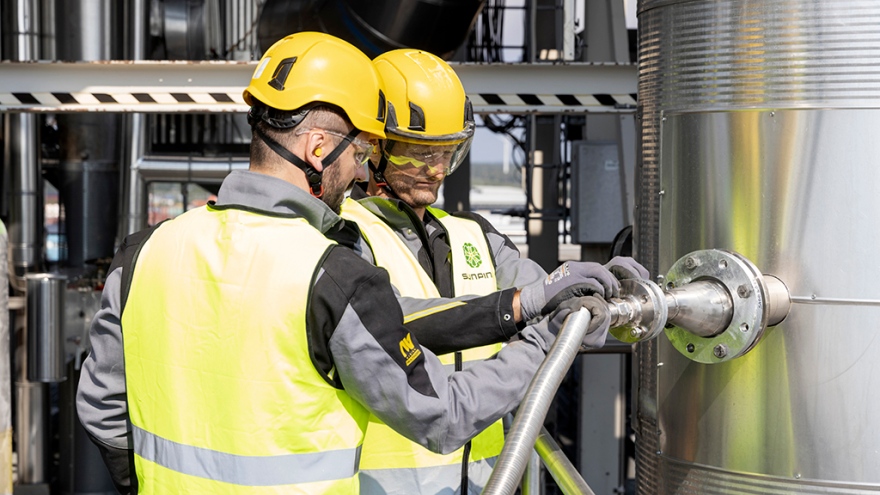 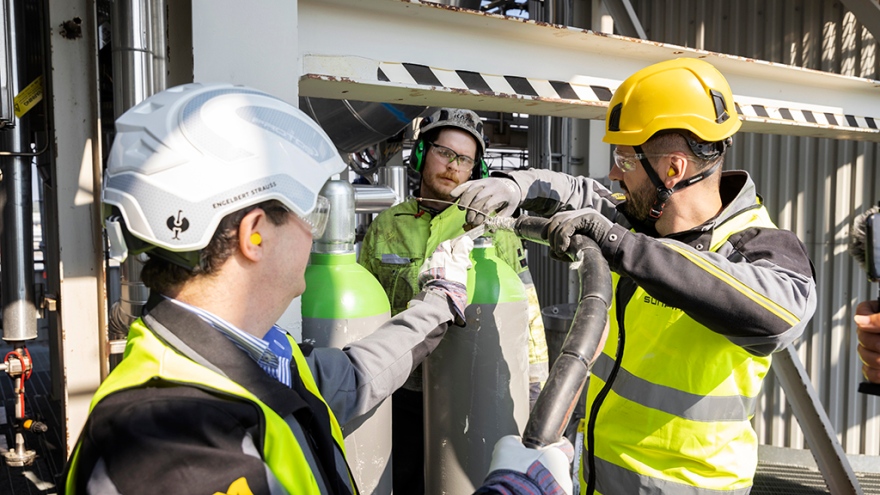 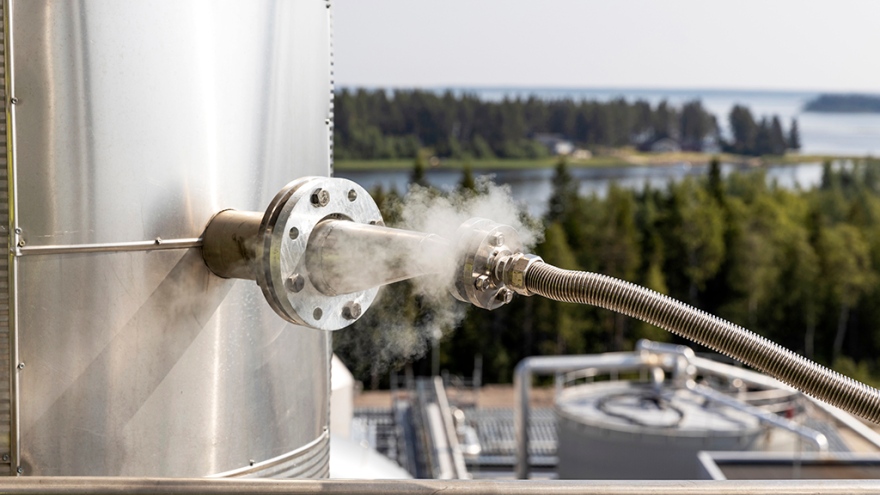 "The VIVALDI project will develop an innovative, sustainable and cost-efficient biotechnological solution to convert off-gas emissions from bio-based industries into CO2-based chemicals. In this way, the industry’s greenhouse gases emissions will not only be reduced, but also used as a novel feedstock for CO2-based chemicals, lowering the dependency on fossil fuels import and hence the exploitation of key resources such as energy, raw material, freshwater and land", Io Antonopoulou says.

On a hot summer day at the end of June, she and two other researchers from Biochemical Process Engineering at Luleå University of Technology were on the roof of SunPine's industrial facility in Piteå, where they participated to the off-gas collection from the pipe of the outdoor chimney via hoses, and stored under high pressure in large gas cylinders. A process which today is very difficult to carry out and which in this case required expertise from Krajete GmbH in Austria. The gas cylinders were then transported to the lab at Luleå University of Technology, where Io and her research team will work on CO2 capture from the collected gas to finally obtain a CO2-enriched and clean gas stream.

"In our group, instead of using harsh chemicals as absorbents, we capture CO2 using an enzyme called carbonic anhydrase. The novelty of this process is to utilise this enzyme, which as a biocatalyst, accelerates the CO2 capture reaction, so the absorption step becomes very fast. In addition, it can be used alone, or by coupling it with mature capture technologies such as the amine scrubbing", Io Antonopoulou says..

The innovation behind the concept

Another advantage is that the form in which CO2 is absorbed in the liquid, requires less energy for the subsequent desorption step, thus making this process much less energy intensive, up to 25-30 percent compared to conventional methods.

"We believe that the role of carbonic anhydrase in CCU will manifest enormous growth during the next years", Io Antonopoulou says.

One of the major challenges with conventional CO2 capture is the high costs of the technology. Post-combustion CO2 capture mainly refers to an absorption step, where CO2 is ‘bound’ inside a liquid, an absorbent. Then the CO2-rich absorbent is heated at a desorption step, where CO2 is released in high purity and further compressed. Desorption and compression require significant energy. Moreover, transportation of compressed CO2 for use or storage is also highly expensive.

The role in the VIVALDI project

The task for the Biochemical Process Engineering group in the VIVALDI project is to treat and enrich biogenic industrial emissions using a technology that combines enzymatic CO2 capture and amine scrubbing and to provide highly pure CO2 compressed gas to partners for utilisation. The partners will use the CO2 stream for producing high-added value organic acids with important role in various industries, such as the food industry.

Important research for the climate

Industrial activities are responsible for a large part of CO2 emissions and for some industries that are crucial for future development, such as the cement industry, it is not possible to avoid emissions, as CO2 is a byproduct from their process. To decarbonise such industries, it is important to develop and implement CCU technologies to mitigate the non-avoided CO2 emissions.

"It is also important to mention that CCU is projected to play an important role even after 2050, that is the target year when CO2 emissions should have reached net-zero. Still, we will need to continue capturing CO2 especially from the atmosphere to mitigate our climate change", Io Antonopoulou says.

With a focus on the use of an enzyme

In 2014, Io Antonopoulou joined the group of Biochemical Process Engineering at Luleå University of Technology as a PhD student. Since then, she has been working focusing on bioconversion of renewable feedstocks to produce high-added value products.

"One of my primary focuses is to use the enzyme carbonic anhydrase to capture CO2 from industrial emissions or air and to develop novel technologies that can fight climate change. The captured CO2 can be further stored or converted to valuable chemicals, such as formic acid and methanol", she says.

"I grew up in Athens, Greece and studied Chemical Engineering at the National Technical University of Athens. By performing experiments in the lab during my master thesis work, I became interested very early in research and the methodology of developing new materials from renewable feedstocks using microorganisms and enzymes", she says.

The VIVALDI project has received funding from the European Union’s Horizon 2020 research and innovation programme under grant agreement N°101000441.

Here you can read more about IPCC AR6 WG3.

Together with Io Antonopoulou, the researchers Paul Christakopoulos, Ayanne De Oliveira Maciel and Ulrika Rova complete the team of the Luleå University of Technology involved in the project.

Read more about the VIVALDI project