Elisabeth Jonsson was the second to be employed when Luleå University was to be formed, to the left Eva Forsberg who is also included in the anniversary book as the first administrative staff. 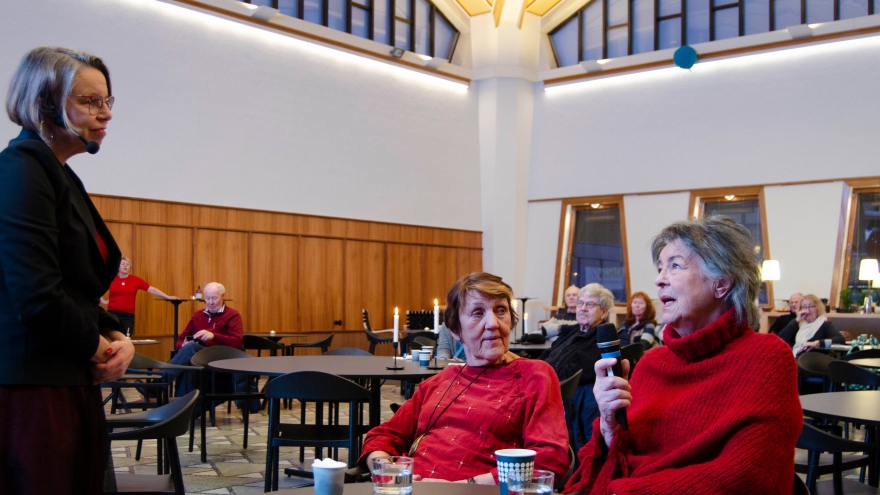 Maria Pettersson, professor of Law and Pro Vice-Chancellor Pär Weihed were forward-looking about the university's significance for society. As Head of Subject, Dean of the Board of the Faculty of Science and Technology, Erik Höglund has seen the development of Luleå University of Technology. Marianne Söderberg talks about all the exciting meetings in connection with her writing the anniversary book. Anita Byström, project manager for the anniversary, thanks the participants during the book release. "We have had many exciting activities during the year linked to our 50th anniversary. Now we top the celebration by listening for an hour to the journey we have made during these 50 years, and our tour guide who takes us on this time journey is Lena Callne", Pro-Vice- Chancellor, Pär Weihed welcomed.

A drive towards unknown land

Like the Christmas host on SVT, Lena Callne lit the candle on the table next to her gold-framed reading chair, opened the first page of the thick, flip-friendly book, written by Marianne Söderberg, and began reading the very first story about the car journey that company profile Rune Andersson made 26-year-old 1971, in the direction of Luleå. It was a time in life when the young civil engineer from Chalmers, had never been north of Östersund. He had been given the title of department director with responsibility for building up the university in Luleå, in just five months. On September 1, Luleå University would receive 50 students. Behind the wheel this April night sat the University's first employee and its main responsible person: “ Rune Andersson had been driving all night, the car was full of moving boxes, mattresses, blankets. Everything had gone very fast since that phone call from Ministerial Councilor Daniel Enqvist at the Ministry of Education . " (From the book "50 years of change").

As a surprise to the audience, Rune Andersson then participated, via zoom from his home. When asked how he as a 26-year-old dared to take on the challenge that followed assignments, he said.

"26 years at that time was something else, a 26-year-old today would probably not have made it. But I moved away from home when I was fifteen. During these years in Luleå, I can say that there were no problems that could not be solved".

Both the municipal councilor Nils Malmgren and the governor Ragnar Lassinantti acted quickly when needed. The collaboration with the business community was an important argument for the establishment of the university. The second of the first two employees at the future University of Luleå was Elisabeth Jonsson, who became the first secretary. She was in the audience this day and could tell how the work of creating the new university began in an apartment on Köpmangatan, without a single office equipment.

" It took a great deal of entrepreneurial spirit, hard work and unconventional solutions to get everything in order before the start of studies in September" (From the book "50 years of change").

Rune Andersson told the audience that during construction, 50 million SEK was suddenly missing for a necessary lab, so he contacted the governor and got to a meeting. When the question was asked at the residence, Lassinantti got up from the visitor Rune Andersson, to make a call. It went directly to Minister of Finance Gunnar Sträng. Lassinantti then returned, briefly announcing to Rune Andrsson that the 50 million SEK was no longer a problem.

Erik Höglund was there from the very beginning

A person in the book that Lena Callne likened to a popular hockey player who has been raised since childhood in the club to its own successful "product", is Erik Höglund, who has been faithful to the university in four decades, since he came inside the doors as a student and the youngest in Sweden to become Head of Subject, 33 years old. He remembers very well the pioneering spirit that existed, that the teachers were young and how he himself suddenly one day discovered that he was a teacher to his own former high school teacher. As Head of Subject, Dean of the Board of the Faculty of Science and Technology, he has seen Luleå University of Technology develop.

The future in focus

1971, there was only one large field on Porsön in Luleå. But the field was built on and today the university has 17,000 students and 1,700 employees and is also located in the study towns of Kiruna, Piteå and Skellefteå. What does the future look like then, what makes Luleå University of Technology continue to develop towards the future and the investments that are being made, not least again in the basic industry in Norrbotten, to achieve the UN Global Sustainability Goals with reduced carbon dioxide emissions. Maria Pettersson, Professor of law, said that, as a result of Luleå University of Technology's ability to collaborate between different research subjects and faculties, the belonging and the closeness, the university has a good capacity and abolity to help with the major climate challenges. Pär Weihed also highlights that the university benefits society, a focus the university has had since Luleå University was founded in 1971 and which has meant that the university has always had great respect in society.

"We are an agile university and now it is important to continue with that until we turn 550", Pär Weihed, said.

During the book release, honorary doctor Svante Lindqvist (violin) and Ulf B Jonsson (accordion) were responsible for Christmas music.