Jennie Hägg Wilhemsson was conferencier for the evening and interviewed Victoria Van Camp on the stage. Diploma for the winners. Erik Höglund, deputy principal at Luleå University of Technology, presented the award for Innovator of the Year Daniel Nilsson. 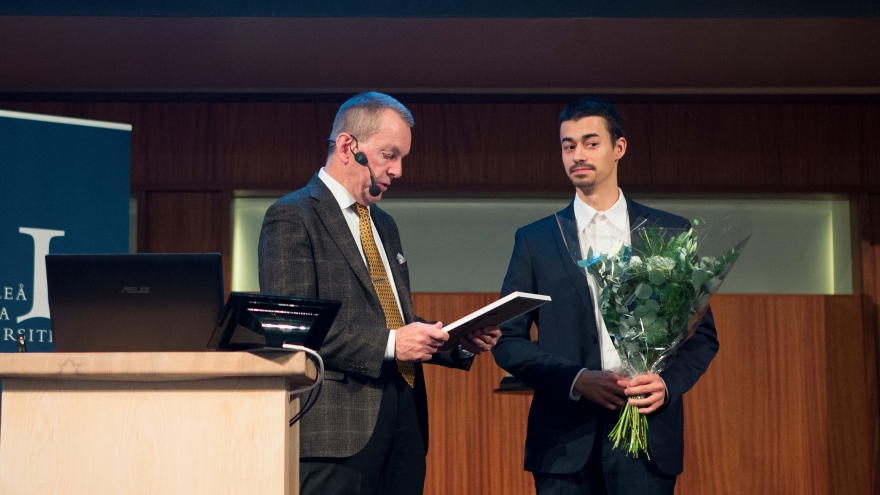 Guests of the evening listening to Victoria Van Camp. Candels and violin music greeted the 120 guests to the award ceremony at Vetenskapens hus on Tuesday evening. After mingling and a good dinner, Erik Höglund, deputy principal of Luleå University of Technology, awarded the prices from the stage.

In order to pay attention to former students, Luleå University of Technology designates the year's alumni each year. Alumner is everyone who has graduated at a university, and in this case at Luleå University of Technology. The alumni get the prize for their outstanding efforts in their careers or that they otherwise did something worth mentioning.

– Our alumni are important ambassadors for our university and by highlighting good role models, we create pride in our university. The alumni inspire our students to see what opportunities are available after graduation and this year we have the pleasure of appointing two prize winners, says Erik Höglund.

The first prize Year's Alumni 2017 was assigned to physiotherapist Fredrik Larsson from Trollhättan. There he played soccer for Trollhättans Boll and Sports Association and began to think about how he can make football injuries heal faster. That made him apply for the physiotherapist program in Luleå.

Now he lives in Gothenburg and is currently contracted with IFK Göteborg as a physiotherapist. He is also a physiotherapist for the Swedish national team in football. Due to an important game in Italy in a few days he could not attend the prize ceremony.

Watch the video where he talks about his work as a physiotherapist and studies at Luleå University of Technology.

Estimated mix of reality and academy

The second prize Year's Alumni 2017 year was assigned to Victoria Van Camp, originally from Ytterbyn outside Kalix. After graduating in mechanical engineering at Luleå University of Technology, she has had a very successful career that led her to become a member of Group Management and Head of Business and Product Development at the big global technology company SKF. Victoria is involved in several boards and has been chairman of the SKF University Technology Center at Luleå University of Technology. Since 2017, Victoria has been elected as a member of the Royal Engineering Academy of the Department of Mechanical Engineering.

– It's great to get this prize, mostly because my family and my friends up here see that this little girl actually became something.

From her studies at Luleå University of Technology, she remembers the cold and walking over the windy Porso Bridge, but also the mix of reality and academy.

– Afterwards, I realized that we had a lot of real problems and real lecturers from the industry and society, which was a natural part of the education. The best part was to get an employment after the education and feel that it is not such a big difference, says Victoria Van Camp.

This year's Innovator is a new prize that was awarded for the first time. The aim is to draw attention to innovators and entrepreneurship among students, researchers, teachers and other employees at Luleå University of Technology. The prize went to 24-year-old Daniel Nilsson who studies Master Programme in Space Engineering. During this year, he has started a company with incubation support, working prototypes and interested pilot customers.

With Wilda Tracking's positioning technology, work on complex deployment efforts in remote environments can be facilitated, increasing the ability to save human life with faster efforts and at a reduced cost.

– The encouragement and support I have had has been incredibly helpful. Now I'm going to focus on my graduation and then work on with the company and try to create a safer rescue service, says Daniel Nilsson.

The prize Year`s Collboration prize is awarded to the municipality in the region that initiated the most number of collaborations between Luleå University of Technology and companies. The prize is awarded for the third consecutive year. For the second time, the prize goes to Övertorneå municipality and business manager Stig Kerttu was in place to receive the prize.

– It's fun working with the university world and the academic world brings a lot of added value. The contacts with the students and others who work at university have been very helpful over the years.

The prize has a background in the intensified focus on cooperation with companies in the region that Luleå University of Technology initiated in 2011, and has been conducted in close cooperation with the municipalities' business units in the region. The effort has since been strengthened through the Structural Funds project Enterprise and Academy Cooperation in the Region, run by the Luleå University of Technology Innovation Office together with LTU Business AB since January 2016.