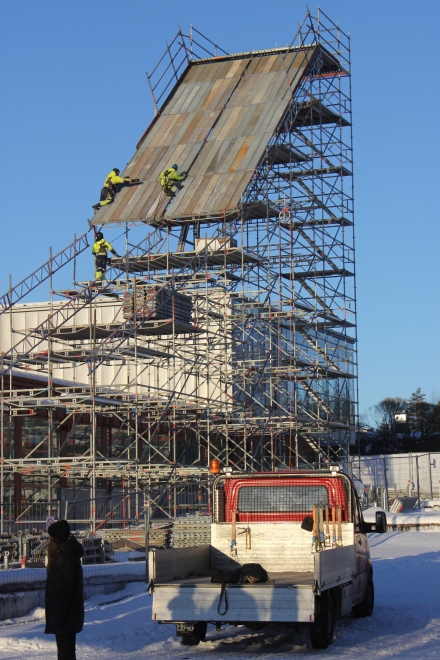 LTU Big Air, a ramp with a 40 degree tilt at the beginning of it Photo: Katarina Karlsson View original picture , opens in new tab/window

Last year the competition - and the event was a great success with a record number of visitors. This year the ramp will be six meters higher and the students behind the event believe in a doubling of last year's audience, to 3 000 spectators when the competition takes place this year on February 13.

- It is the Attendance we hope, at least. Last year, the contestants were deeply impressed by the turnout and engagemanet from the audience. It received the highest rating of some of Sweden's top riders, says Jakob Eriksson, project manager for the Big Air and student at Master Programme in Civil Engineering at Luleå University of Technology.

The contest will be filmed by the drone, commented and broadcast live on the Web.

Between qualifiers starting 17:00, and the final is 19:00 there will be a spectacular fire show, followed by an awesome firework display from the 18-meter high ramp.

Winner of last year, the LTU Big Air 2015 in the ski class, was Erik Lundmark with its "Flat 900 Safety" and winner in the snowboard category, Tobias Karlsson. The winner in the women's class was Ida Sivander. The winners of the sickest trick, "Sick Bird" was Niklas Pittja Grand Lund with his attempt to "Kangaroo Flip ', and Oskar Vesterlund who made a" Switch backflip Truck Driver ".

The question is whether they will protect their sucesses this year? The prize pool for this year's Big Air is at least 32 000 which is divided between the prizewinners.

LTU Big Air is not just the quality jump competition, even if it is a real people magnet. It is also a much appreciated free winter event for students, staff and the public, a celebration of winter and winter sports. From 12: 00- 17:00 Saturday, February 13 in the area at Luleå University of Technology. There are opportunities to try cross-country skiing, skating, dog sledding, snowshoeing, Fat-Bike, lassoing and more.

- It's great fun to work and develop this event, making it a highlight in winter is something we feel strongly about, says Jakob Eriksson

About last year's sucess and winners