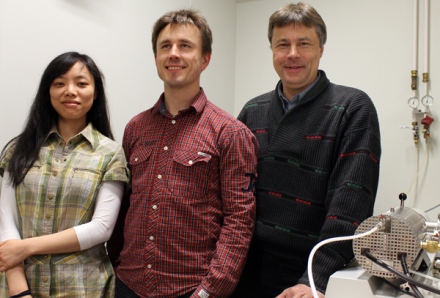 Fully developed graphene is expected to be used in a variety of areas, including leading the electricity and heat extremely well - ten times better than copper, and in addition, it is 100 times stronger than the strongest steel! The two Nobel pricewinners in physics could in their research show an easy way produce the graphene. But to measure the material strength required special knowledge and equipment. Precisely this is held by a research group at Luleå University of Technology and, therefore a collaboration was initiated 1.5 years ago between Alexander Soldatov, professor of physics at Luleå University of
Technology and the nobelprice winner Konstantin Novoselov.

The goal is to identify the properties of material and the researchers from LTU can now add a new tile in the game. At a conference in Kirchberg, Austria on high-pressure tests two prominent researchers from the Universities of Cambridge, UK and Columbia, the U.S presented results from deformation tests of the graphene, but with entirely different results. But it is not enough to stretch and deform the material, you have to do a completely different experiment the LTU-researchers argue.

- It's not enough to deform, you need to expose the material
to hydrostatic pressure and we can do so here at LTU. We deforms and compresses the sample in a high pressure cell, which means that we get a smooth deformation, "says Professor Alexander Soldatov.

Since the difference in results between researchers at Cambridge and Columbia has been clarified by LTU tests, the researchers is approaching the real proporties of graphene.  Alexander Soldatov, and two of his researchers, Dr. Shujie You, postdoc and PhD student Mattias Mases, as well as Nobel Prize winner Konstantin Novoselov, recently participated at a conference in Austria. The conference was held at the International Winter School of Electronic Properties of Novel Materials (IWEPNM-2011) in Kirchberg in the Austrian Tyrol. That is a conference where top scientists involved working with coal and other nanostructured materials meet.

Within the category of nanostructured materials, made of pure carbon, is in addition to the graphene, also "fullerene" and "carbon nanotubes" included. In the 80's fullerene was discovered (Nobel Prize in Chemistry 1996), which are carbon atoms bound together with extremely small balls into a net. In the 90's carbon nanotubes was discovered, which is a molecule in the form of a cylinder whose diameter is not more than one nanometer. The newest material graphene was made in a very simple manner by the Nobel prize-winners. Using standard office tape graphite could be divided. Graphite layers came off pretty easy because of weak bonds between the layers. The clean, fresh layer of graphite, applied to a substrate of silicon, covered with a thin film of silicon dioxide, can then be studied in an ordinary optical microscope

Read more about the conference in Austria