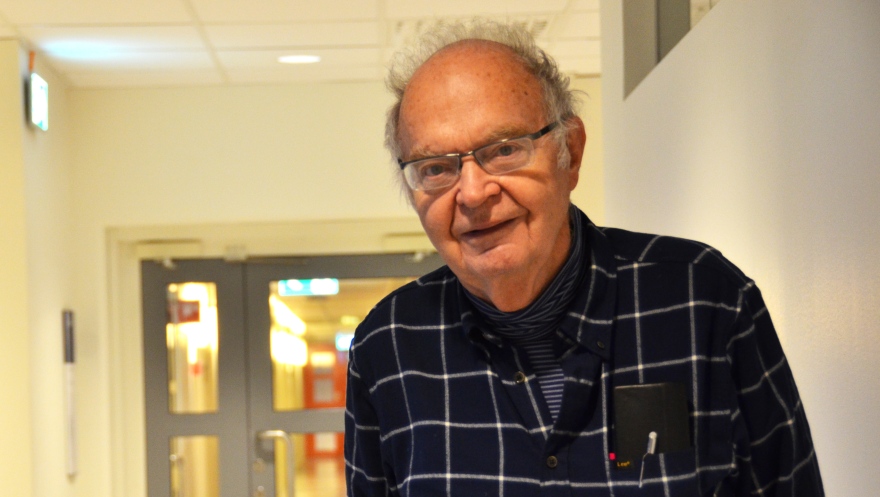 What does a good t-shirt look like? Can you shed any light on the current situation with the P equals NP-question? Is it possible to explain the theory of relativity to a layman? When the audience asked Donald Knuth questions, the subjects were surprisingly diverse.

Donald Knuth, Professor emeritus at Stanford University, is a computer scientist and mathematician. He has been called “the father of analysis of algorithms” and is the author of a multitude of profound books, including the series The Art of Computer Programming. Also, he has received multiple awards, for example the ACM Turing award, the National Medal of Science and the Kyoto Prize.

Last Friday, students and faculty got the chance to participate in one of Professor Knuth’s well known Questions and Answers-sessions. The set-up? Ask whatever you want; a procedure Donald Knuth started when he worked as a teacher. At the end of the lectures, he always let the students ask him questions.

– They were allowed to ask whatever questions they wanted, except questions about religion, politics and the final exam, says Donald Knuth.

One question that the audience in Luleå put forward was which of his tools he is most proud of.

– It’s like asking a mother who of her children she loves the most! I can’t really rank them. When I look back at things I wrote 30-40 years ago, I think “I’m glad I wrote that” or “why was I so stupid?”.

– What makes programming different from other things in the world? I think it’s the ability to understand different levels of abstraction. If you are a good teacher, these skills are the ones you can improve in the students.

– Anything you try to learn, try to figure out what it would be like to teach that to a computer. Ask yourself what that program would look like. I use computers and programs all the time, for various things, not the least in my music making.

Professor Knuth got the most cheers and applause when asked if he could explain what a crypto currency is.

– Crypto currency is the latest Ponzi scheme! The first investors are successful because they get other people to invest in it and then eventually everybody realizes that everybody in the world can’t win all the time.

Finally: do you want to know the answers to the questions about the t-shirt, the P equals NP and the theory of relativity? And maybe also listen to how Knuth explained crypto currency? You find all the answers in the video.

Professor Donald Knuth also was in Norrbotten to celebrate his 80:th birthday. He initially arranged a three day high level conference at Luleå University of Technology Piteå campus and then a piece of music that he wrote himself – Fantasia Apocalyptica – was performed on the famous organ acusticum in Piteå.