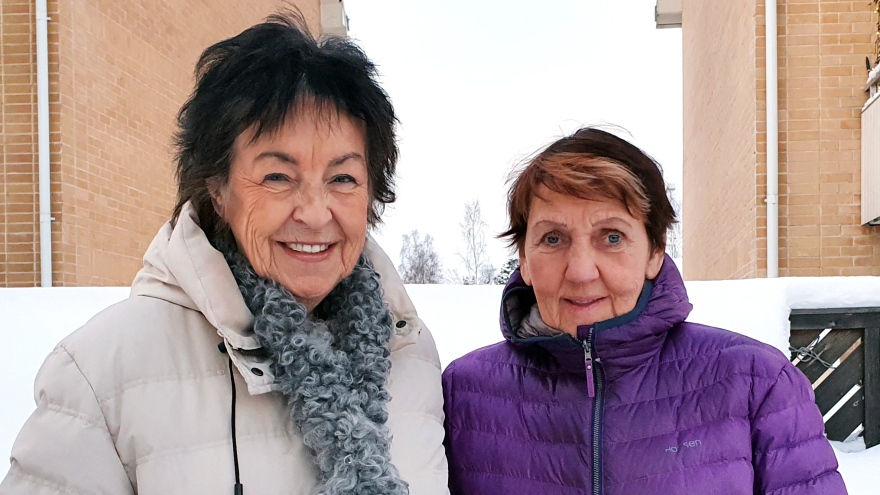 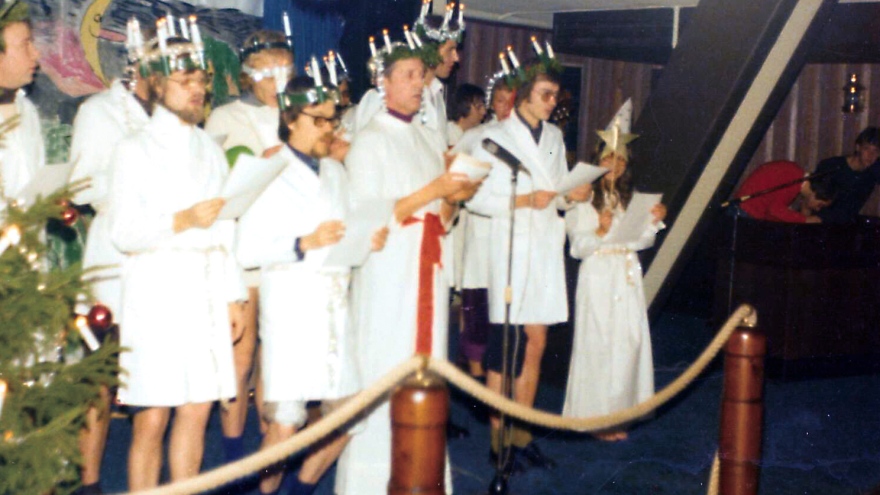 The winners of the masquerade competition, April 1974. Photo: Elisabeth Jonsson and Eva Forsberg 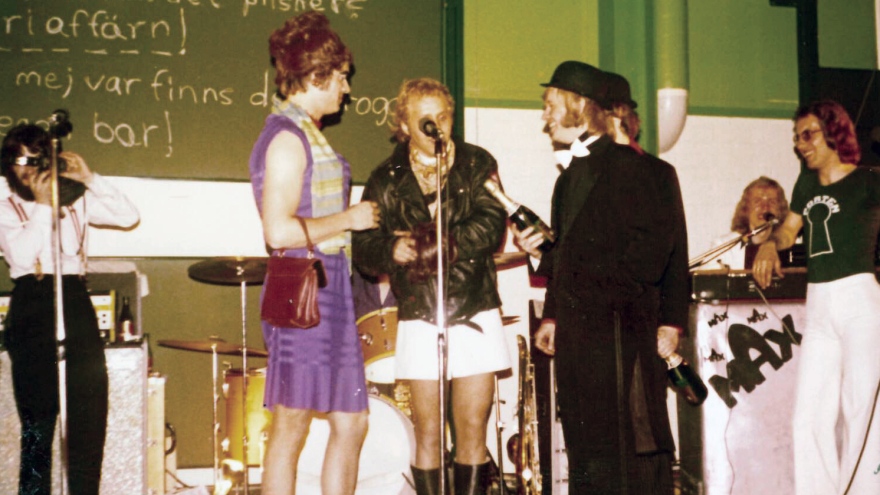 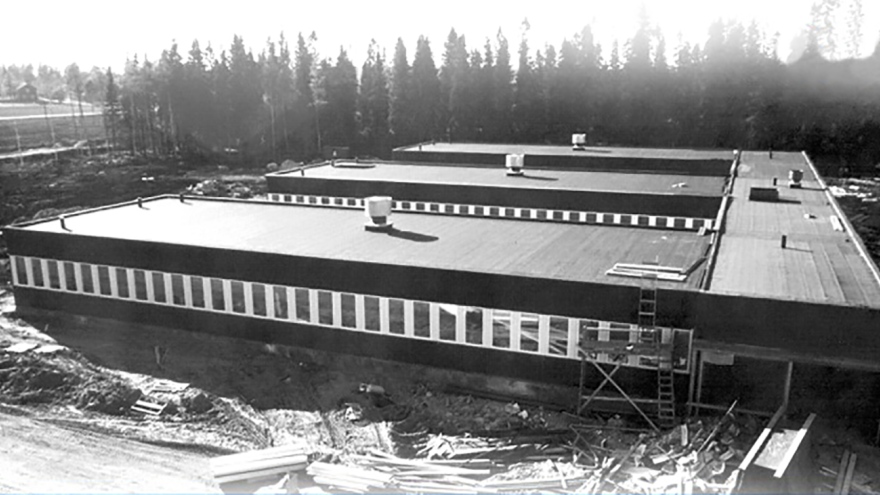 Plan of future development of the campus, 1971. 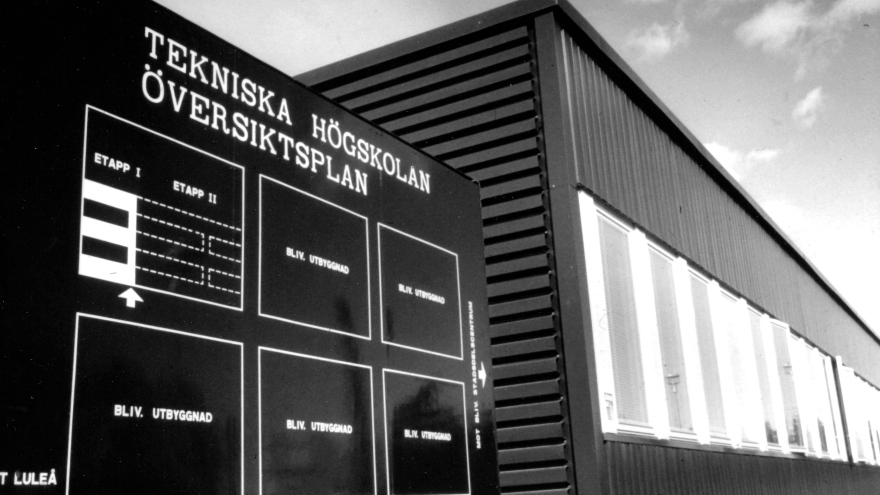 An early picture of Regnbågsallén with the D house on the right and "Human structure" straight ahead. 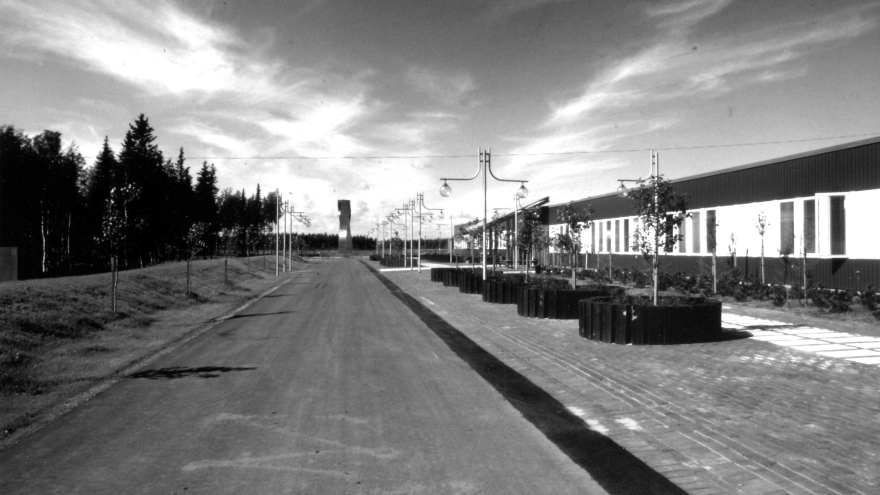 Elisabeth Jonsson was hired as an assistant on April 1, 1971. Now she works with assignments within the Honorary Doctors' Academy until March 31, 2021 when she has worked exactly 50 years at Luleå University of Technology. Another important  project was "Leadership development through mentorship for women in Norrbotten County", which has supported women in their leadership and contributed to changing the view of women as leaders. A gender equality project!

Eva Forsberg started at Luleå University in July 1971 and worked with diaries, finances and personnel issues. She graduated in 1981, when she started at Umeå University. After returning to Norrbotten, she became one of the participants in the first round of the leadership project above. In the following years she was also a mentor to three women who underwent the same education.

At 8 o'clock on April 1, 1971, Elisabeth Jonsson received Rune Andersson outside the apartment on Köpmangatan 6, where they were to start the new university in upper Norrland. Rune had been driving all night and needed to rest, but asked Elisabeth to go to the municipality office and pick up what was needed for the business. The apartment had only two desks and a kitchen table.

Eva Forsberg started in July of 1971 and remembers that there was a refreshing settler spirit in the group. Not infrequently, they worked 12-hour days and then went down to the City Pub and had a beer before cycling home in different directions. There was a lot to be arranged before September 1: students would be recruited, staff would be hired, workplaces and school halls would be planned and syllabi and information materials would be produced.

– Rune was easy to work with and contributed a lot to the entrepreneurial feeling that permeated the work. He was driven and there was always a feeling that "this we are going to fix", says Elisabeth Jonsson who worked as an assistant to Rune.

One of the employees did not have her own workplace but sat at the kitchen table and worked. Every coffee and lunch break she had to clean her things so they could sit there.

– It was a fun work environment because they listened to the ideas we had, we had the chance to develop our skills and had a lot of freedom under responsibility, says Eva Forsberg.

The first years on Porsön

Eventually they managed to become seven people in the apartment before they moved to Porsön. The first 50 students who came to the university in September 1971 were the same age as the staff, which led to the emergence of a special community. The students, as the first group at the university, had a lot of fun and were well taken care of, they were even served coffee during the exams.

They often found opportunities to celebrate and have parties held at someone's home or in the D house's restaurant. They did not discriminate between students, administrative staff, cleaners or academics. Anyone who wanted to hung out and most parties were spontaneous. Of course, some love sprouted, and more than one couple met at these parties.

Luleå University Sports Association (LHIF) was started at the same time together with the students. The sports hall on Porsön was built and volleyball tournaments were arranged there, which ended with a party. There was a choir at the university and both Lucia celebrations and a May bonfires were arranged.

The organisation at the university was very flat with a nice cohesion. There was no competition, everyone was treated equally and was easy to deal with. Even those who came from outside felt the atmosphere.

– You had to jump in where it was needed. I worked as a secretary to a professor, but sometimes I was in the switch and sometimes I had to be an exam guard, says Elisabeth Jonsson. Those who were a little more strict and square probably had a hard time, she continues.

Every lunch Elisabeth and her boss went and had lunch together, and every lunch the professor fetched coffee  for his secretary.

Elisabeth and Eva say that it felt like the university college was growing every week. In the autumn of 1973, the research started and researchers from both Sweden and other countries came to Luleå. For a long time you could say that everyone knew everyone, but then the university college became too big. Elisabeth tried to keep track of all the names and it worked until 1975, then she had to give up. When they started with dissertations and professor installations, the more orderly sittings and parties began to be arranged, the ones that are reminiscent of those we have today.

Among other things, Elisabeth worked with "Business Internship" which raised the level of education in companies and organizations in Norrbotten County. The goal was to offer graduate students a six-month internship that was "free" for companies, funded by several parties in the county. In 1971 there were five civil engineers in Norrbotten, after 15 years with this project the number was significantly higher.

Elisabeth and Eva remember the first time with great joy.
– It is the most fun employment I have had, to be involved from the beginning was something very special, says Eva Forsberg.

Elisabeth Jonsson agrees:
– We have had a lot of fun both professionally and on a personal level. Luleå University of Technology is in my heart, I have enjoyed myself fantastically well and therefore I have stayed for 50 years. I have had fantastic opportunities to run development, education and change projects that have been crucial for the development of this county, she concludes.