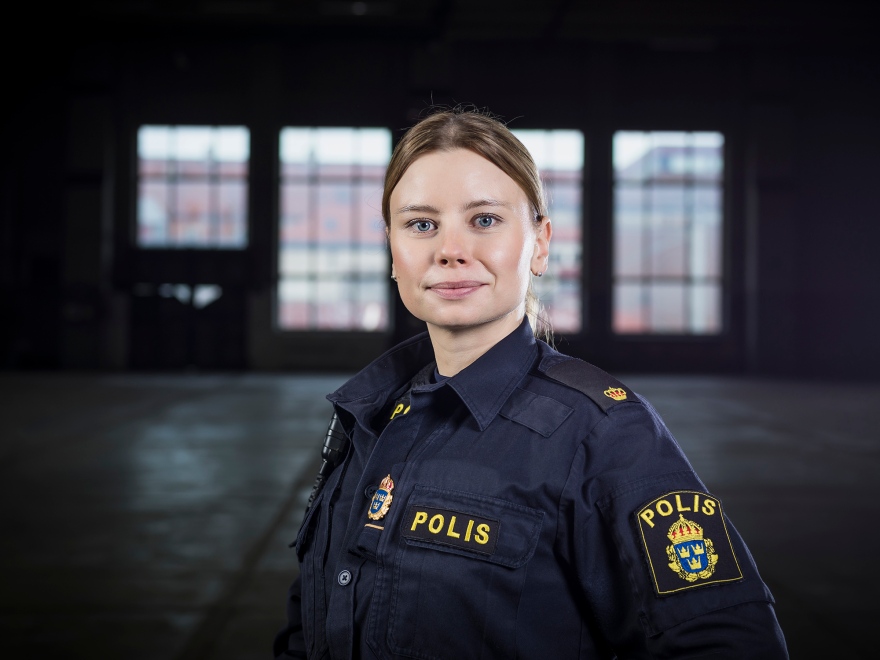 Amanda Jansson has known all her life that she wanted to become an actress without actually having had any source of inspiration in the family. The closest inspiration she can come up with is her grandmother who sewed and painted and with whom she had a close relationship. The form of expression was different but the drive to interpret and express was the same. Her first theatrical memory was a the play Mio, my Mio (based on the Swedish author Astrid Lindgren's book with the same name) that she saw as a seven-year-old.

– I became curious of the fantasy world they conjured on stage. I felt strongly that I wanted to be a part of it.

The choice to study theater in upper secondary school (gymnasiet) at home in Gävle was natural and after that she continued with theater at Fridhem's folk high school in Skåne. The second time she applied to the Theater Academy at Luleå University of Technology, she was accepted.

Amanda Jansson describes the search process as an education in itself. After a few times, you learn how to do it. The first time she made an audition was in high school. It was also the first time she used a script.

– I had no tools at all. Just before it was my turn, I imagined talking on my cell phone in my scene. I did not have a clue about why I chose to do things a certain way, for example why I chose to stand up or sit down. You need to know that as an actor.

At the Theater Academy, she sharpened the tools she had received at the folk high school at the same time as she acquired new ones. She already got her first lesson at the singing test in Luleå when she sang "Är du fortfarande arg?" by Annika Norlin (Hello S.

- The teacher asked me what the song was about. When I replied that "I think" she interrupted me and said that I was defending myself. As an actor, you have to decide what a text means in a given situation. Then I got to sing the song to one of the actors in the jury. It was fun because it became a completely different song when I got to do it in a stage situation.

One technique that Amanda Jansson brought with her from the Theater Academy is to isolate the words in a text. She exemplifies by reading a randomly selected sentence in the newspaper that lies next to her and stops at the word "kitchen". Words are just a compound of sounds that receives a meaning in the agreement between people that they should mean something. But what?

The possibilities of a "maybe"

– When I say a word on stage, I may have tried different emphases and meanings of the word a thousand times. By slowly taking me through the text, a creative process is set in motion. I know exactly what that kitchen looks like. It can also be about looking at a word as if you saw it for the first time. Take the word "maybe". It is made up of the words "may" and "happen". A word of opportunity. It is beautiful!

Amanda Jansson emphasizes that not all techniques are suitable in all contexts and for every person. Each actor must find his own tools.

– It is so easy to think about what is right and wrong. Instead, focus on what you think is fun!

The Theater Academy also gave her a larger network. For Amanda Jansson, who does not come from a theater family, it meant a lot to get to know professional actors during her internship at Norrbottensteatern and just to get a page in the Artist Catalog - the Theater Association's search service for the stage and film industry. It is difficult to get into theater college and you feel selected. After graduation comes the cold shower.

- You go from being a cool theater college student to an unemployed actor.

Tossed into a children's play

For six months, Amanda Jansson was unemployed except for a job as a personal assistant, dropped in an apartment in Stockholm – a city where she lacked contacts and context. But after a whie things got better. Arbetsförmedlingen (Swedish Public Unemployment Service) arranged speed dating with theater groups in Stockholm and Amanda Jansson was thrown, the week before the premiere, into a children's play.

– I have never really dreamed of playing theater for children, but it was fun. Kids are not so damn worried about making mistakes. It's sickly frustrating and wonderful at the same time. They engage more actively in the play and they are mote generous with their own feelings than adults.

She auditioned for the Thin Blue Line already during her time in Luleå. The casting director Lotta Forsblad had found her name in the Artist Catalog and thought she fit into what they were looking for. The series is special with its realistic, almost documentary style. But Amanda Jansson does not think that the style is more difficult than other stage expressions. It's basically the same craft. The police uniform does its thing. Something happens in her body when she puts it on. In a sense, the uniform is a stage costume; real police officers take off their civilian clothes and enter the role of representatives of the state's internal monopoly on violence.

– An important difference is that we have been much freer in how we can move in the room.In other recordings, there may be a lot of markings on the floor that one should relate to: "stand on that mark when you say that line" and so on. Here we have been freer in our movements. Handheld film cameras have been used in almost all scenes and the camera crew has thus been able to follow us more easily. It's like a dance and our photographers have been very good at dancing.

The series and Amanda Jansson have received great appreciation, both among critics and viewers and she has her very own fan base. There are even viewers who have pierced themselves as her character, Sara. But the attention that comes with the job is not always good. She has not always received good reviews.

– I felt so terribly bad the first time I got bad reviews. It's so personal. It is my voice that is heard and my body that is seen. Then I have to remind myself that it's just one person's opinions. But I have learned that if I can be proud of the content and the collective I have worked with, it matters less what others think. And that's exactly how I feel about the Den tunna blå linjen.

Theater is the art of dissemblance and still for real. Amanda Jansson has experienced this on her own body.

– I have returned home from recordings of Den tunna blå linjen and thought "What have I been through?" My body thinks it's been involved in an assault. Though I know it's pretend, the emotions are real. This agreement, that you in the audience agree to watch us when we play is so damn beautiful. Together we escape our own reality to cope with it. It's beautiful and a little sad.