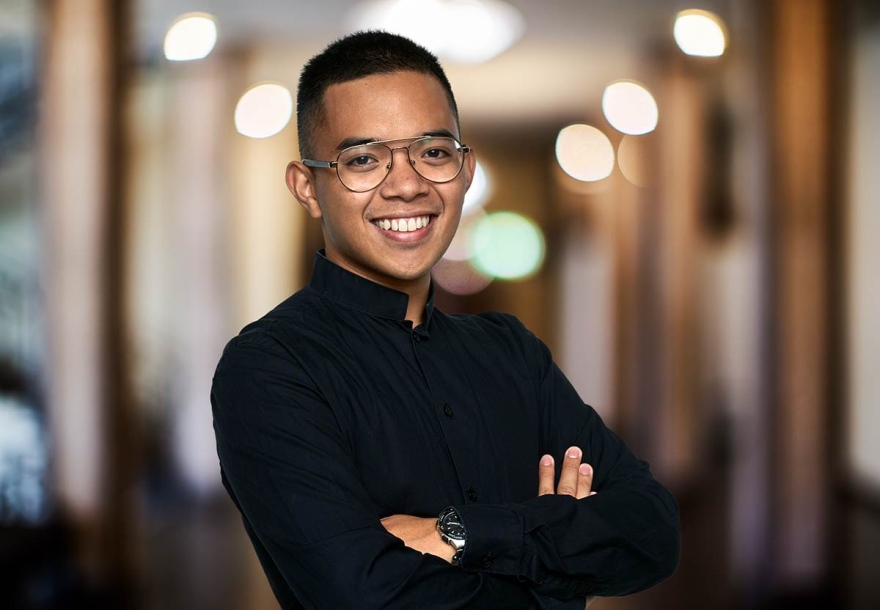 The competition was comprised of four rounds, and a Pre-Screening round, beginning with 483 applications. In the first round, 56 were invited, on the 2nd Round 26, on the 3rd Round 14 and only 6 competitors in the final.

Due to the pandemic, all rounds were recorded on video instead of performed live.

“It was quite a challenge for me to perform without an audience. I consider myself a spontaneous artist who need the energy from an audience. My solution was to imagine an audience to whom I could communicate my message”, says Rafael Adobas Bayog.

Played with a pianist

In the pre rounds the competitors got to choose from a list of musical pieces. For the final round, however, all the finalist was given the same pieces:  “Concerto in D Major” by W.A Mozart and “Ballade” by “Frank Martin”.

“They are both well-known standard pieces, thus I found it rather hard to be original in my interpretation of them.”

He predicted that the other competitors would play their pieces with technical flawlessness. Therefore, he decided to choose another path in his performance of the two, rather different, pieces.

“I wanted to express the playful, almost childlike, approach in Mozart’s piece whereas, in contrast, I tried to focus on the dark, passionate atmosphere of the Ballade that Frank Martin composed during the World War II.”

Became a flutist by coincidence

It was by coincidence that he started to play the flute when he was eight years old. His older sister played the piano. Thus, his parents wanted him to play the same instrument to save money.

“Since I ranked first at the entrance examinations, I was the first to choose instrument in my school. By mistake, without realizing it, my father said “flute” and afterwards, when all the pupils had been assigned an instrument, it was too late to change.”

Over the years Rafael Adobas Bayog has become very fond of his instrument.

“The flute has a very direct connection with the breath. It’s like being a singer. You use your imagination to create your own voice with the flute.”

Student of the International Orchestra Academy

During the autumn 2021 and spring 2022 semesters he has been a student of the International Orchestra Academy – a programme geared towards students on an advanced level who want to heighten their knowledge as orchestra musicians.

“It has been very rewarding for my musical development. During the years, I have practiced for hours every day on my own. But my reality is to play with others. The course has taught me to become a better listener, not only on my colleague’s musical performance, but on their ideas. After all, an orchestra is not so different from a company or any other organisation; it is about working together towards a common goal.”

“This is very important. As a musician you are a stage artist, thus your artistry requires stage presence. Your body gestures and your facial expression contribute to the overall experience of the audience.”

Recently, he won another competition for the Siemens Arts Program. Together with a violinist, he has been chosen to perform a 45-minute solo recital in Carnegie Hall in New York on 22 June.

“One of the pieces I will perform is a composition of my own called “Music is life", which portrays my vision of life in all its aspects, with its lights and its shadows. I look very much forward to this, says Rafael Adobas Bayog.”

Rafael Adobe's Bayog pieces from the third round of competition