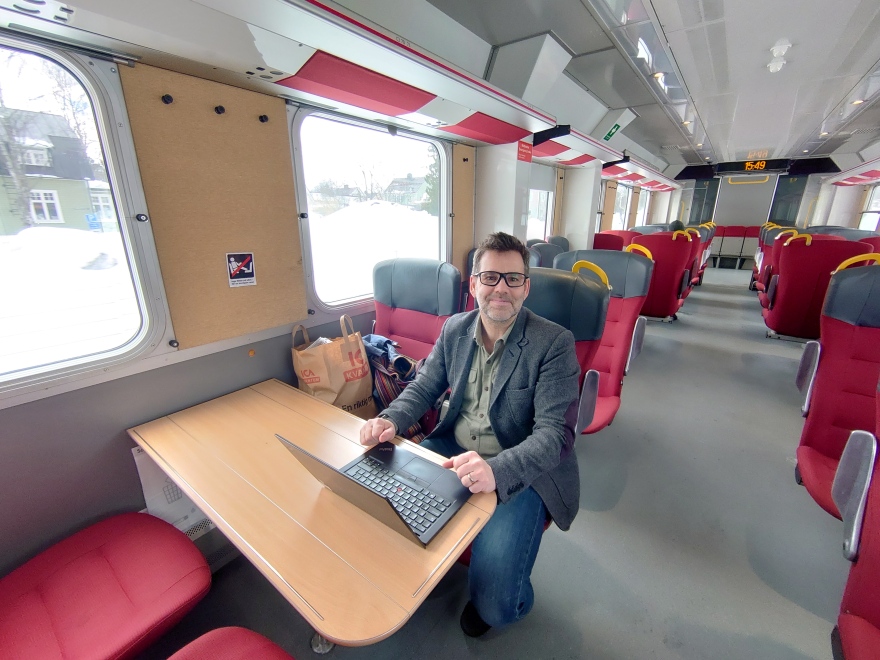 For one month, seven employees at Luleå University of Technology commute by train to and from work. It is Regionala kollektivtrafikmyndigheten, RKM, that works actively to inspire increased sustainable travel for business trips and commuting trips in Norrbotten together with Vy and Norrtåg. Current routes are commuting to and from Haparanda, Kalix and Boden to Luleå. One of these test commuters is Lars Bergman, project manager at the Division of Premises and Service.

"I have for many years commuted between Boden-Luleå, both with buses, but also with my own car. Thought the test sounded exciting. I have seen the train whizzing past me along Road 97. The train is an environmentally friendly alternative and I wanted to test if it would work for me.  Notviken station, where I get off the train, is fairly close to the university, about 1.2 km", Lars Bergman says.

How does it work in practical terms with logistics to handle it?

"This was the challenge, for example, to make it work with morning meetings and to get to and from the train, both in Boden, as I live a bit from Boden Centralstation (about 2,6 km), but also at Notvikens station, where I get off. It takes about 15-20 minutes to walk from Notviken station to the university area. Now in the spring you could take the bike on the train, and then shorten that part of the transport. When I´ve traveled by train, I have usually gone to and from the stations, and the positive thing is that you get an oppurtunity to exercise. But it also happened that I got a ride to the station in Boden from the home, based on time constraints, which is perhaps less good based on the environmental aspect.

How do you usually travel to work?

"My wife also works in Luleå, so we usually go together with our own car. Sometimes I take the bus instead. Now we have acquired an electric car here in the near future, so whether I will take a bus or train in the future is uncertain".

Describe your duties at the university, and which of them you can do on the train to and from work. How does it work?

"I work as a project manager at Division of Premises and Service at Luleå University of Technology, and I have a lot of tasks that are excellent doing on trains. Thare is seating with a table, in case the laptop is used. I also take the opportunity to answer emails and have time to make some job phonecalls and generally plan the day and its activities and meetings. During the walk from Notviken to the university, it is also possible to make some calls and to solve things over the phone. But it was more difficult to attend digital meetings directly in the morning, even if it is possible to connect with the mobile phone. But if you arrive at the station at 08.20 and the meeting starts at 08.30, there will be some technical transitions and difficulties when you then arrive at the office at the university.

Something you were surprised by during the experiment?

"Yes, I was surprised that the commuter Boden-Luleå has such modern trains; comfortable armchairs and alternative seating, both individually or at table seats. There are electrical outlets for charging a laptop or mobile. Another less positive surprise was perhaps that the trains do not sync better with local traffic at the end and start station at Notviken. But as I said, if the loan cycle had existed, it would have been easier in many respects.

The purpose of the project is to get companies and organizations to review their travel habits, with the goal of becoming both climate-smart, safer and more efficient.

"Had there been better and denser transport connections or environmentally friendly alternatives, for example like loan bicycles, I would have been able to take a later train both ways. Tips for the university, why not exhibit loan bicycles at Notviken station, much like we do with snow kicks on the is road in the center. There are very nice bike racks with a roof at the station" (Lars Bergman)