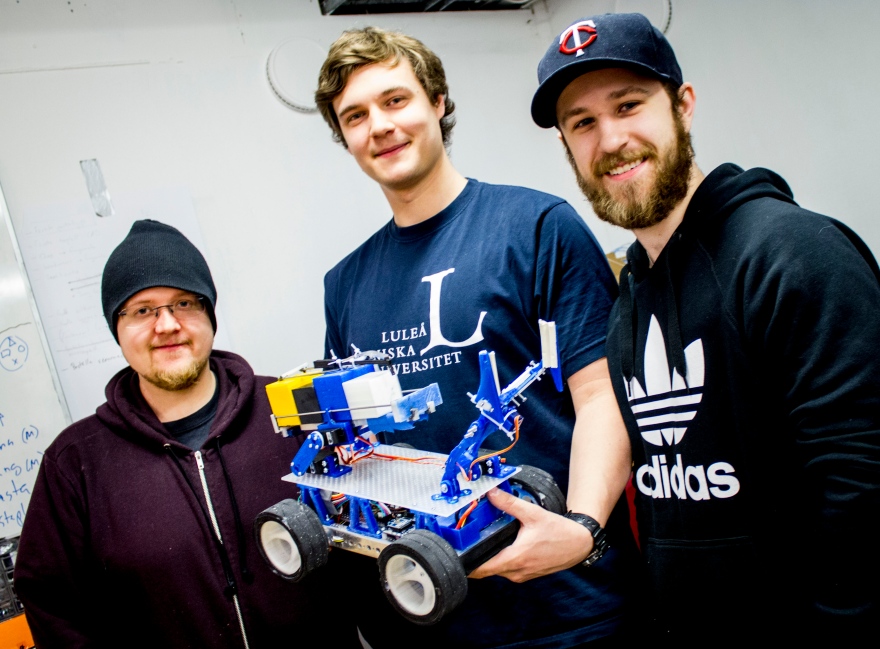 The competition is organized by Umeå University, and the team from Luleå University of Technology qualified for Friday's final already in January when they finished third in the qualifying competition.

– When it became apparent that we won, I felt two dominant feelings, says Robert Hedman, who has been participating in the competition before because he used to study in Umeå.

– Overwhelming happiness and some sadness. Winning has been a goal for several years – so of course I became overjoyed. Meanwhile, my former team mate Samuel was our final opponent and I saw that he got sad when loosing.

In the first heat of the final, the team should pick up four different sized blocks as quickly as possible and then stack them on each other. The Luleå team had a unique solution to the problem: they had built a tray on top of the robot that piled the blocks directly.

– Our solution was obviously better and faster than everyone else's, says Johan Carlstedt, and the team mate Olov Sehlin agrees:

– We have spent a lot of time on this robot, so it was extra fun that everything worked so well during the competition.

The Luleå team went straight to the final after the impressive stack of cubes. And the final was really exciting as it came to sudden death. The task was to break balloons attached to the opponent’s robots.

– If the first heat was about precision and building a smart robot, the final heat was much more of a chance. Things can break down and balloons break pretty easy, says Johan Carlstedt.

However, the team from Luleå University of Technology won.

What did you get for reactions from your contestants, any regrets about letting you join the competition?

– No not at all. They want us to come back next year and defend our title, says Robert Hedman.