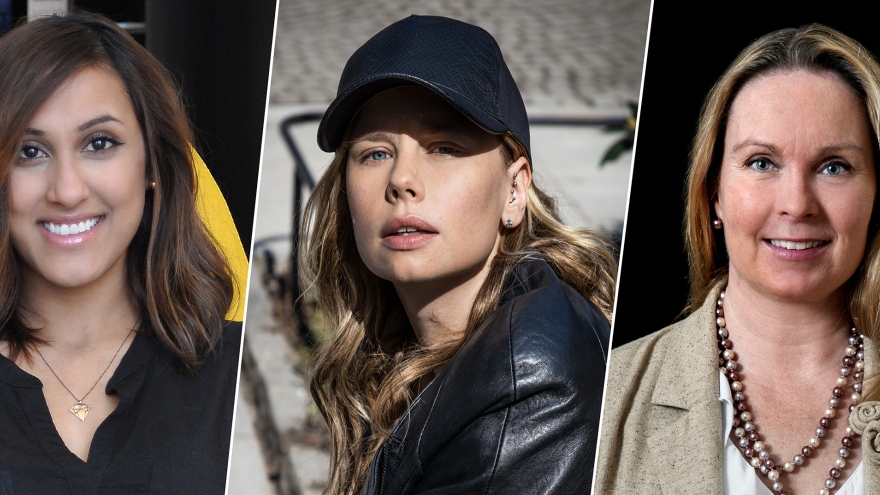 Maria Häll, Amanda Jansson and Shilpi Sinha during the award ceremony in Kulturens hus in Luleå. 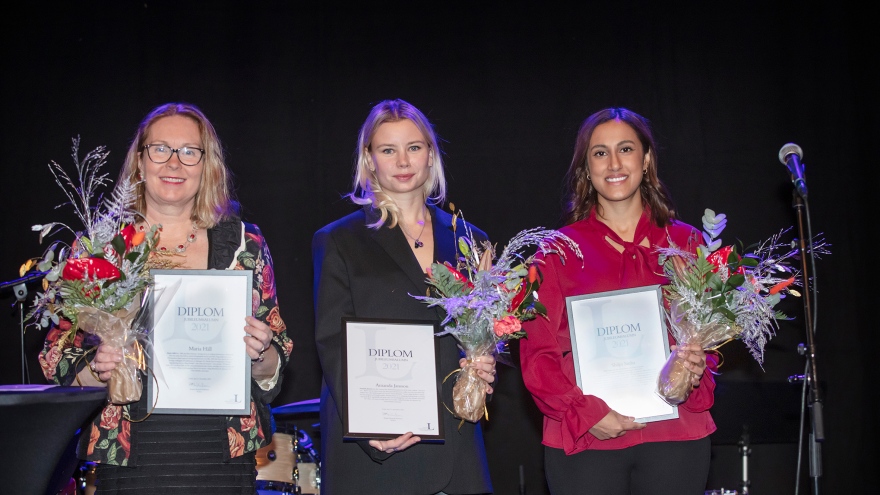 Alumni of the Year is an award to recognize the achievements of former students at Luleå University of Technology.  Previous recipients of the award include Northvolt's CEO Peter Carlsson, actress Sofia Ledarp and the Swedish men's national football team's physiotherapist Fredrik Larsson.

This year, Luleå University of Technology celebrates 50 years and therefore announces three Alumni of the Year 2021:

Actress Amanda Jansson, caught the viewers' attention and was praised by critics for her breakthrough role as police officer Sara in the award-winning SVT series "Thin Blue Line". Amanda, who grew up in Gävle, has a Bachelor of Arts Degree in Acting. She graduated from Luleå University of Technology in 2016.
– I'm so happy about this! When I went to the Theatre Academy, Sofia Ledarp was named Alumni of the Year and came and talked to us students. It is fantastic that I can also be a role model and show that it is possible, despite a tough business, says Amanda Jansson.

IT pioneer Maria Häll grew up in Luleå and in 1988 became the first woman in Sweden to take a master's degree in Computer Science and Engineering. She has previously been appointed one of Sweden's foremost IT authorities and has been head of the Swedish universities' data network Sunet since 2013.
- It's great and I feel very honored! My heart beats warmly for Luleå University of Technology and I have maintained ongoing contact with LTU over the years, says Maria Häll.

Shilpi Sinha, who grew up in Luleå, is an engineer in industrial design and graduated from Luleå University of Technology in 2016. After a stay in Silicon Valley, she made a quick career at Ikea. Today, Shilpi is the jewelry company Pandora's first UX researcher. From the head office in Copenhagen, she works to ensure that customers are met with good user-friendliness, regardless of whether they shop via the website or in physical stores.
– To become the Alumni of the Year was unexpected but honorable. I have always felt very proud to have studied at Luleå University of Technology, says Shilpi Sinha.

The three winners will receive their awards on November 11 in Kulturens hus in Luleå, in connection with the university's Jubilee Concert.

"Maria Häll became the first woman in Sweden to take a master's degree in Computer Science and Engineering in 1988. She has since had a very successful career with several high positions in the IT industry, including at the Ministry of Trade and Industry and SKL. In 2005 she was appointed one of Sweden's foremost IT authority by the newspaper Ny Teknik. She is a leading figure in Sweden's digitalisation and an important role model - not least for women - as a pioneer in the IT sector.
Since 2013, Maria Häll has been head of the universities' data network Sunet, at the same time as she has several important board assignments for the industry. She is a very worthy representative of alumni at Luleå University of Technology."

"After graduating from the Theatre Academy in 2016, Amanda Jansson has appeared in the acclaimed" Our time is now "," Beck "and on the theater stage. The big breakthrough came in the role as the newly graduated police officer Sara in the critically acclaimed SVT series "Thin Blue Line". The series was named TV drama of the year and program of the year at the Kristallen award.
Amanda Jansson is a versatile actress and contributes greatly to maintaining the good reputation that the Theatre Academy at Luleå University of Technology has in film and theater Sweden. She is a very worthy representative of alumni at Luleå University of Technology. "

"After graduating as a university engineer in industrial design in 2016, Shilpi Sinha has had an impressively quick career.
After completing her education, she received a scholarship to work with startups in Silicon Valley in USA and then a trainee program awaited at Ikea. Shilp Sinha was entrusted with starting and leading Ikea's organization for UX design and took on the role of acting global UX manager for digital channels. Today, she works in Copenhagen as the company Pandora's first UX researcher.
She is passionate about getting women to study technical education and has been involved in university initiatives and lectured to both current and prospective students. Shilpi is a very worthy representative of alumni at Luleå University of Technology. "