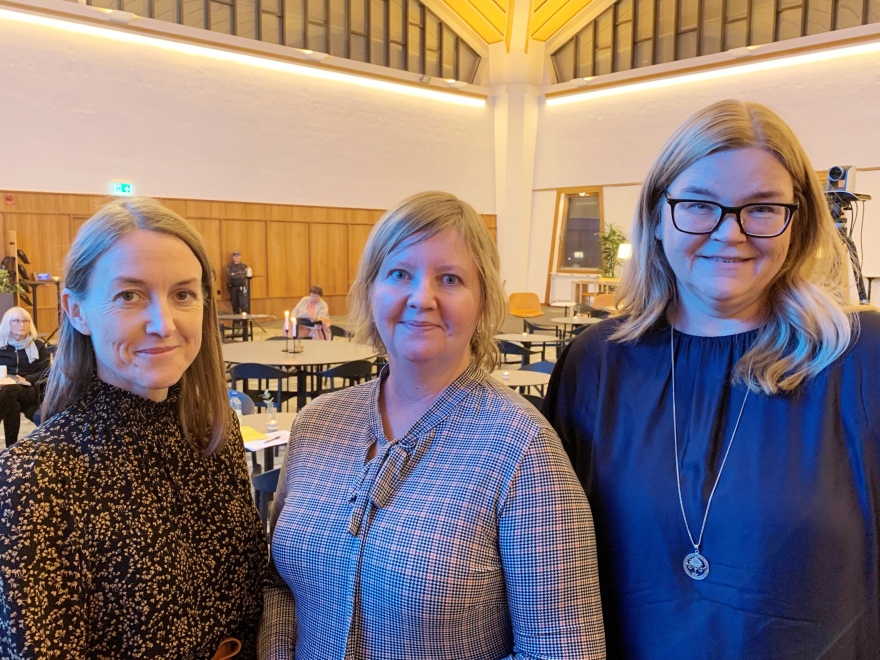 More and more people want to learn about democracy

There is a desire for knowledge about democracy in society, this was stated at the beginning of the panel discussion. And then what is democracy? Who are the people and what is the righteous government? Democracy can simply be divided into different layers with government at the top, then the institutions that build the functioning democratic society and that will safeguard our freedoms and rights. From 1945, civil rights are increasingly merged with human rights that are balanced against each other, Lena Berggren said.

– The right to vote is often used as a symbol of democracy, but that it is more to be regarded as a formal right, Josefin Rönnbäck said.

The panel recalled that we must all see democracy as a process and not a state. Our world is constantly changing.

– If we don´t make democracy all the time, work and grind on it, then we open the door for those who want to dismantle parts of it. That is why it is important that citizens are aware of and fight for their democracy, Lena Berggren said.

The several breakthroughs of democracy

Right now a democracy anniversary is taking place in Sweden, 100 years ago we got universal and equal suffrage, but what are we really celebrating? Josefin Rönnbäck said that the parliament and the government have decided that we will celebrate 2018–2022, because we have several breakthroughs. In 2018, municipal voting rights became equal, meaning no matter how much a person earned, the votes were equally valuable. In 1919, a bill passed that women should be allowed to vote on equal terms with men. In 1921, women voted for the first time in parliamentary elections and were also eligible for election. Women were elected in 1921, but it took 25 years until the first women from Norrbotten's constituency were elected to the Swedish parliament. In 1922, the first female members entered the Swedish parliament and the requirement for universal conscription for men to be allowed to vote was abolished.

Permanent residence to be able to vote

Who were excluded after 1921?
– One thing was that you would have a fixed address to vote and that excluded many Sami and Romani people. At that time, Romani people were not even allowed to obtain a permanent address. At the beginning of the 20th century, people had to go to the polls to vote, and set aside a whole day for that. For a maid or a Sami reindeer herder it was not possible. There were practical circumstances that made it difficult to vote for several groups, Josefin Rönnbäck, said.

The carpet of democracy is being rolled in

Lena Berggren believes that the carpet of democracy, that has gradually been rolled out, is about to be rolled in in several parts of the world, through various kinds of insidious restrictions on democracy.

She said that there are forces today in Sweden, and in our Nordic countries, which discuss that we should have stricter penalties for crimes committed in certain places or in certain contexts. Some of the proposals are linked to people's backgrounds. Then you are compromising something that is important for a stable democracy, namely the rule of law, Lena Berggren said.

When you look at countries where democracy is eroded from within, Lena Berggren continued, such as Hungary and Turkey, where you start politicising the administration of justice, you have different types of penalty scales for different types of criminals and different civil rights. One thing that is very important in a democracy is well-functioning institutions. When community service is dismantled, it is problematic.

The panel discussion contained many examples from our time, on the theme "Democracy – nothing to take for granted". After the conversation ended, a question and answer session followed with the audience present at Vetenskapens hus.