Marie Sofie Ulander want to be have knowledge about more than cardiopulmonary resuscitation if something happens that requires emergency treatment.

She has been involved with patients that has collapsed or had seizures.

During the examination of the course, the participants showed in a simulation that they can take care of a patient who suddenly become worse.

-I did not think I would be taking care of emergency cases to this extent, it has become more often than I thought, says Marie Sofie.
For a few months in early 2014, she read a distance learning course in emergency care at Luleå University to deepen her knowledge.
-In the municipality you works often alone and I have sometimes felt that I could too little to feel safe. When something happens acute you wants to know more than cardiopulmonary resuscitation (CPR), said Marie Sofie.

-This course has been great, I would love to go again, she says. 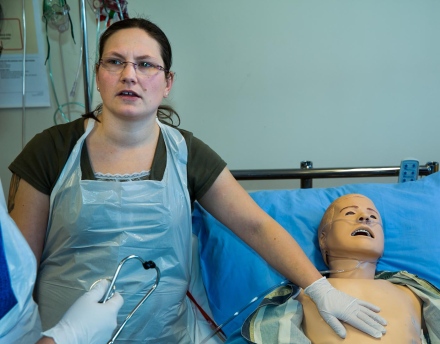 Erika Larsson received his nursing degree in 2012. She has been on maternity leave a period and took the acute course to brush up on her skills because she will be working on the ambulance the coming summer.

Marie Sofie Ulander and her classmates graduated during a day at the university in March.

The graduation included that they could master the so-called ATLS model (Advanced Trauma Life Support) for acute care.

Operations is carried out according to a flowchart of A to E (Airway, Breathing, Circulation, Disability, Exposure).

-It involves thinking systematically. One begins with the essentials, to secure airway, then checks to breathing and so on. You can follow it here to save lives, says Erika Larsson, a nurse from Hudiksvall.

Jonas Nilsson, a nurse in the emergency department at Danderyd Hospital, feel the course has given valuable knowledge.

-Even if you work daily with emergency care can always be better. Since it is an advantage if one were to look for a new job in the future, he says.