Entrepreneurship and entrepreneurial thinking is a part of training for occupational therapist during the fourth semester. Many ideas were hatched by the students. 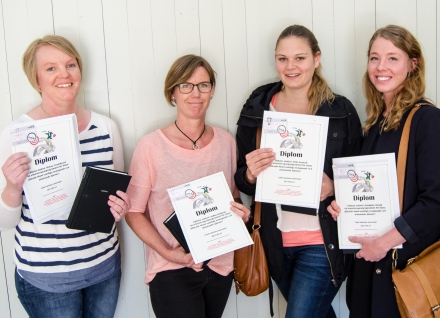 Prize for best idea within servicesector was won by Helena Fredriksson, Hultman Sofia, Sofia comforter Hay and Josephine Beach. The idea is as yet undisclosed.

– Great fun, it was totally unexpected. It is believed never to win, but there we were. Shocking, says Helena Fredriksson.

She and her classmates Sofia Hultman, Sofia comforter Hay and Josephine Beach took home the prize for best serviceidea.

What the idea is about is still a secret.

This is also the idea that won the product category.

- But we can say as much as it happens many cases accidents in homes, says Elina Firouzfar.

Elina Firouzfar, Malin Bostrom, Karin Rentoft and Jannike Enh won the award for best product idea. They indicate that it has to do with accidents in the home. The students really believe in their idea and has already formed a company, MEJKiteasy.

She stands behind the product idea together with Malin Boström, Karin Rentoft and Jannike Enh.

The girls are excited about their idea lauded because they worked hard on it.

They have now also created a company name, partly formed by the initials of their first names, MEJKiteasy.

– Now we'll try to come on. This product should be in every home in the future, they say.

The award ceremony took place on Wednesday 21 May

The award winners were selected by a jury consisting of representatives of LTU Business Development, LTU Career, commercialization ambassador at the Department of Health and Innovationssluss Norr.

Students work on developing ideas for products and services were performed within the course Occupational Therapy in a societal perspective.