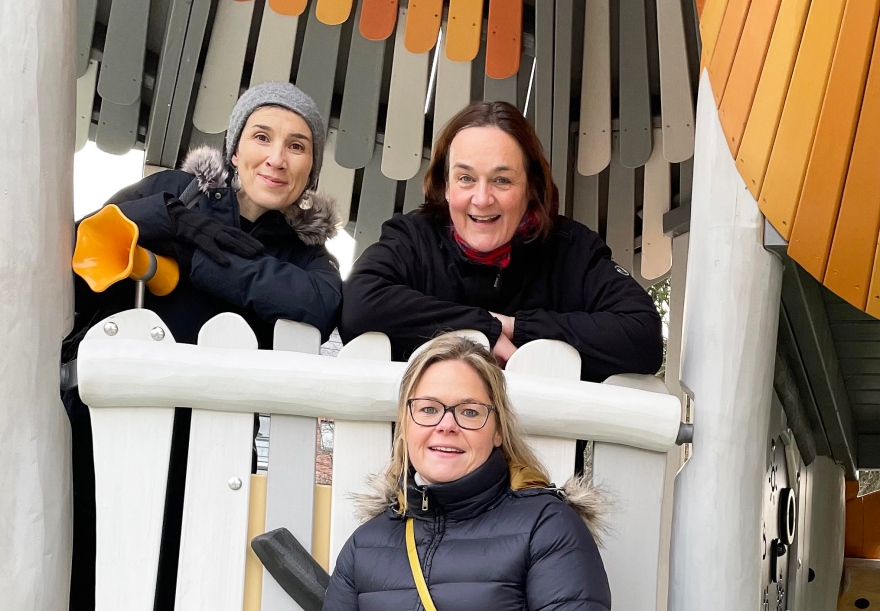 Michelle Bergin, Rianne Jansens and Fiona Loudoun are a certain part of their doctoral studies in Sweden within the P4Play project. View original picture , opens in new tab/window

The project P4Play, researching play and play deprivation within 4 strands: People, Place, Policy and Practice, includes eight doctoral students and four different universities in four different countries. Some of them are currently at Luleå University of Technology. Michelle Bergin, is from Ireland and is a doctoral student at LTU and stayed in Luleå for one year of the project. She is co-hosted by University College Cork, Ireland. Fiona Loudoun comes from the same university, is from Scotland and is in Luleå for a short time as LTU co-host her PhD project.

Rianne Jansens is from Belgium and she is a doctoral student at University College Cork and at Luleå University of Technology, she has been studying and working here at LTU for one year. Ines Wenger who comes from Switzerland, and has been at Luleå University of Technology for several visits, but is not with us this day when we meet at the university. They will all receive doctorate in Occupational Therapy – Occupational Science collecting double degrees from  two of the universities included in the collaboration.

“We investigate play in different dimensions, outdoor play at playgrounds as well as virtual play", says Fiona Loudoun.
They like this way of working, they appreciate being in a group where all doctoral students are interested in the same subject and at the same time are able to build a network.

Now, when they are in Sweden, they can note some cultural differences.
​"The children in Sweden are out even if it is raining, snowing and cold. It is not that common where we live. In general, they are out a lot, they pick berries and are fishing. And the fact that the schoolyards' playgrounds are accessible is fantastic. In our countries, it`s high fences around them. Then there are a lot of playgrounds here, only here on Porsön are they so many", Rianne Jansens says.

All three also state that even in Sweden, just like in their home countries, there is a lot to do to achieve greater accessibility to the playgrounds. There is not much for children with functional variations, who may have difficulty in moving, for example.

They have also seen that searches on Google give completely different results compared to them at the other places. Having access to two universities’ libraries is great, as they are some differences in access to journals.
"This means that we can get more material", says Michelle Bergin.
Fiona Loudoun thinks that there is a nice atmosphere at Luleå University of Technology and a nice community,.
"And the researchers are easily accessible. At the same time, many have been of great help to us, they understand that this it is also a challenge to move here. I have moved here with my family. And we are really enjoying our time living here”, says Michelle Bergin.
P4Play has four specializations. It is play as an activity, different places for play, people supporting play and to work with play in rehabilitation, and also how policies affect the possibility of play, for example guidelines from the state and municipalities.

The aim of the research is to develop new knowledge about play and play deprivation and at the same time investigate the effects of physical, socio-cultural and political influence on the possibilities for play. The aim is also to develop solutions to remedy what can prevent children from not being able to participate in play.