The thesis is based on interviews with 13 survivors of cardiac arrest, caused by infarction, and that did not occur in hospitals, between 1987 to 2007.

-Life should be good to live and it's important to have fun, they said that I interviewed. They were aware of the risk factors that could affect their health but still chose to have cream in the sauce occasionally, says Ann-Sofie Forslund.

She is a research nurse at the Norrbotten County Council and graduate student at the university. 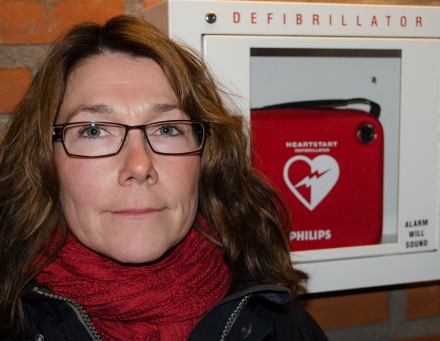 Ann-Sofie Forslund, a doctoral student at the university, has interviewed 24 people who survived cardiac arrest outside the hospital. The fackt that knowledge of CPR has increased in society has resulted in more people surviving cardiac arrest than in the past.

-They made an active choice and seems to think that "I choose to live fully as long as I can be," she says.

The interviews with people who survived got Ann-Sofie Forslund to think about health care advice to people who have had cardiac arrest.

-We're trying to inform about the importance of a healthy lifestyle. But the perspective that life should be good to live and feel meaningful may also be included. How do we make it feel important for these people to change their lifestyle, she says.

All 13 interviewees described almost verbatim the same way what they have been through.

In her thesis she also interviewed eleven people who recently survived a cardiac arrest. They were interviewed about a month after the stop, then after six months and finally after a year.

Having been rescued from death, had given rise to existential musings of them. What is important in life, what should you prioritize?

-That is not so easy to talk about for everybody. Care should perhaps raise the question, for example in the appointments made by a nurse after the arrest, says Ann-Sofie Forslund.

Heart stoppage had not made them fear death.

-No, no one felt any fear now. Death had been present in their lives, they were aware that they would not live forever, but they were not afraid, says Ann-Sofie Forslund.

On February 14, 2014 Doctoral dissertation Ann-Sofie Forslund her thesis A second chance at life. A study of survivors of sudden cardiac arrest.

Of the approximately 10,000 people annually suffer cardiac arrest outside hospital in Sweden, only about 500 survivors.
The number of victims has decreased over time, while the survival rate increased slightly.
One explanation for the increased survival is that the knowledge of CPR spread in society.

Fact: Eight out of ten were male

Ann-Sofie Forslunds research is based on data taken from the so-called MONICA study in northern Sweden and from interviews with survivors of cardiac arrest outside the hospital.
80 percent of those included in the studies were men, 20 percent women.
Seven out of ten cardiac arrests occur in the home.