He is very fond of a project he participated in that is about producing analgesia, based on knowledge of kungskobrans poison.

-It falls exactly within the framework of what we want to get involved with here at the university, we call it smart drugs, says Sitaram Velaga.

He came in contact with the project when he spent a few months at the University of Singapore in summer 2005.
The researcher from Luleå helped to solve the problem to package preparation active molecules in a tablet that could quickly dissolve in the mouth. 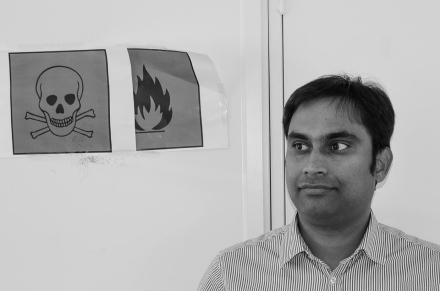 Sitaram Velaga ambition is to think outside the box. Unconventional solutions may be the answer to challenges like how medicine should be prepared to have less side effects.

-I do not know how far the project has come, but have seen reports of clinical trials of the agent to begin this year or next year, says Sitaram Velaga.

Since 2005 he has been building up research in Pharmacology at the Department of Health.

In March this year Sitaram Velaga was named professor.
The research in Luleå is conducted in collaboration with several institutions in the LTU, and with researchers at other Swedish and foreign universities.

It involves how medicine should be prepared for optimal effect.
Much of today's drugs have poor solubility in the body causing the bioavailability (the portion of the dose that reaches the target) is low.

This means that excessive doses of medication must be administered to patients with a risk of side effects.

-What we are doing is to try to improve the solubility and bioavailability. Then you can increase patient safety, says Sitaram Velaga.

Molecular size, crystal and particle structure are studied for researchers to get answers on what provides high bioavailability.
A challenge for scientists is to make targeted treatments using nanotechnology.
Medicine taken today spread throughout the body, which can sometimes cause troublesome side effects, such as stomach problems or headaches.

-If you could do drugs with nano-sized particles, it would be possible to get them to penetrate into the very cells where we want power. That would result in effective treatment for deadly diseases, says Sitaram Velaga.

He and his fellow researchers are now looking for funding in Sweden and abroad for research on smart drugs.

-I'm trying to use the expertise available at LTU, including the Human Health and Performance lab. We have scientists who are skilled in materials properties and measurement methods, both in the lab and in computer simulations, says Sitaram Velaga.

Lectures about research
On November 6, 2013 is Sitaram Velaga his inaugural lecture as professor at Luleå University of Technology.
The headline is: SMART Medicines: Solution for health?
Room: A 109
Time: 10:00 to 10:45

Educated in India
Sitaram Velaga, 38, received his basic education in pharmacy in India, and has since worked as a researcher and lecturer at the Swedish and Finnish universities.

What is pharmacy?
Pharmacy is a less familiar concept than pharmacology, the study of medicine. Pharmacy combines health science aspects of medicine and disease with knowledge of the chemical sciences, a necessity among other things, to produce the drugs and understand how it works in the body.