Cardiopulmonary resuscitation is trained on dolls. Knowledge can save lives.

Heart-Stat switch is in place. It is used in combination with CPR.

The concept of Cardiac Secure Zone has been launched by the Heart and Lung Foundation. As a condition of certification include access to defibrillators, and that there are personnel who have expertise in cardiopulmonary resuscitation (CPR).

At the campus in Luleå there is today eleven defibrillators deployed. Knowledge of CPR and how a defibrillator handled will now be spread among the staff.

A training session was initiated in mid-April, including staff from the Department of health sciences.

Cardiac Stat Arens electrodes are in place on the patient;s chest.

- There are 120 persons to be trained in this round, says Ulrica Strömbäck, a post graduate in  the Departement of Medical Science.

D-building, with the university's medical training, is scheduled to become the first building to receive Heart Safe Zone certification.

No case at the University

About 10 000 people is suffering from sudden cardiac arrest each year. Most occur in the home.

During the University's more than 40-year history has not at some time a sudden cardiac arrest occurred, as far as Marie Asplund-Höglund know.

Ulrica Strömbäck, course leader, during his time as a nurse used the defibrillator and know that it can save lives.

She still thinks the investment in defibrillators and training of staff is warranted.

- You can not put a price on a life. Would someone get cardiac arrest and survive because we have defibrillators so it is worth every krona invested, says Marie Asplund-Höglund.

The focus is not only beneficial to the university. The staff carry with them their knowledge even outside of work.

- It benefits all of society, says Marie Asplund-Höglund. 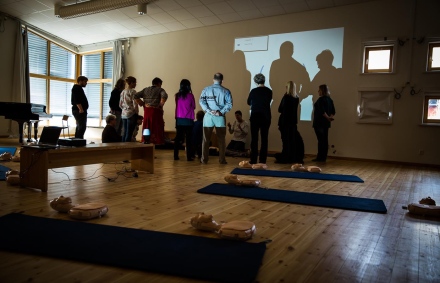 Knowledge of CPR is now spreading among university employees.

HEART SAFE ZONE INVOLVs
that there are procedures and preparedness to handle a sudden cardiac arrest and call the 112.
that there are skills in CPR so that help can be immediately deployed.
that staff know where defibrillators are and can handle it.
that treatment with defibrillators can start within three minutes.
that FRx is registered in Sweden defibrillator registry.

Five years ago, the survival rate was approximately three percent. The fact that more people survive is partly due to defibrillators become more common and that the knowledge of cardiopulmonary resuscitation increased.

Started relief operations within three minutes is a key factor in the chance of survival.

Link to internal training
The next CPR course with vacancies are May 28 Additional courses are going to Hosen.